The collection contains all manner of items from unique original pieces from the early days of Futuro through contemporary mass-produced items and everything in between. The collection currently (as of the date of the latest addition/update to this page) comprises 532 physical items plus 162 "digital" items (in particular digital copies of newspaper articles) and these pages are effectively the collection's "catalog".

Listed below are newspapers related to Futuro included in this collection. 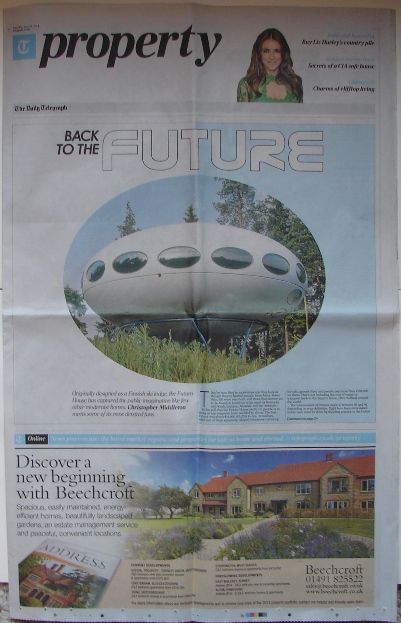 The English national daily newspaper The Daily Telegraph carried a nice article on the Futuro House in the Property Section of the 062814 issue. During our recent trip to Europe we were able to pick up a copy.

The article included a little general history along with commentary related to Craig Barnes' "Futuro 22" and was accompanied by several photographs.

We had been contacted by the author during his research and "yours truly" also gets a mention. To be honest we were a little misquoted and our standing in the "World Of Futuro" was definitely overstated but nevertheless we all get a little "stroke to the ego' when our "15 minutes of fame" comes along.

You can read the article online here. 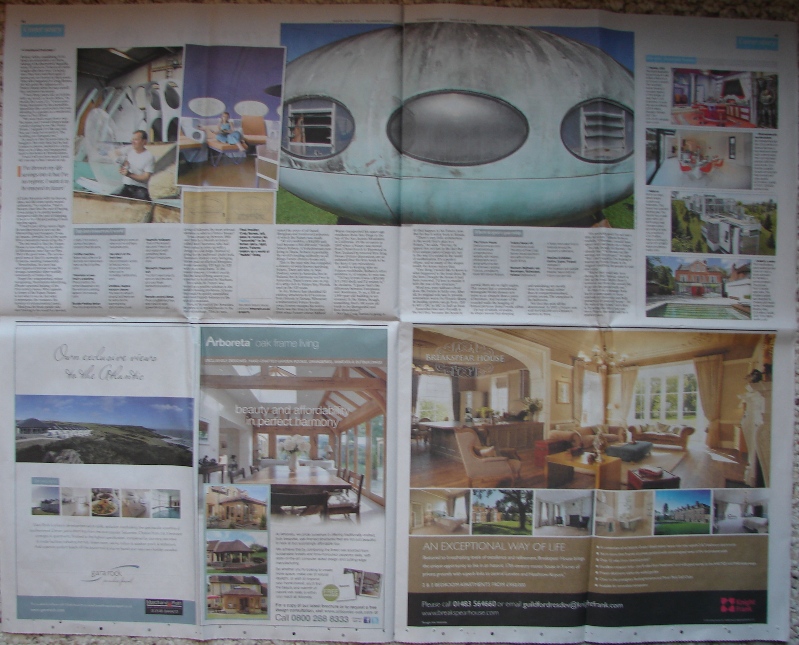 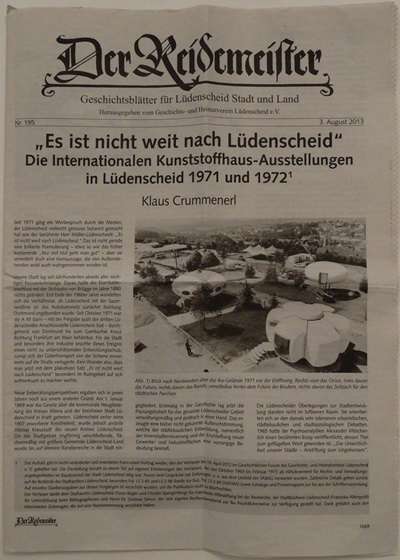 Issue #195 of the German publication Der Reidemeister includes an article that offers a great deal of detail relating to the Internationale Kunststoffhaus Ausstellung der Welt (though limited information specifically regarding the Futuro House) which took place in the German town of Lüdenscheid in 1971.

Der Reidemeister is published by local historical group Geschichts- und Heimatverein Lüdenscheid e.V.,. Our thanks to Rolf, secretary of the group, for sending us a copy of the publication which, while not technically a "newspaper", most closely resembles a newspaper in format and so is included in this section.

More information about the content of the article can be found in the IKA section of the Exhibitions Page. 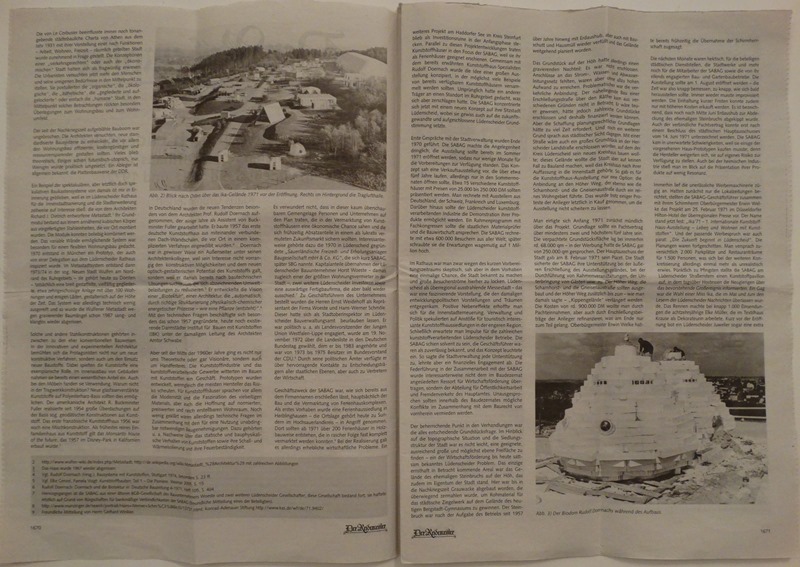 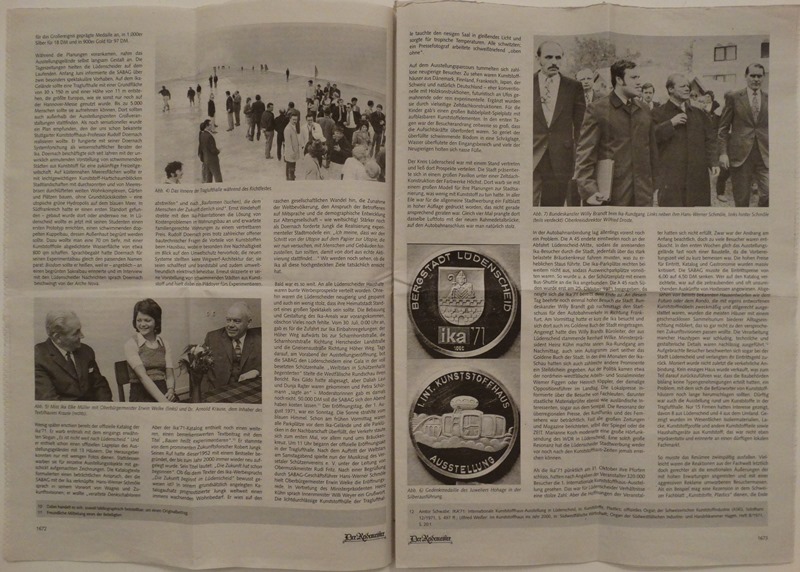 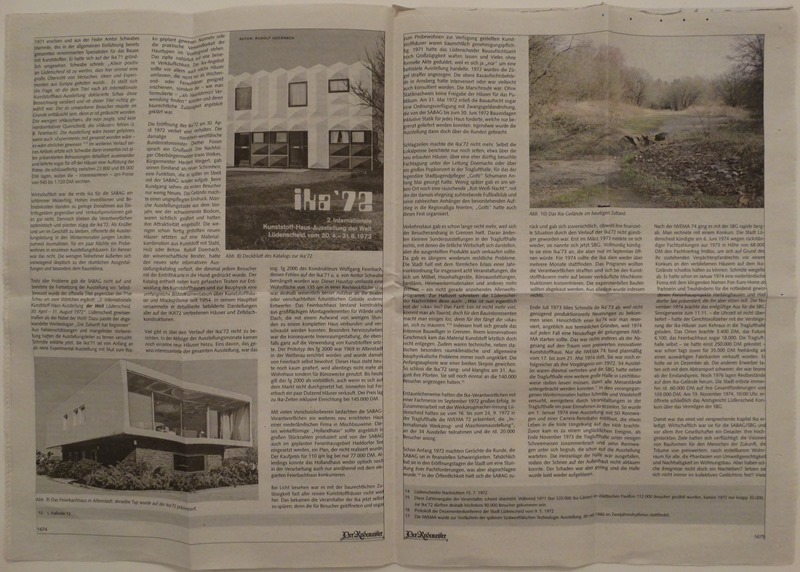 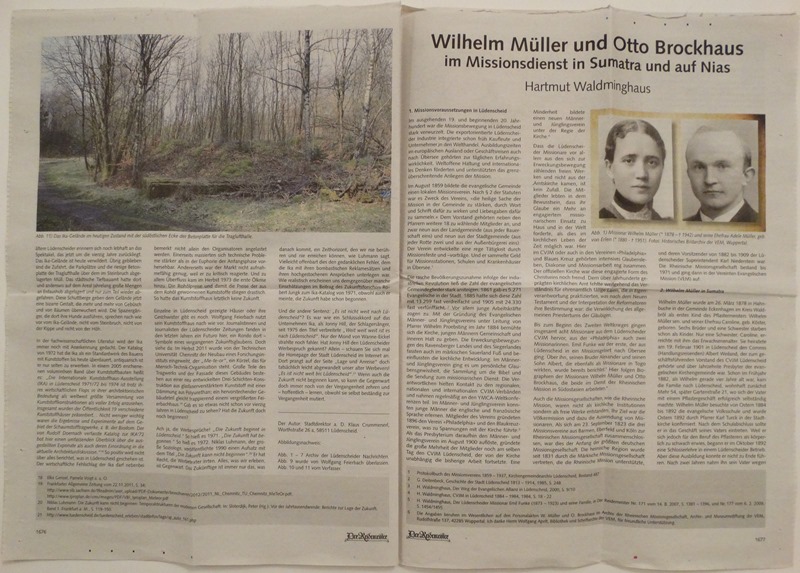 It turns out our memory was faulty (as increasingly seems to be the case these days) on this one. Marko Home emailed us and reminded us that Polykem had manufactured Futuros at a second plant in Ruotsinpyhtää after they had sold the original Futuro factory in Hiekkaharju which makes it most likely that the photo of a Futuro under construction was a shot taken in Ruotsinpyhtää.

As far as the suspect memory is concerned not only had we spoken to Marko about this before we also found two previous mentions of Ruotsinpyhtää on this very website; one on the Pöytyä page from all the way back in 2012 and a second from earlier this year in the entry relating to one of the Futuro brochures in our collection.

Volume 10 Number 4 of the Finnish publication RakennusViesti (which we believe is no longer published based on this site) included a short article on the Futuro House on page 7. The article is accompanied by two photographs; one of a Futuro under construction and the second of a disassembled Futuro being loaded onto a truck.

In the hopes of figuring out what the article says and in particular establishing where the photo of the Futuro under construction was taken as we do not think we have seen this location in a photograph before we plugged the text of the article into Google Translate. Google Translate however does seem to struggle somewhat with the Scandinavian languages and this translation was no exception; parts of the article did not translate at all and other parts were, even in English, very difficult to understand.

As far as we can tell the article does not really provide any new information; it seems to be a fairly typical article with general information about the Futuro. The article does mention the Futuro House known to have been displayed and open to visitors at the Stockmann Department Store (in the yard?) in Helsinki and it also mention the 1968 Finnfocus exhibition at which Futuro #002 (now located in Matsalu, Estonia) was displayed on board the Finnpartner moored next to Tower Bridge in London; it was largely this exhibition that created interest in the Futuro outside Finland.

Interestingly the article also appears to mention a "Swiss Futuro" which it suggests was a copy of the Finnish original but with rectangular windows; there are no further details though the article appears to suggest that such a copy is a measure of the interest generated in the Futuro outside Finland.

As for the photos we initially thought that the article was suggesting the photo of the Futuro under construction was the Stockmann Department Store one but then that was displayed inside and the photo shows a Futuro being constructed outdoors. The photograph's caption, we think, mentions Ruotsinpyhtää (which is around 100km or so east of Helsinki) but we have never come across mention of a Futuro at that location.

In the end we have to conclude that, at least for us, this location is unidentified and so we have added it to the Unknown Locations section of this site; hopefully someone will recognize the location and let us know at which time we will update this section. The caption on the second photo, which shows a disassembled Futuro being loaded onto a truck appears to indicate the photo was shot somewhere in Sweden (or perhaps that the Futuro was being shipped to Sweden?).

Frankly we do not have a whole lot of confidence in our translation of the article so if anyone feels inclined to check it out and maybe correct any errors we have made please click the translate icon above to send us an email; we will reply with hi-res images of the article that can be read. 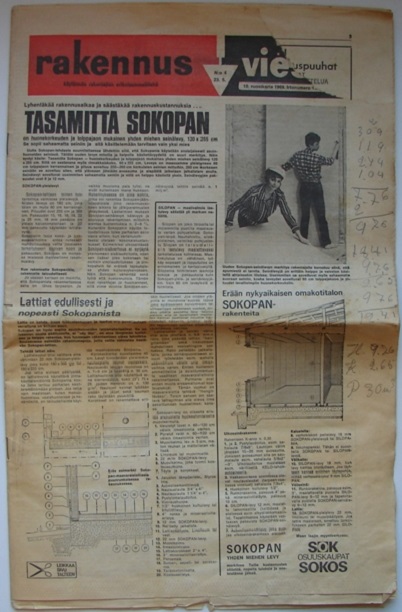 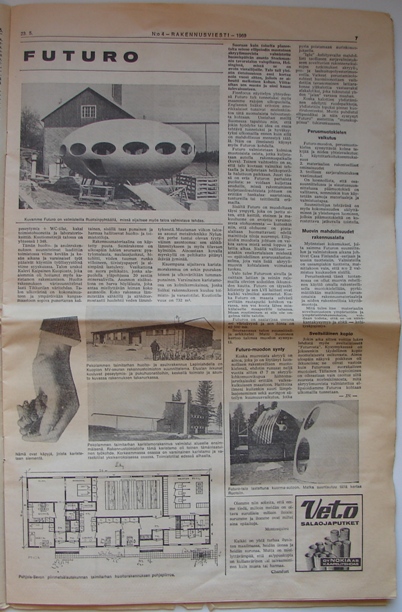 We think "Kolmen Kunnan Kuulumiset" was a small local Finnish newspaper. As best we can tell using Google Translate the title translates to "News of the Three Municipalities" with those three municipalities being Kiskon, Perniön and Särkisalon.

In the 061869 issue of the publication we see a small add under the heading Lahnajärven Lentävä Lautanen or, according to Google Translate, Lahnajärvi Flying Saucer which clearly references the Matsalu Futuro which was located in Lahnajärvi "back in the day".

The seller, a Finnish collectibles dealer from whom we have purchased several times, tells us the ad is for a Midsummer Party at the Futuro. 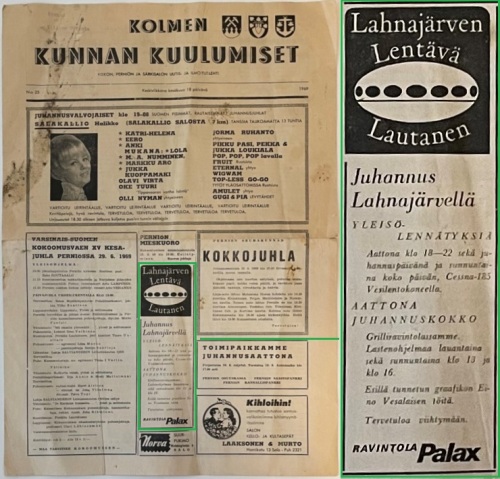 The 100971 issue of the now defunct Berlin newspaper Der Abend carried an article titled "Einfamilien-Kugel am Stadtrand gesucht" or, according to Google Translate, "Single-family sphere on the edge of the city".

The single photo that accompanies the article is of a Futuro House (we think the one displayed at the IKA) that is captioned, according to Google Translate "How a UFO landscape will look like a residential settlement on the outskirts of the city, when it comes to architects and manufacturers of spherical plastic houses."

Given the title and the photo you would have thought the article would be about the Futuro House but in fact it is not. It is actually a commentary on the benefits and dangers of "progress" in relation to the ecological effects of pesticides, plastics and the ever advancing chemical industry.

The Futuro is only mentioned briefly in the article (and not by name) which suggests that (again according to Google Translate) "for reasons of stability, the plastic house of tomorrow has no straight walls or pointed roofs, but rounded forms" and goes on to add that:

"In a few years, the following wording may be read in the advertisements of a newspaper: "Quiet bullet on the outskirts of the city." In Scandinavia there are already UFO-shaped plastic summer houses, and a Essen entrepreneur wants to have a cell-like synthetic house manufactured in Berlin" 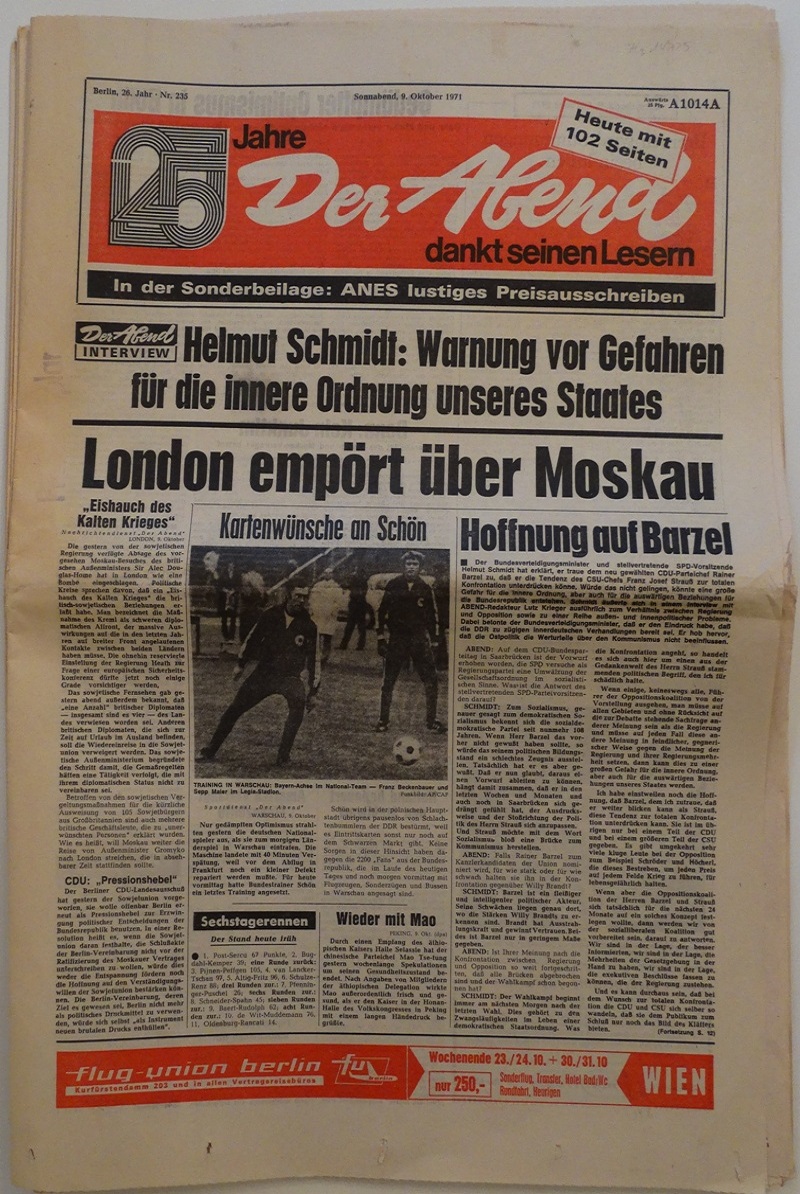 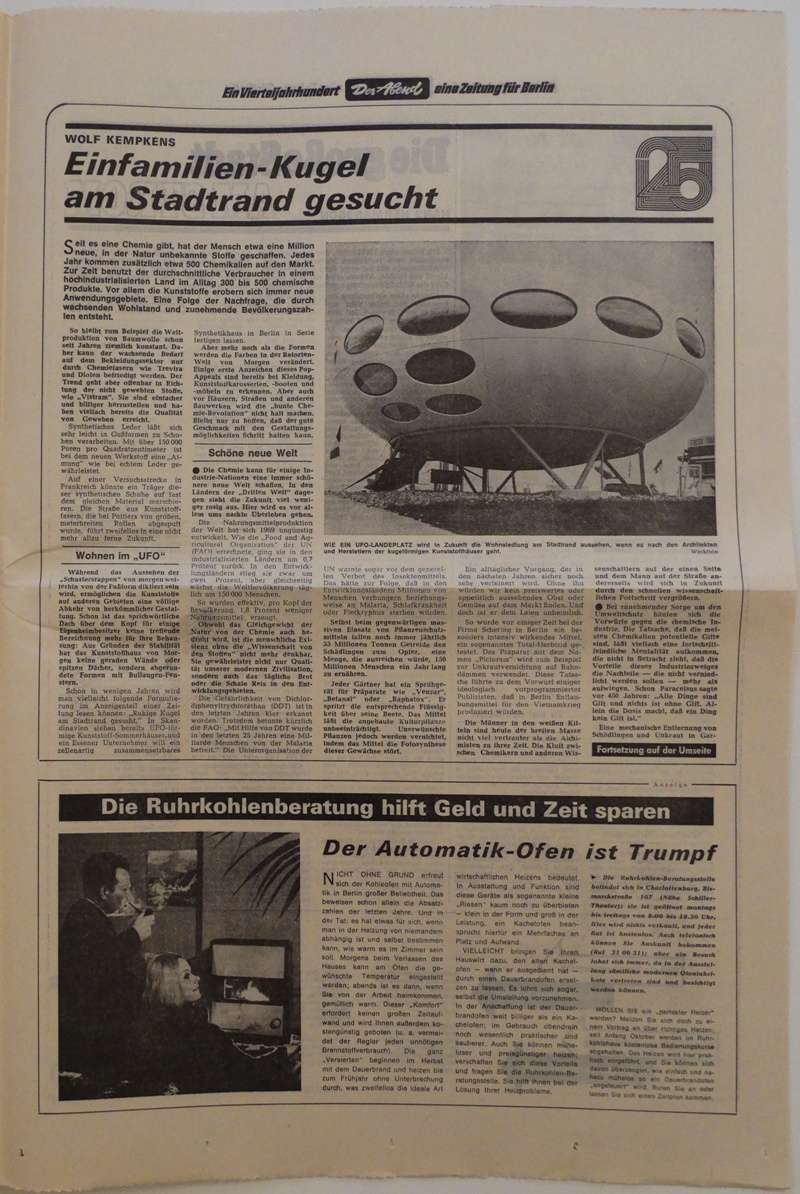 Helsingin Sanomat, published in Helsinki, is the largest Finnish daily newspaper. The culture section of the 062615 issue included a review of a TV show to be broadcast (we believe) that day.

As best we can tell (Google Translate does not do particularly well with Finnish) the show, to be broadcast on YLe TV1, was a rerun of a show called "Digiajan lapset telttailevat 1970-luvun Suomessa" or, according to Google Translate, "The children of the digital age in tents Finland in the 1970s".

There is a brief mention of Futuro in the text and a photo of Futuro #001 at the WeeGee Exhibition Center; it is unclear to us to what extent Futuro was actually featured in the TV show. 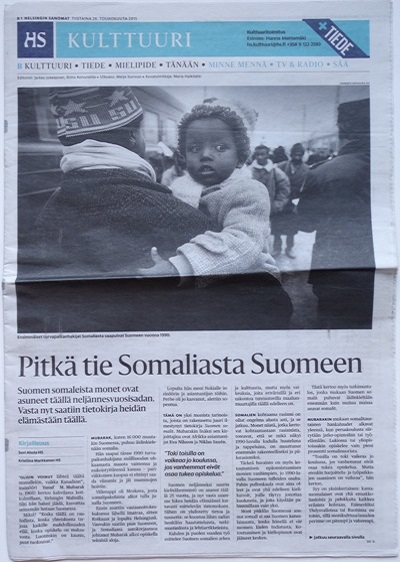 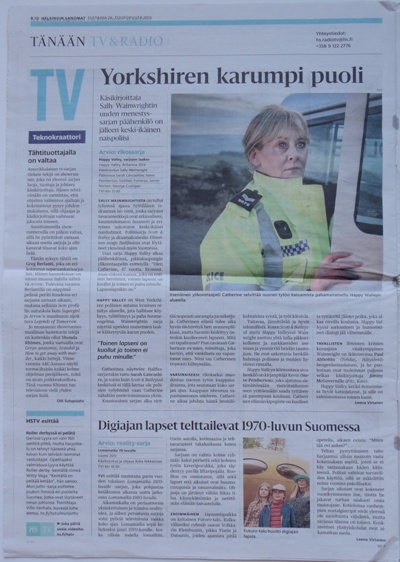 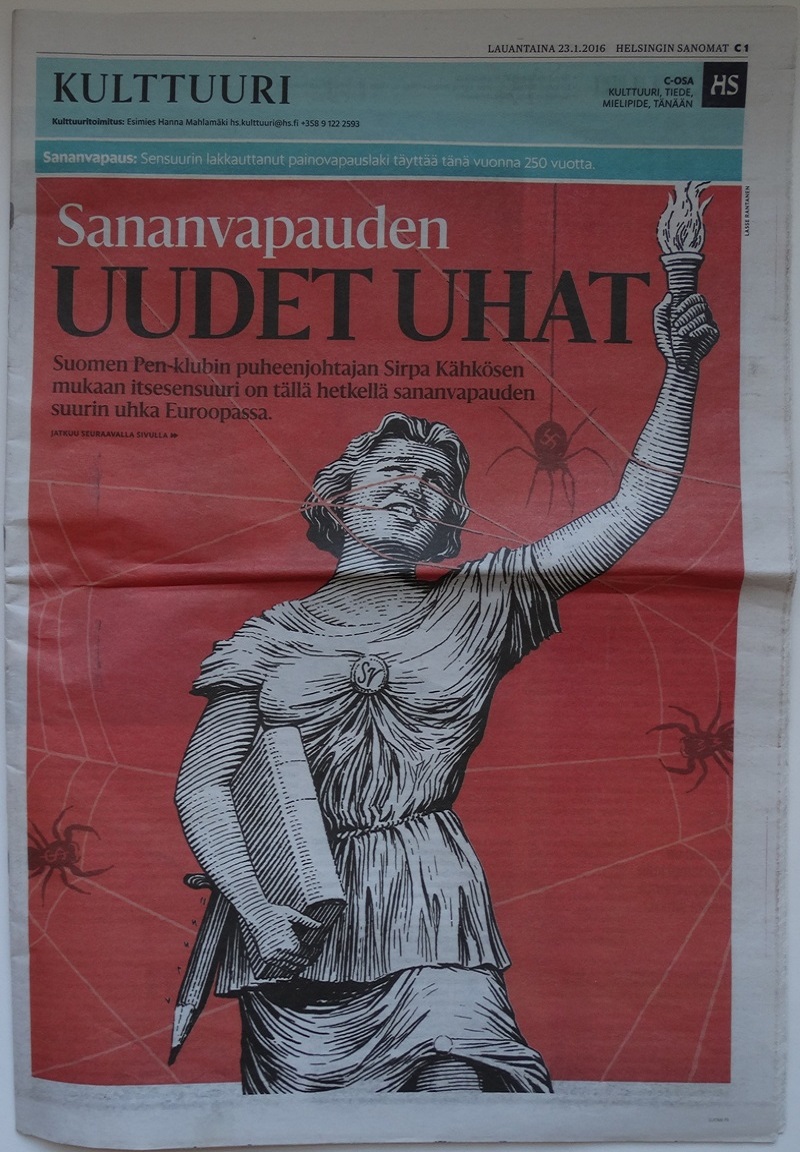 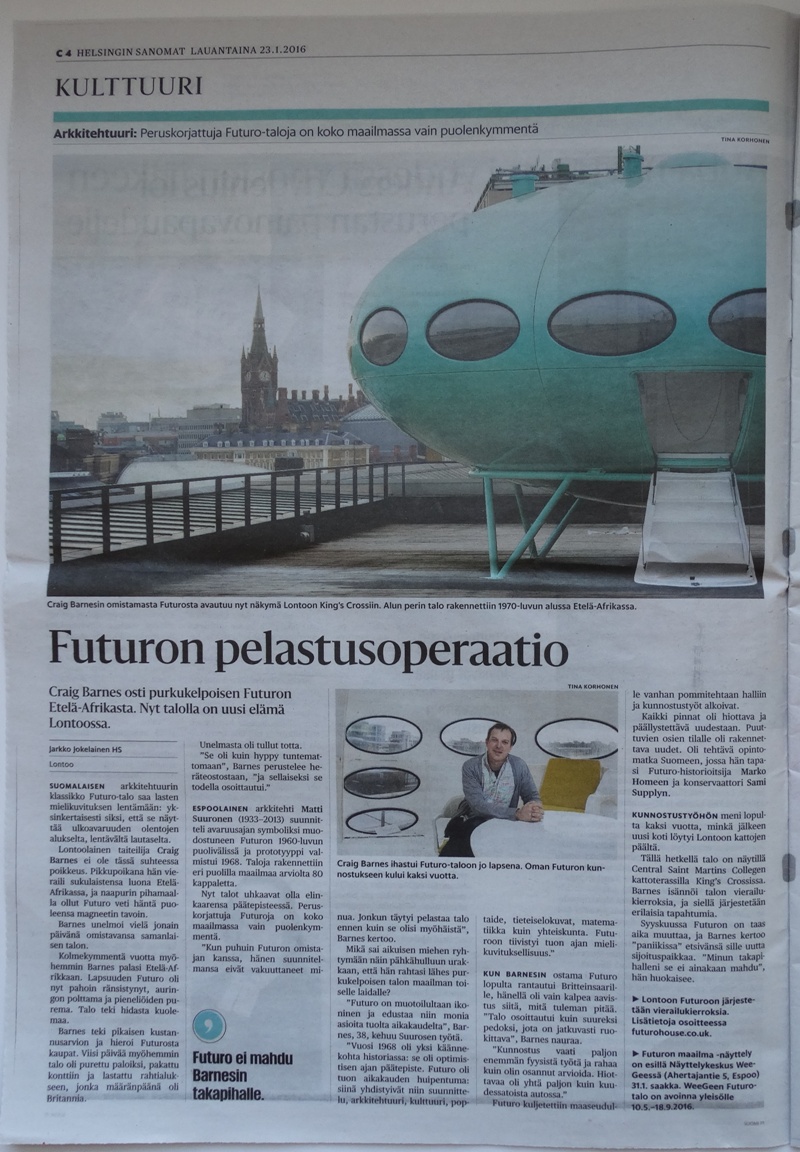 "the art of creating and distributing relevant content to your audience with a clear marketing objective in mind."

On page 8 of a June 2015 Helsinki issue that was distributed with Helsingin Sanomat, Finland's biggest daily newspaper, there is an article about the WeeGee Exhibition Center's "Futuro World" Exhibition which opened to the public 061615. 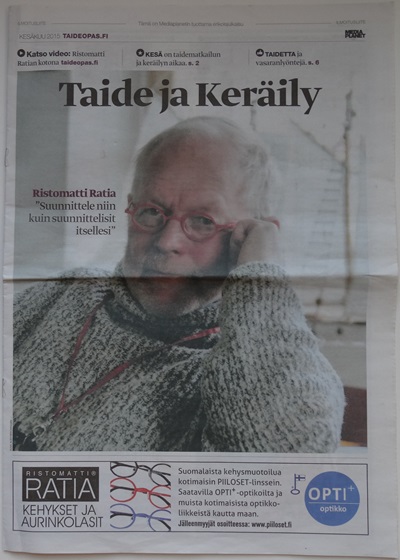 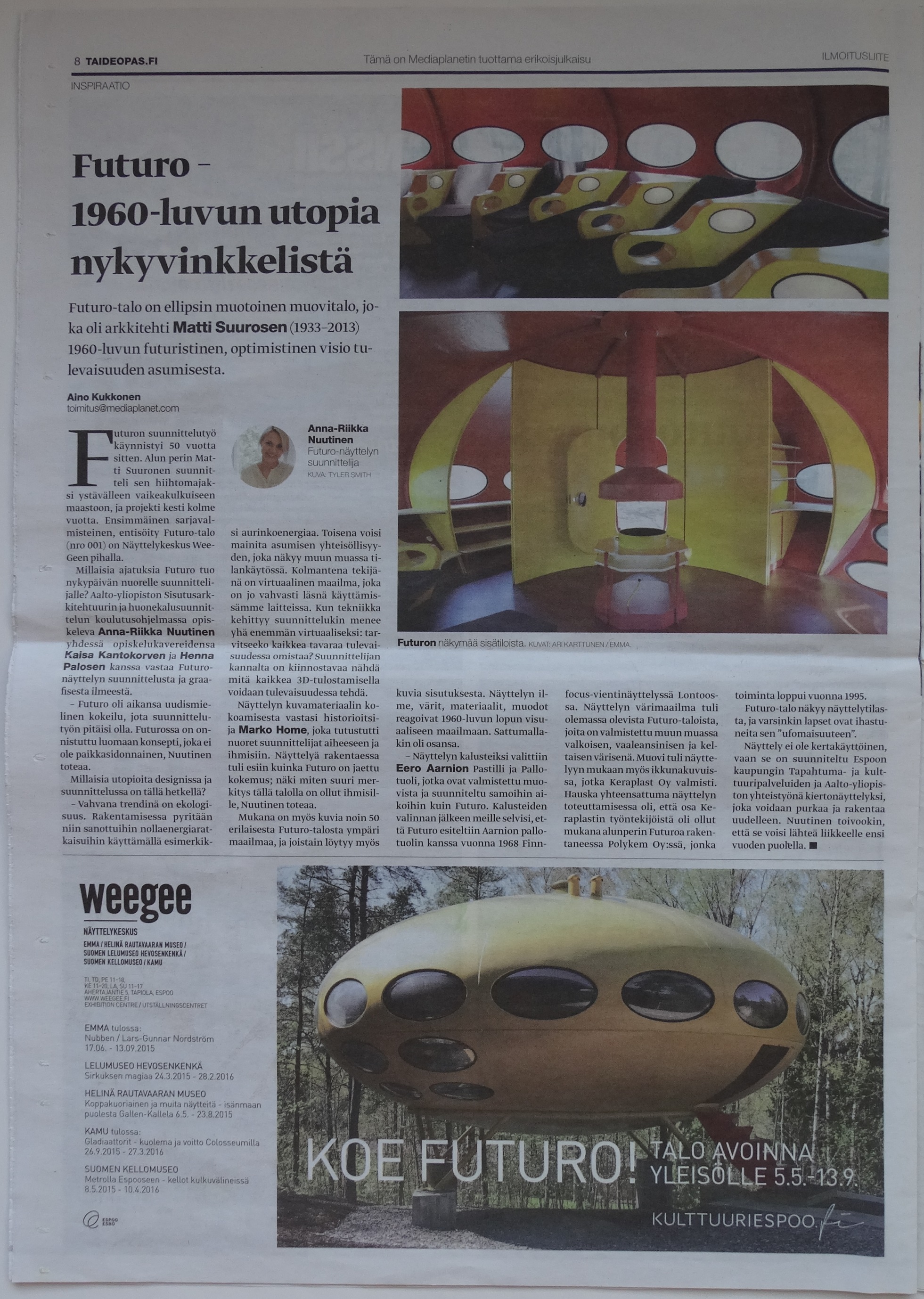 Metro International publishes freesheets in many countries, among them Finland. The 050815 issue of Metro Helsinki includes an advertisement for the WeeGee Exhibition Center. 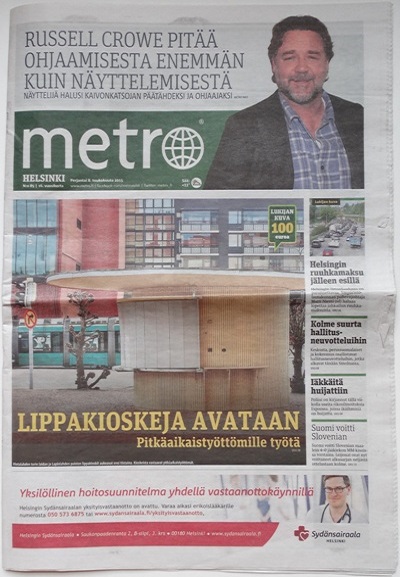 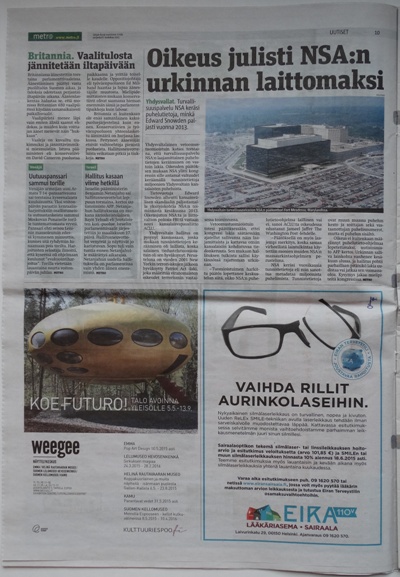 Volume 10 Number 6 of the Finnish publication RakennusViesti (which we believe is no longer published based on this site) included a short article on the Tampere Fair on Page 16. A Futuro was exhibited at the fair (070469-071469 according to futuro-house.net) and the article includes a very short paragraph on the Futuro House.

As best we can tell using Google Translate (which often struggles with Finnish) the article notes that the Futuro was one of the most popular exhibits at the fair and then refers readers to Volume 10 Number 4 of RanennusViesti for an article with more detail (copy here).

The article is accompanied by one photograph which shows a location we do not believe we have seen before and we are assuming we are seeing the Futuro as exhibited at the Tampere Fair. 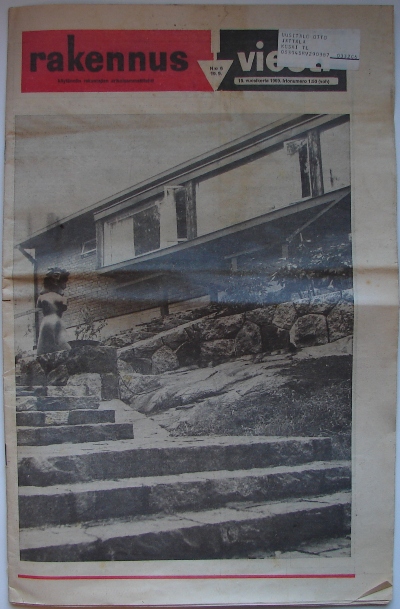 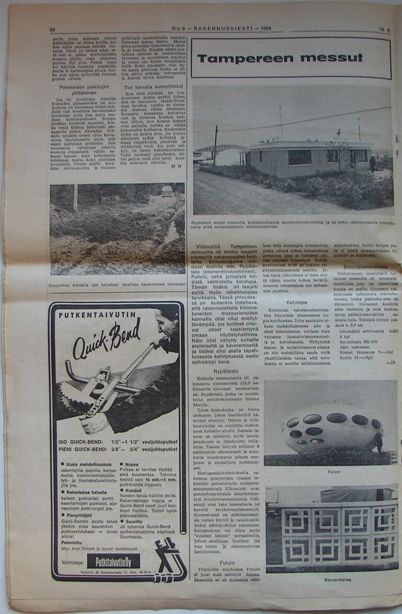 The June/August 2012 Issue of Voima, a free monthly tabloid newspaper published in Finland, contains a small article with a single photograph on Futuro #001 located at the WeeGee Exhibition Center in Espoo, Finland. 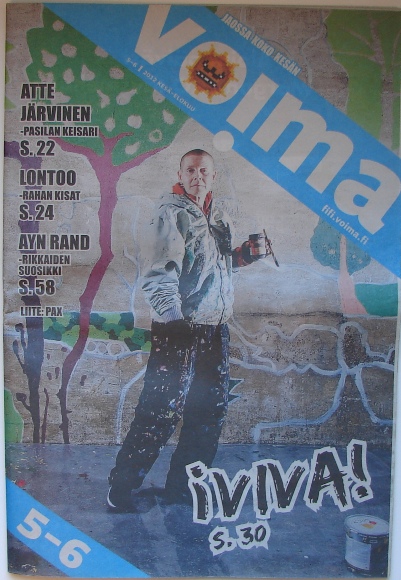 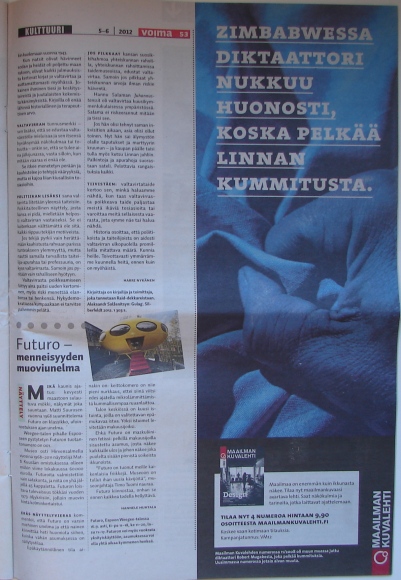