The collection contains all manner of items from unique original pieces from the early days of Futuro through contemporary mass-produced items and everything in between. At the time of the latest update to this page the collection comprises 465 physical items plus 158 "digital" items (in particular digital copies of newspaper articles) and these pages are effectively the collection's "catalog".

Listed below are sales materials/brochures included in this collection.

This item is an original French language Futuro Flyer (single sheet printed on both sides); though we do not know exactly it is almost certainly from the early 1970's. On the front (?) the flyer lists the "technical specifications" of the Futuro House (though in general terms rather than specific detail) and on the back (?) there are schematics showing the exterior elevation and a typical internal layout.

At the bottom of the text on the front (?) there is a statement that tells the reader to "contact us" with any questions but the flyer contains no contact information. Though only a theory that suggests to us that this was probably a technical insert in a package that contained more materials; marketers today, and likely back in the 70's, often put together a promotional folder that includes various inserts providing information on different aspects of whatever was being publicized.

We will be trying to research this further though it may be hard to find out any definite information. If you know anything about the background of this piece please let us know.

The flyer is in French; we have entered the text into Google Translate to get a rudimentary translation (download pdf file). All machine translations are a little suspect so the translation is clearly not anything like 100% accurate; at some point we will get a "real" translation. If you have such a translation or can help create one it would be much appreciated. 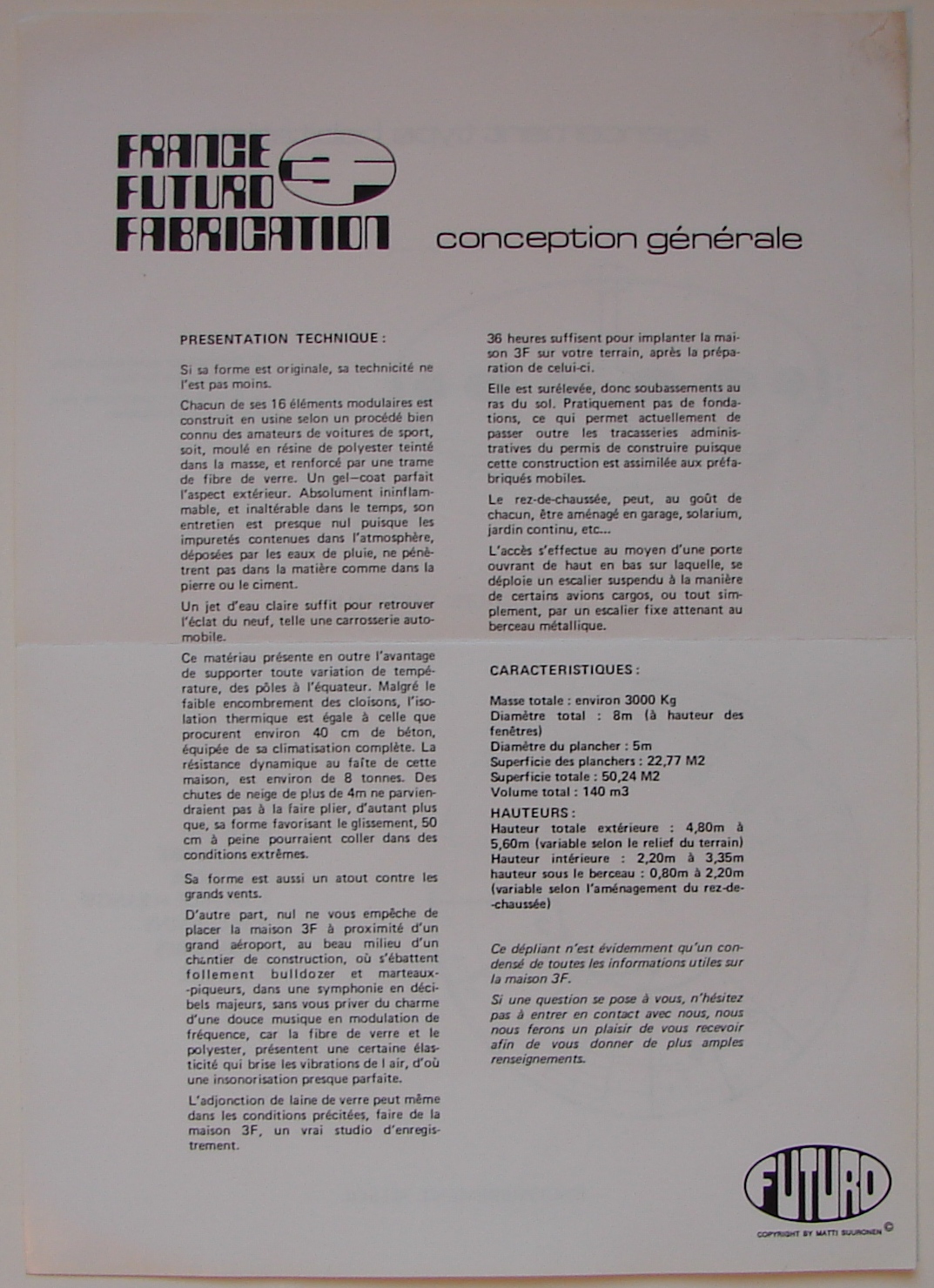 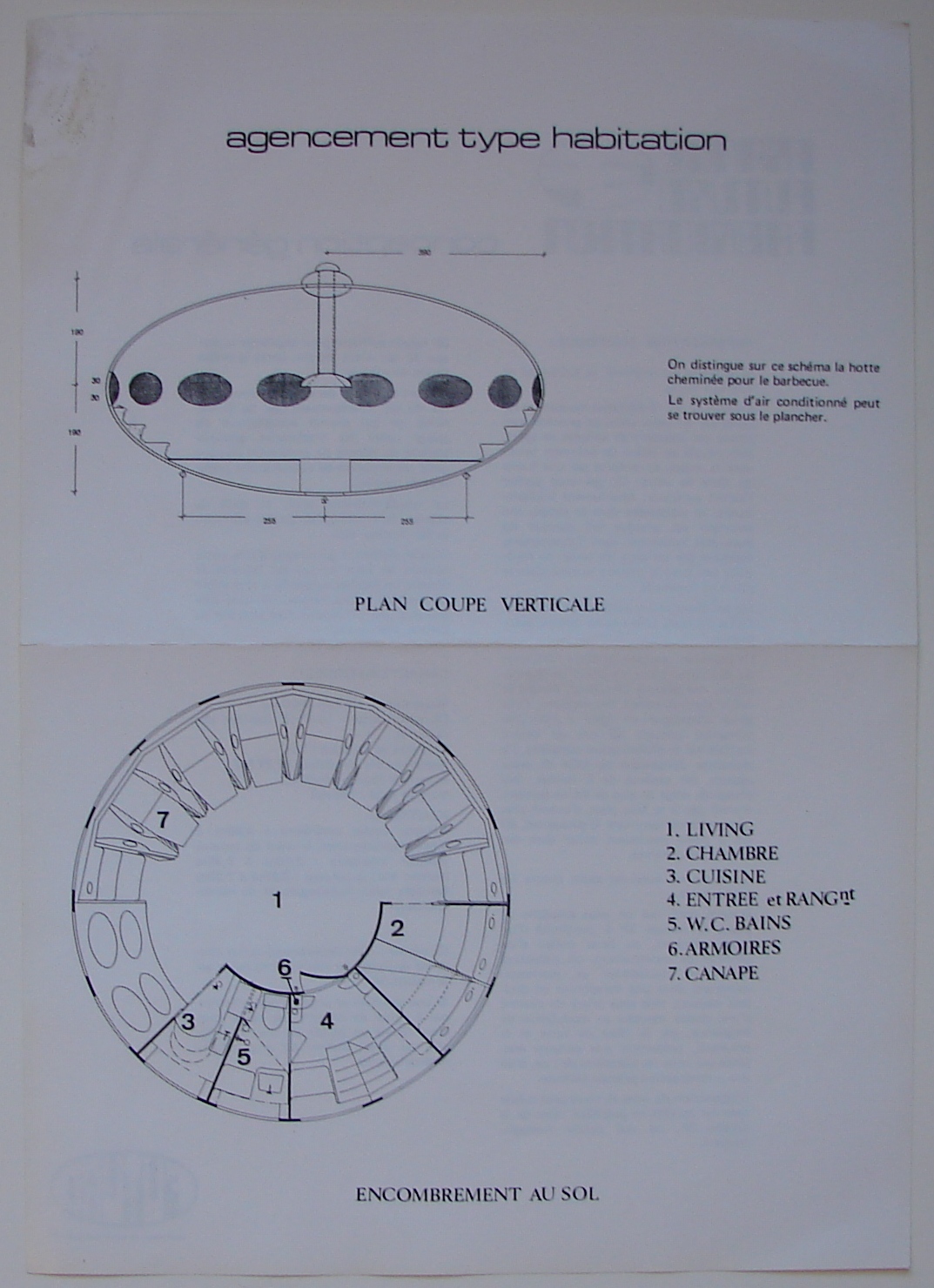 
This is what we believe is an original Futuro brochure; presumably from the early 1970's. The brochure features 4 pages; the front shows a photograph of a Futuro (though black and white it looks like a "mirror image" of the photo seen in color in the book Where's My Space Age?). There are three photos and a schematic inside and a floorplan on the back.

The brochure was originally from the Futuro Corporation, PA (this is printed on the front) but it appears that it was actually distributed by a Delaware distributor. There is a "stamp" on the front (very faint and impossible to read in the photograph) that reads "New Dimensions Inc. Distributors For Futuro Fiberglass Homes, Route 1 Box 272, Milton, Delaware 19968. 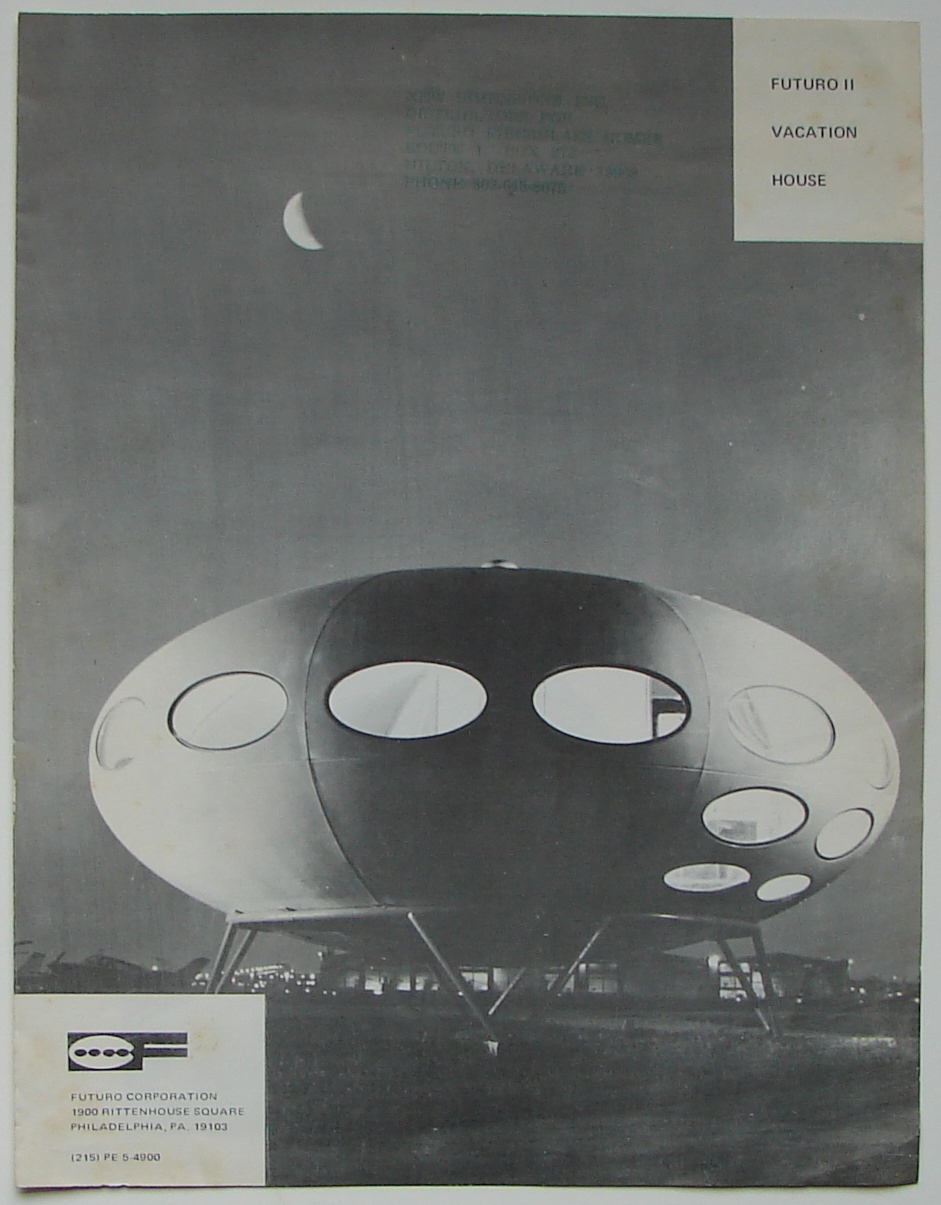 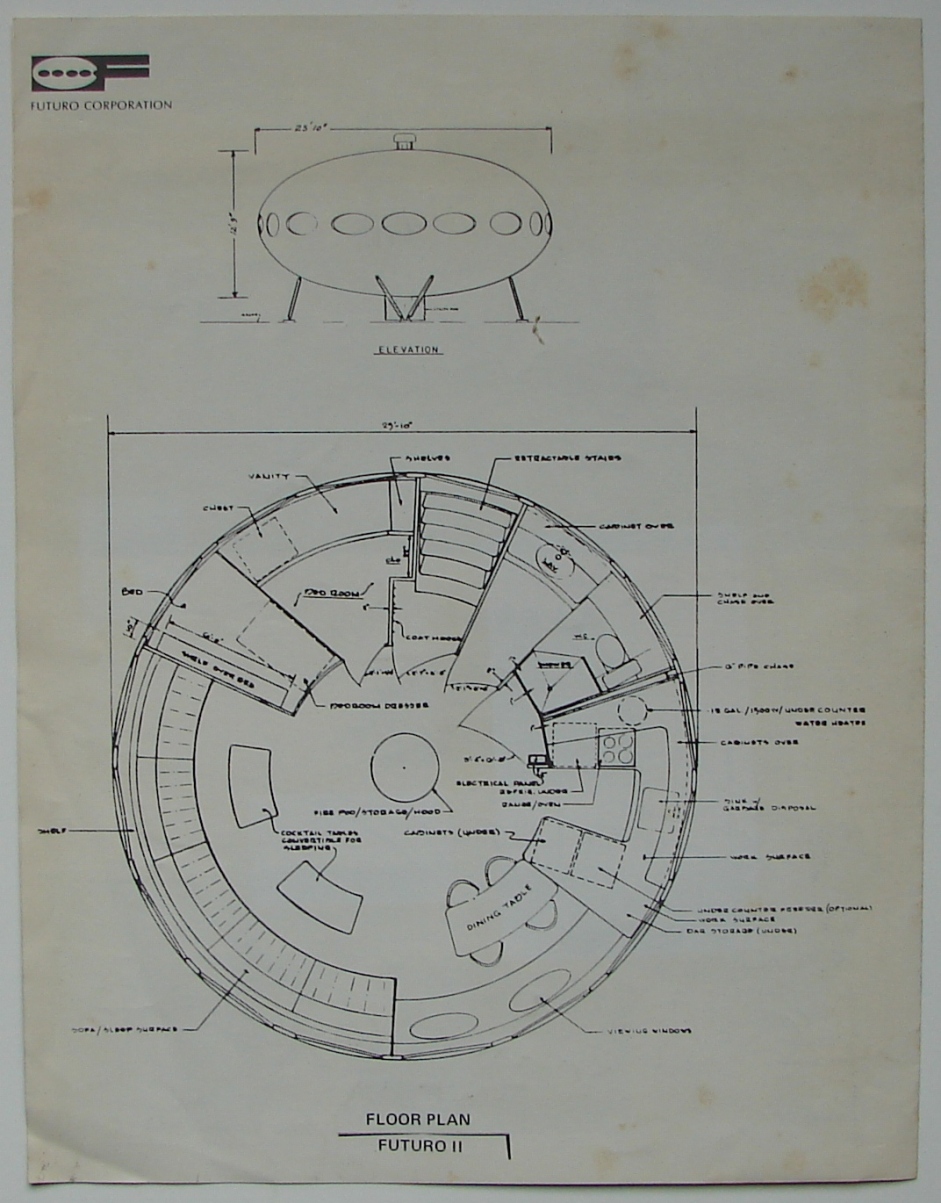 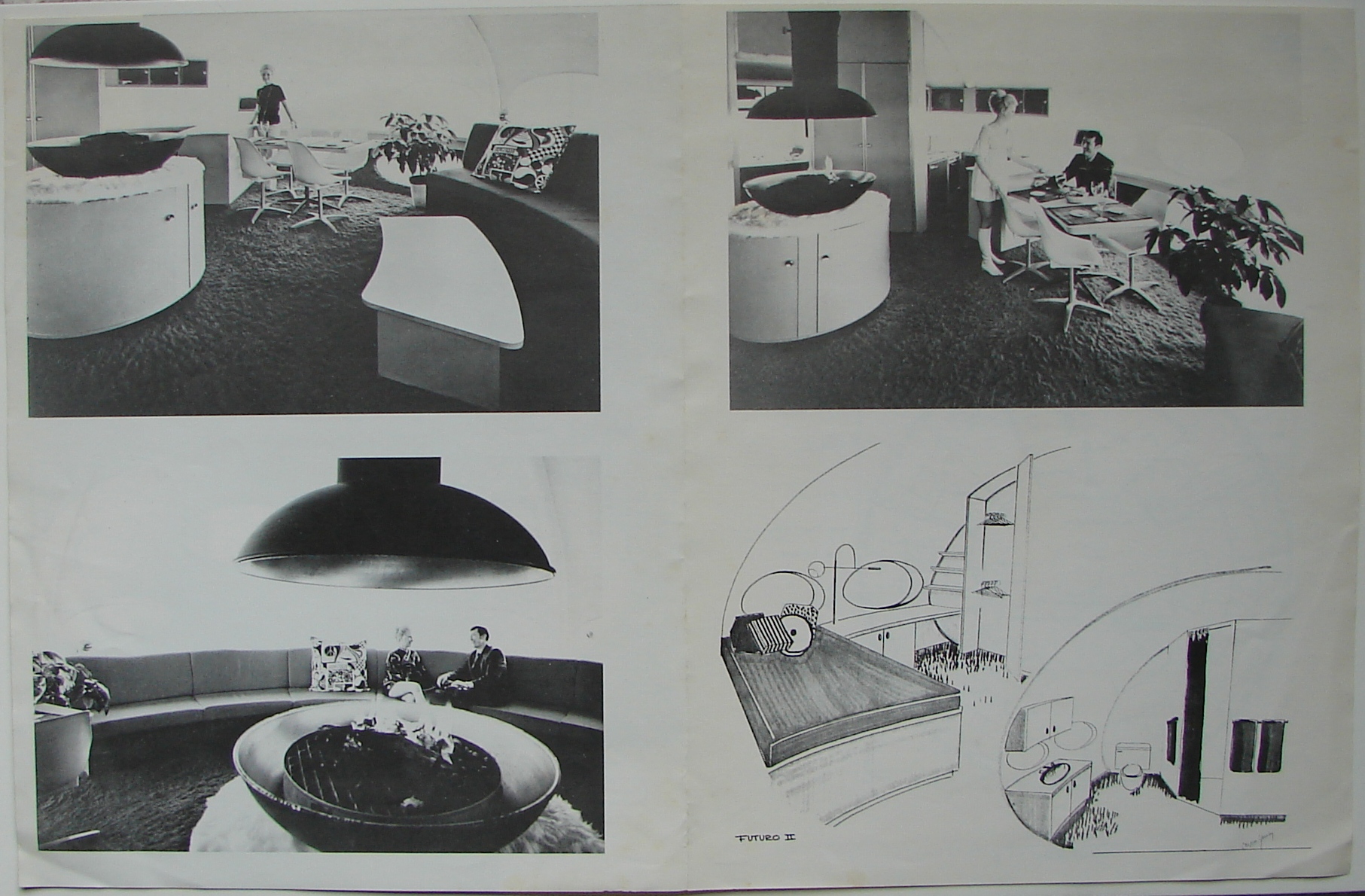 
This is an Advertising Trade Card featuring a photo of a Futuro that was displayed at the Illinois State Fair in Springfield, Illinois in 1970.

We believe this is the Futuro that is now located at The Pink Elephant Antique Mall in Livingston, IL and was previously located just north of Springfield, IL.

The "trade card" was clearly designed as a tool for would be purchasers to indicate their interest to the dealer by marking their specific area of interest and returning the card to the dealer. Interestingly while the printed reverse side of the trade card included check boxes to indicate area of interest, the address of the dealer and space for a postage stamp it did not actually include an area for the interested party to provide a means of contact.

The reverse of the trade card is titled:

and the dealer is listed as:

The check boxes for the interested party to indicate a particular area or areas of interest include the following (they clearly had some ambitious plans):
We actually had this in our collection in 2014 but traded it with another Futuro collector for multiple Futuro related items; it has taken us 6 years to find a replacement! 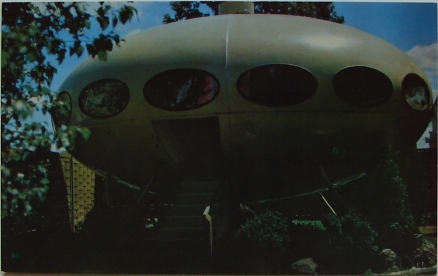 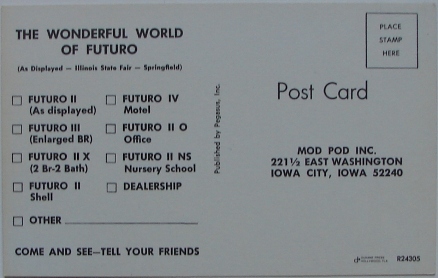 During a trip to see Futuro #001 at the WeeGee Exhibition Center in Espoo, Finland on 070814 we visited with Marko Home, Futuro Historian and co-editor of the book Futuro: Tomorrow's House from Yesterday. During that visit Marko kindly gave us a copy of the brochure seen here; a 1969 Polykem Brochure (Thank you Marko!).

We were surprised at the condition of the item; it was perfect, and wondered if it was actually a modern reprint but Marko informed us it was indeed original. It was actually found in an unopened cardboard box at the abandoned Polykem factory in Ruotsinpyhtää, about 100 kilometers west of Helsinki (Polykem made Futuros in two factories, first at Hiekkaharju in Vantaa and later at Ruotsinpyhtää in Loviisa).

What is most interesting about the brochure is that it shows that by as early as 1969 the Futuro was already being marketed in a much more sophisticated model than the rather primitive and rudimentary initial offering. Futuro #001 in Espoo is restored to the original 1968 specs; compare the illustrations on the brochure to photos of the unit at Espoo and the differences are clear. 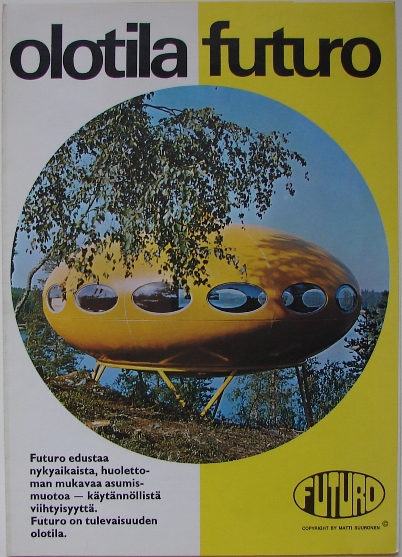 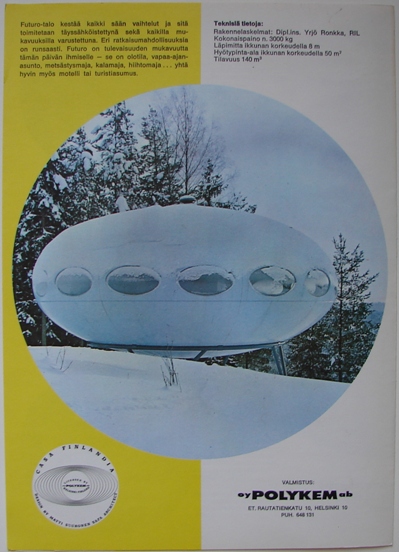 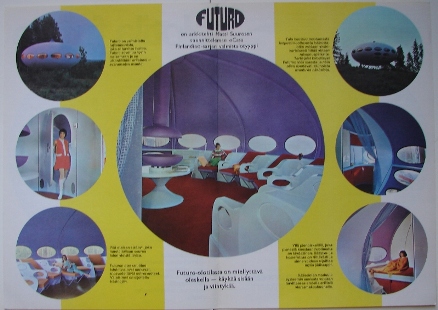 
This item is a "folder" which has no markings or text on the back or inside; the front carries the image seen below and the text:

Or according to Google Translate "France Futuro Fabrication - A space residence at the forefront of our civilization".

The item was sent to us recently by fellow collector and Futuro enthusiast Yves Buysse; many thanks Yves - makes for a very cool addition to this collection.

The item is a folder that we think would have been used to pass out marketing and/or sales materials or flyers to prosepctive customers; that is of course an assumption but we have seen such folders used in this manner over the years. Unfortunately the "contents" are long gone. 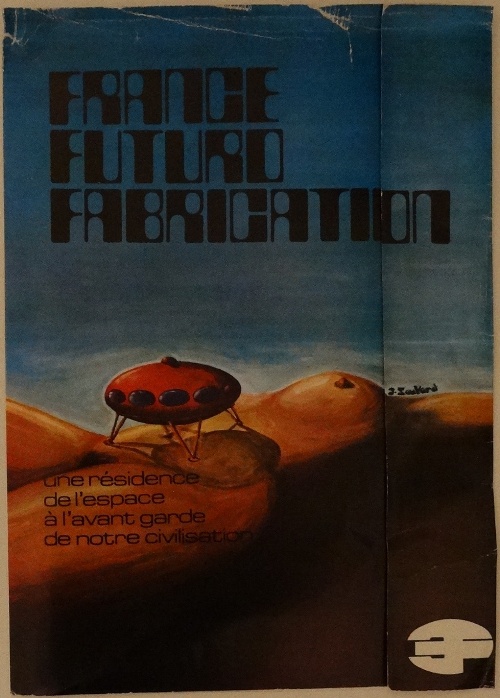