The collection contains all manner of items from unique original pieces from the early days of Futuro through contemporary mass-produced items and everything in between. At the time of the latest update to this page the collection comprises 513 physical items plus 161 "digital" items (in particular digital copies of newspaper articles) and these pages are effectively the collection's "catalog".

Listed below are catalogs & guides included in this collection. Note that any publication that might, on the face of it fit this category, that has an ISBN number will be listed in the appropriate books section rather than in this section.

We had often thought, based on timing and photos, that the Futuro exhibited at MUDAM and subsequently sold at Christies was likely the one now located in Limni, Corfu but we could not be certain. In an email we received this week the Futuro's owner, Dakis Joannou, confirmed that this was the case.

On 112707 world famous auction house Christie's held an auction in Paris (Christie's Auction #5483) entitled Arts Décoratifs Du XXème Siècle Et Design. Lot 391 of this auction was a Futuro House. This is the Christie's Catalog for that auction.

Much of the history of the Futuro House can be unclear and at times what information there is can be confusing or even contradictory. When determining what is or is not fact one is often left basing an opinion on the credibility of the source of that information. The Christie's Catalog provides some history of the unit that was auctioned and it seems to us that as a premiere international auction house it is almost certain that whatever information they provided was fact.

So, what does the catalog tell us? Christie's recounts that the Futuro that was auctioned was one of the few that was produced directly by Polykem, executed under Belgian-Benelux license. There are several references to there being three Futuros in Belgium (see the Tildonk Futuro page for more details) in the early 70's and most suggest they were initially together at a single location; you can find a Press Photo of the three Futuro's here and there is also a very similar photo in the April 2001 issue of Casa Brutus Magazine.

In addition Christie's tells us that this Futuro House was the one exhibited in as part of a 2007 exhibition at the Grand Duke Jean Museum of Modern Art (known as MUDAM) in Luxembourg City, Luxembourg. The exhibition was titled "Tomorrow Now - When Design Meets Science Fiction" and it ran from 052507 to 092407.

The Futuro was listed for €150,000-200,000; at the auction it did not quite get into that range but it did sell for a rather impressive €140,000. The buyer and the eventual destination for the Futuro remains unknown, at least to us. Interestingly the Christie's webpage that lists the results of the auction does not include all of the lots and Lot 391, the Futuro House, is one of the ones that is not listed.

Of course having said that the catalog provides us with some factual information it also adds to the "mystery". We had previously though that the Futuro displayed at the MUDAM exhibition was the Belgian Futuro owned by Philemon Vanlangendonck and there is evidence to support that theory - see page 4 of this file. However for that to be the case it would also have to be the one sold at auction in 2007 yet Philemon Vanlangendonck reportedly continued to own his Futuro long after 2007 and in fact still owns it as far as we are aware (based on emails received at the end of 2012). 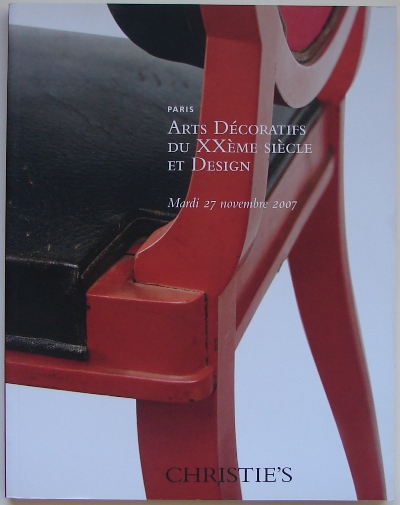 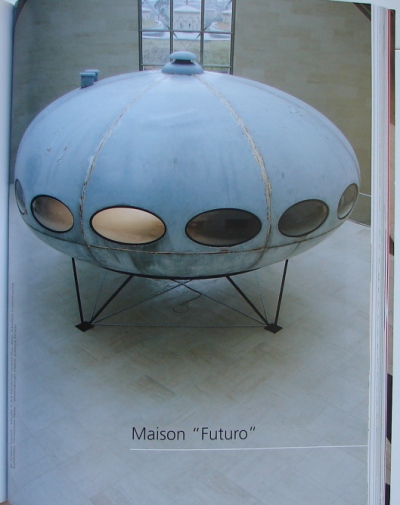 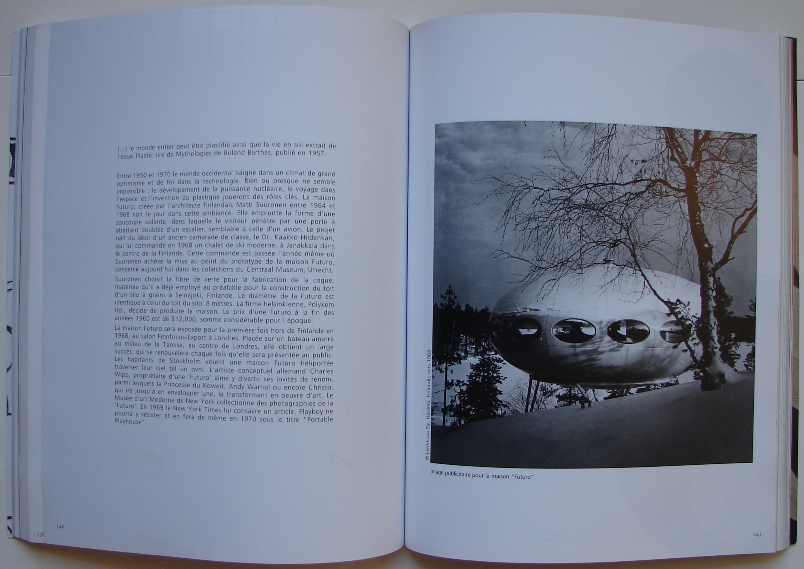 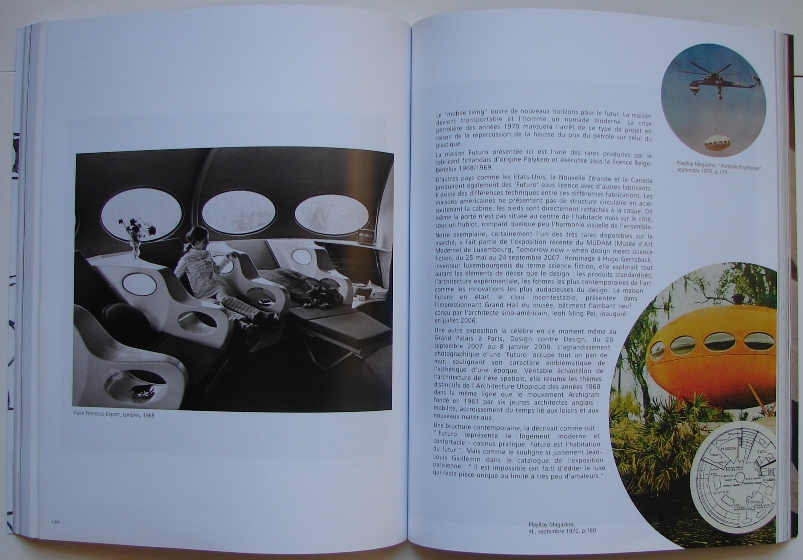 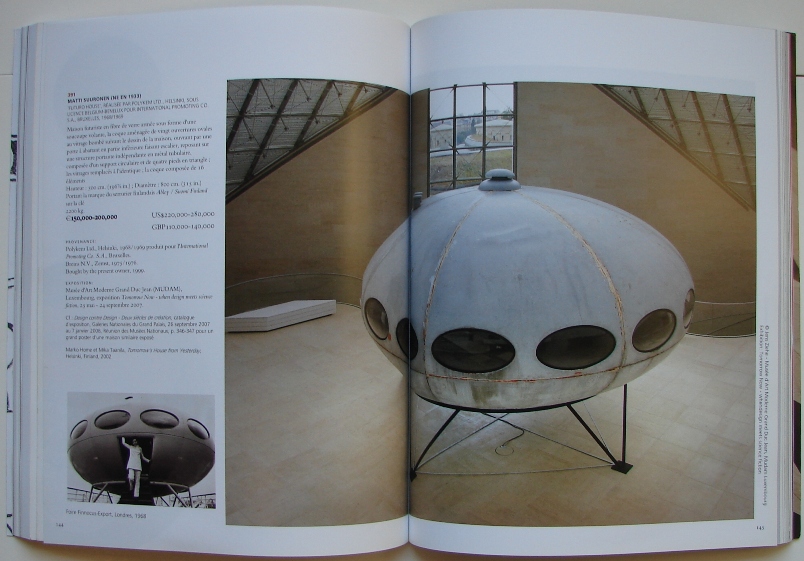 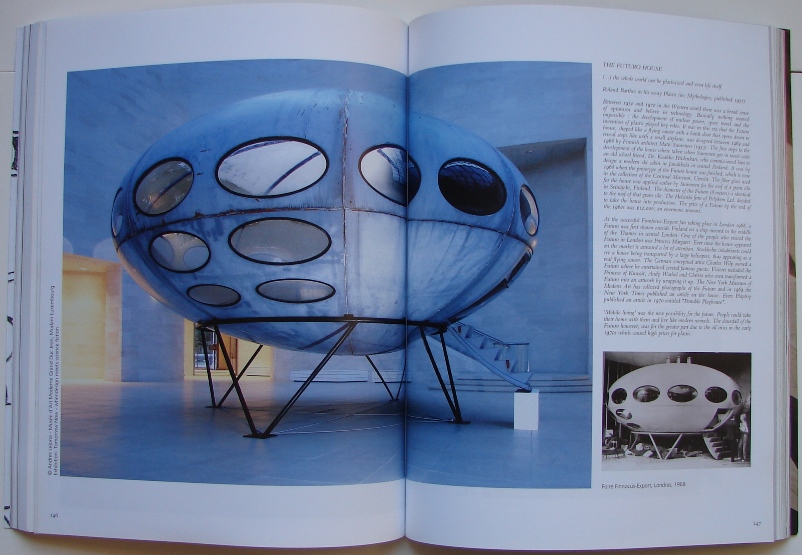 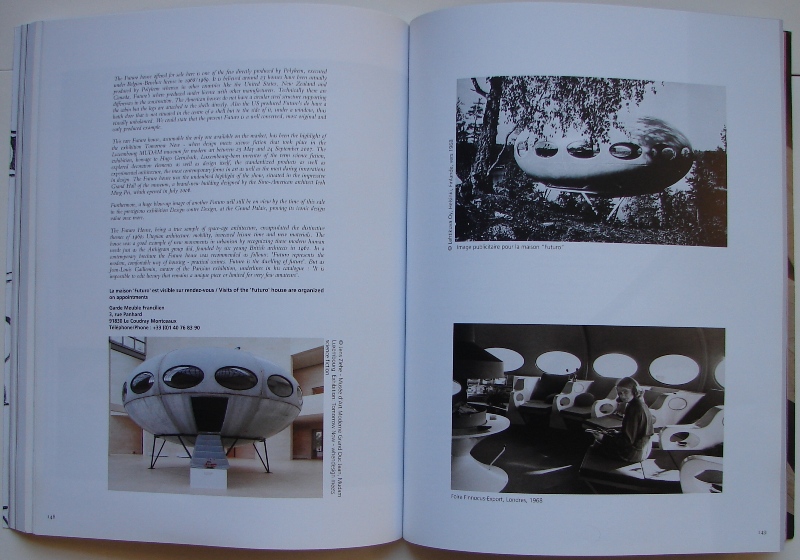 
This is the catalog for the exhibition "Plastic As Plastic" which ran from 112368 through 011269 at the Museum of Contemporary Crafts (now the Museum of Arts and Design) in New York City.

On page 3 of the catalog there is a photo of Futuro #000 in Turenki (which has a rather odd yellow tint to it). In the brief caption that accompanies the photo the structure is actually referred to as the "Futuro Weekend House". 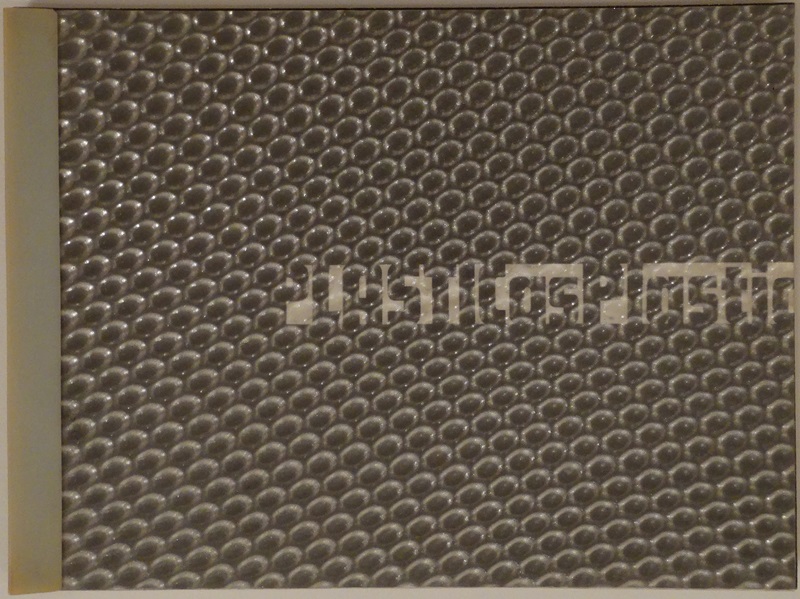 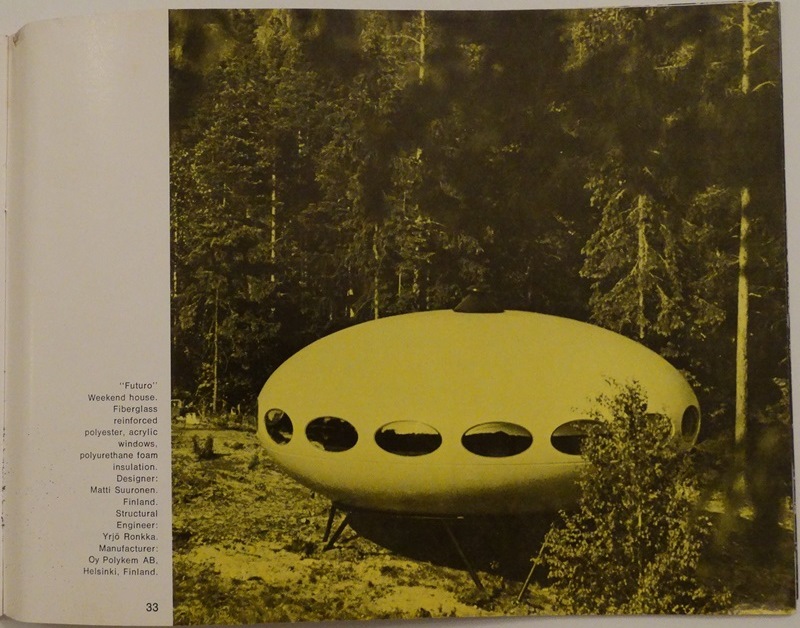 
In 2017 the French city of Le Havre hosted "Un Éte Au Havre" (or "A Summer In Le Havre") during which various art works and installations were added around the city apparently to increase tourism.

The event was repeated in 2018 and now appears to have been added to the cities calendar as an annual event.

During the 2018 event Craig Barnes' UK Futuro was transported to Le Havre and installed in Les Jardins Suspendus (The Hanging Gardens).

This is the guide book for Un Éte Au Havre, 2018; the Futuro features on the cover and then on pages 7 and 16-17. Fellow Futuro collector and enthusiast Yves Buysse sent us this copy for our collection; many thanks Yves. 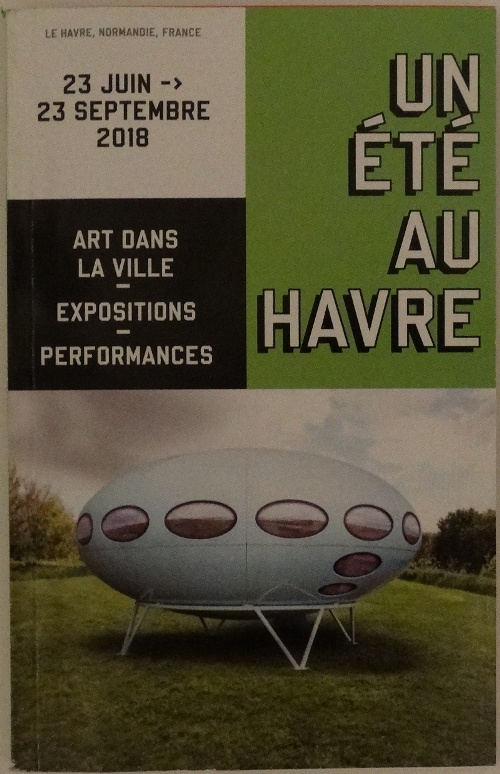 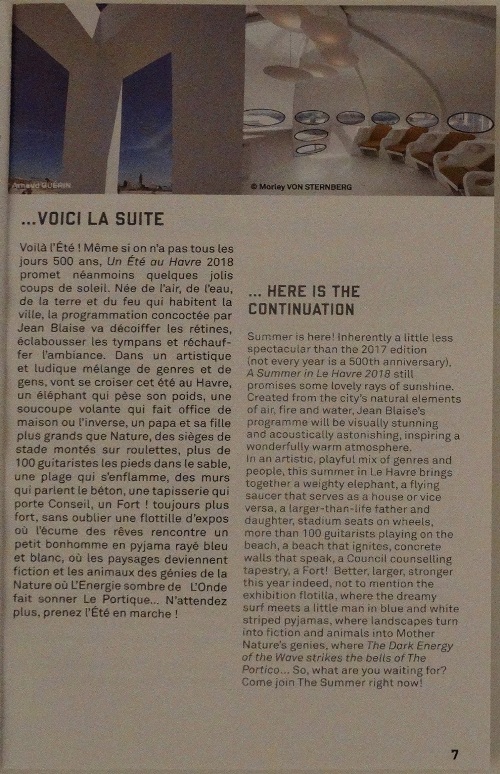 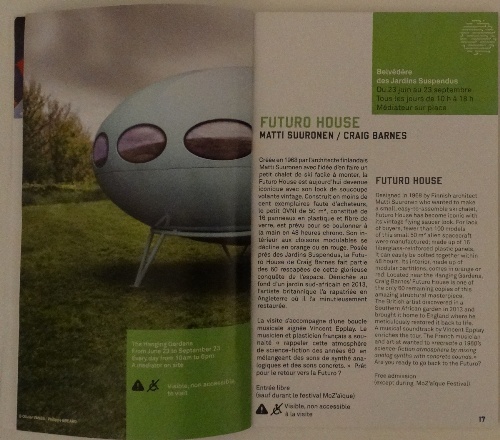 
On 060314 German art auction house Quittenbaum auctioned an original Futuro House Chair/Bed Unit. The unit was Lot #38 in Quittenbaum Auction 115A "Scandinavian Design" and was listed with a guide price of €3,000-4,000. This is the printed catalog for the auction.

We considered putting in a bid on the unit; while we dream of owning our own Futuro realistically we are unlikely to ever be in a position to realize that dream. More realistically we are planning at some point to turn one room in our house into a sort of "Futuro Exhibit" and we figured the Chair/Bed unit would be a cool "center piece." Even at the low end of the estimate we would have been stretching it and in the end we decided not to bid and it turned out the low end of the estimate would not have made it anyway; the unit sold for €4,500. 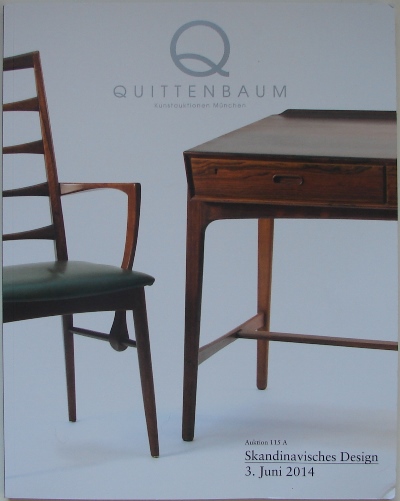 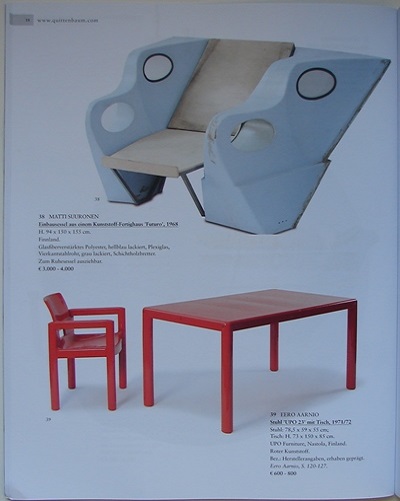 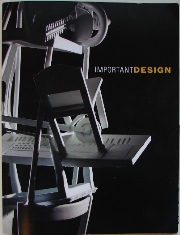 High end Chicago based auction house Wright held an auction titled "Important Design" on 060209. Lot 138 of this auction was a Futuro House. The Futuro House auctioned was located in Bailey, Colorado. The auction was won by Mark Haddawy and the Futuro was moved to its current location in Los Angeles, CA.

This print copy of the catalog for the auction features a short article on the Futuro House and a single photograph (not of the unit actually auctioned). 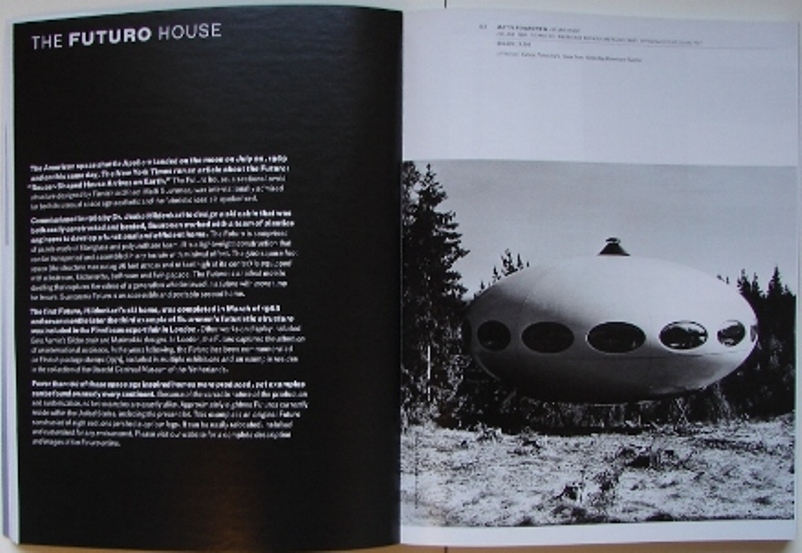 
On 120504 Chicago based auction house Wright held an auction titled "Modernist 20th Century"; Lot 369 of the auction featured an architectural model of the Futuro House and an extensive archive with original tear sheets, photographs, floor plans, articles and a book about the Futuro project. This item is the printed catalog for the auction.

A little more information including links to a personal recollection of the auction from Richard Pisani, owner of the Danvers Futuro, and a couple of photographs of the model can be found here. 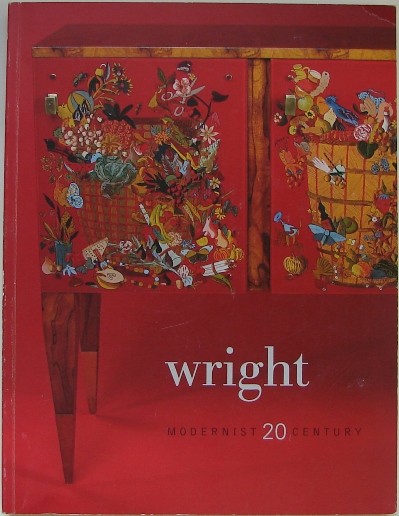 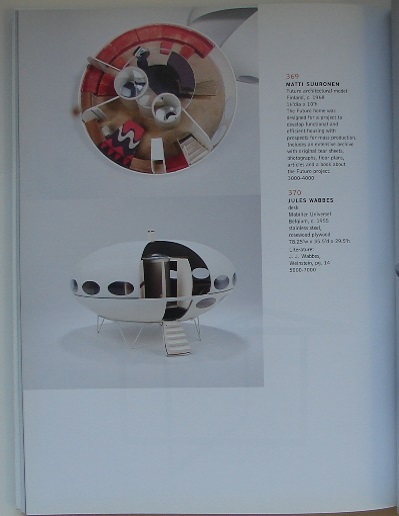 
This guide book, "Espoo Guide: Experience Espoo 2015", includes the WeeGee Exhibition Center, home to the faithfully restored Futuro #001 (originally located in Hirvensalmi) on page 22 in a section titled "Cultural Experiences". There is a single exterior photo of the Futuro. 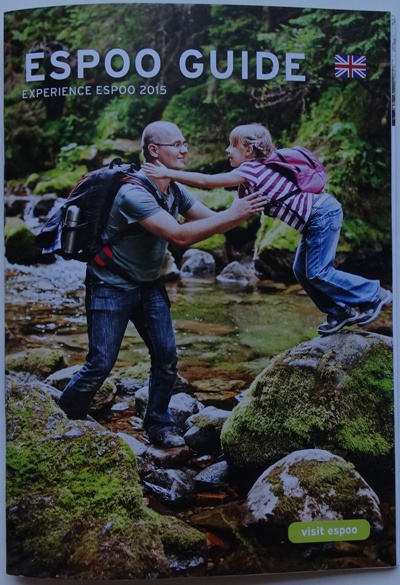 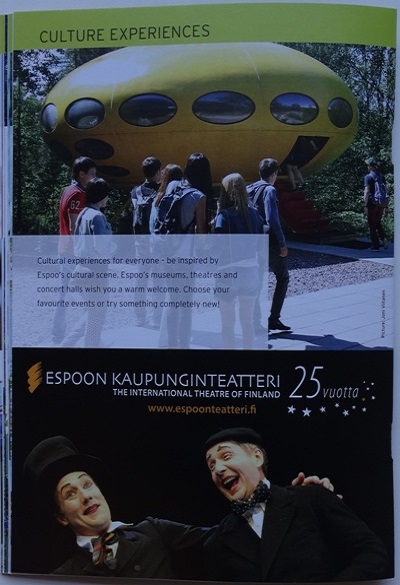 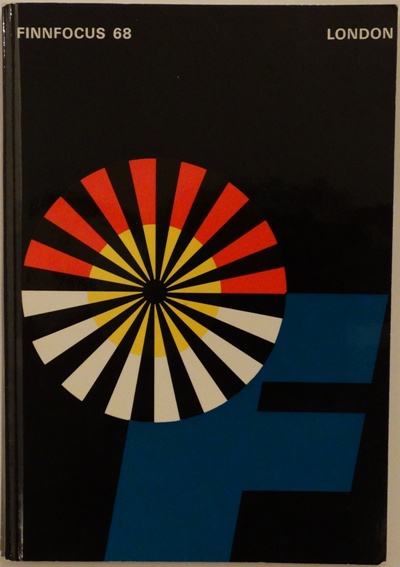 Futuro #002, now located in Matsalu, Estonia, was exhibited as a part of the Finnfocus-Export Fair in 1968 and there became the first Futuro to be exhibited to a "mass audience."

It was only after this exhibition that the Futuro actually got the name Futuro.

The exhibition was held aboard the MS Finnpartner which was moored on the Thames close to Tower Bridge in London for the event. The Futuro was exhibited on an upper deck.

This guide book for the exhibition includes introductions to the exhibition by several Finish and English politicians, deck plans showing where exhibits were located, a list of exhibitors and what they were exhibiting and several pages of ads. There are no photos of the Futuro but it is mentioned on one of the deck plans and in the exhibitor listing for Oy Polykem Ab. 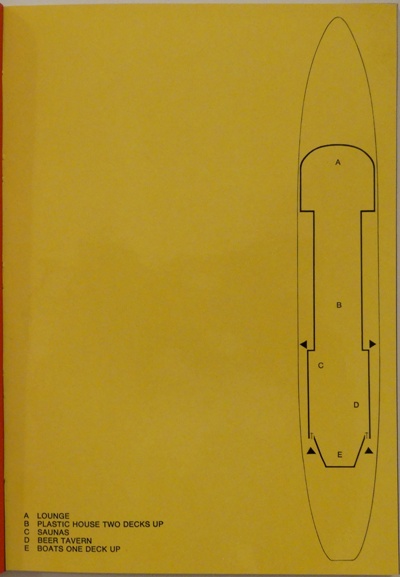 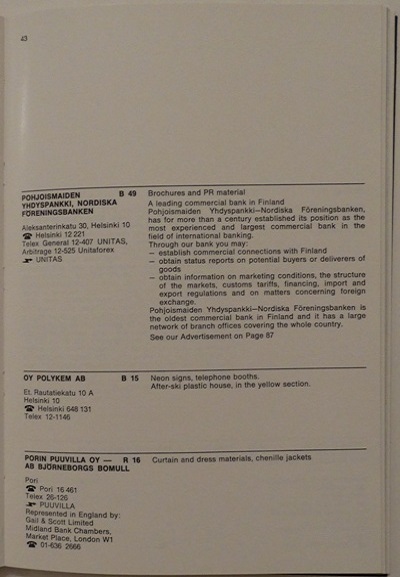 
This is a 2014/15 Guide Book for museums in the Helsinki region with text in several languages. The WeeGee Exhibition Center is listed on page 44 and illustrated with a photo of the Futuro exhibit. We picked this up sometime during our July 2014 trip to Finland though frankly we do not recall where. 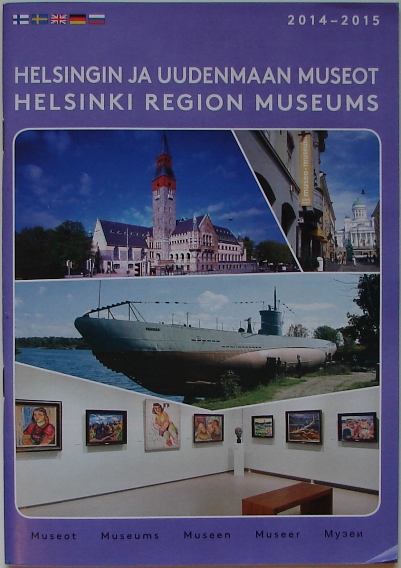 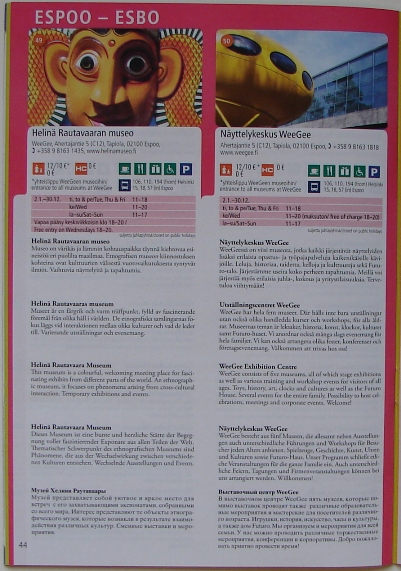 
The Internationale Kunststoffhaus Ausstellung der Welt or IKA opened 080171 on a site just outside the German town of Lüdenscheid. Several different structures were on display at the event including a Futuro House. This Guide Book was sold at the exhibition. More detailed information about this exhibition can be found here.

FOR THE RECORD - This item is no longer held by us but it is interesting nonetheless and so we have left it here. It was actually exchanged with another collector for other Futuro related items. 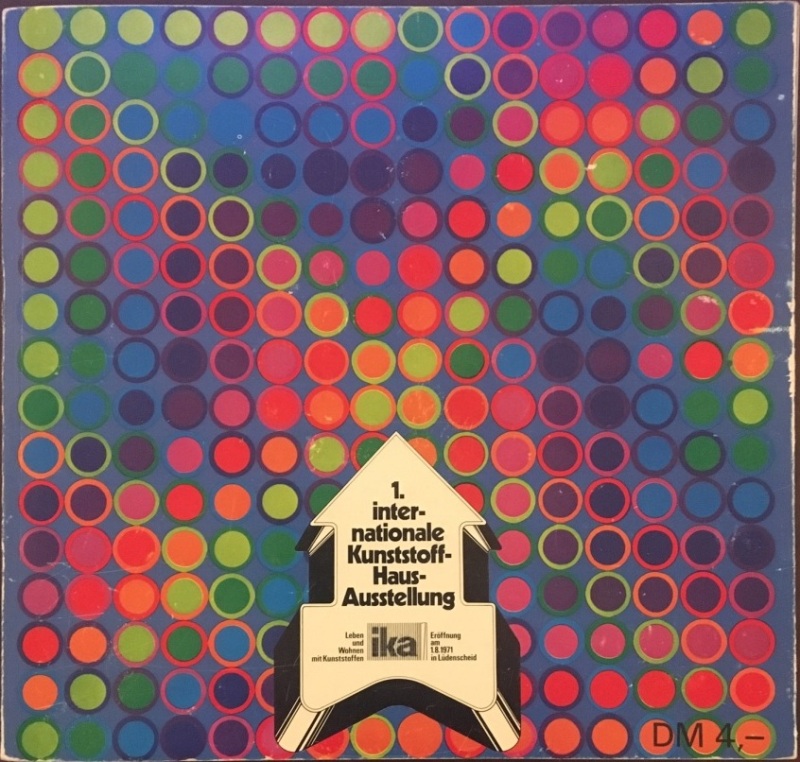 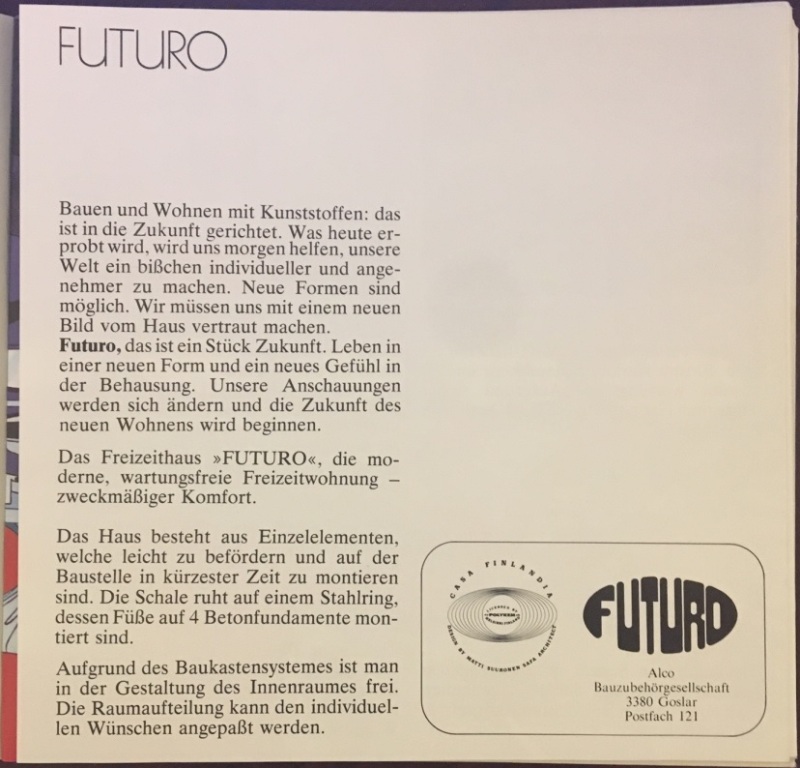 The Futuro currently located in Limni, Corfu previously spent time in Belgium and was one of the entries in Belgian broadcaster VRT's project Monumentenstrijd in 2006 (translates to "Battle Monument" we believe). The project could be described this way: This publication was a "guide" to the 30 finalists and contained information on each of them; the Futuro was #21 and listed on page 18.

Unfortunately the Futuro did not win the competition. 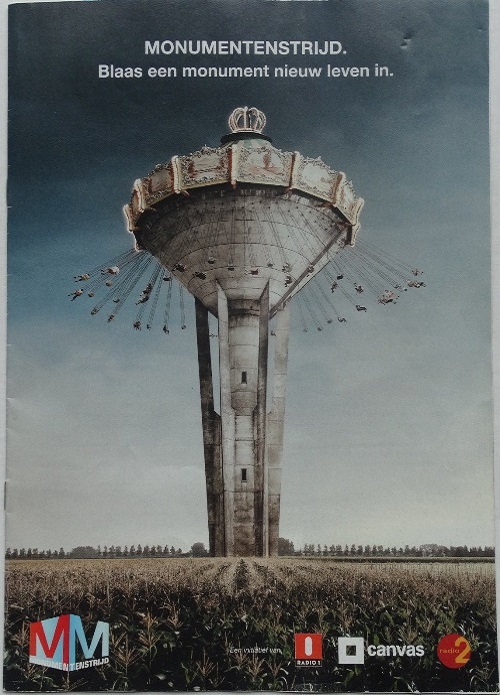 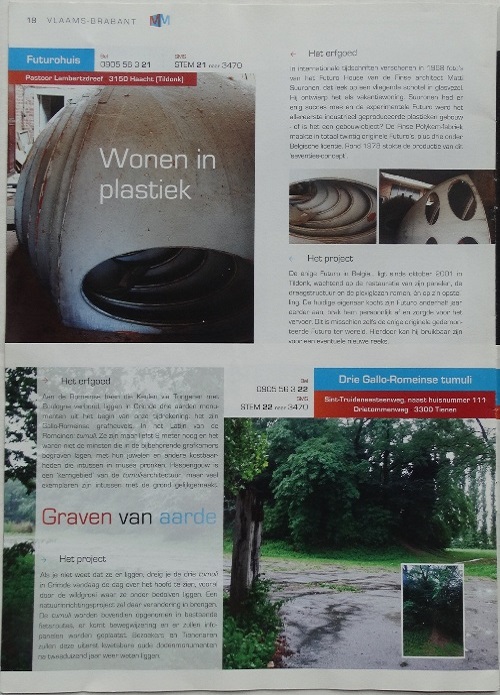 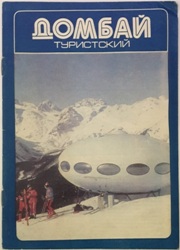 This 14 page tourist booklet features the Dombai Futuro on the cover.

The booklet carries the very simply title "Dombai Tourist" on the cover (according to Google Translate) along with the photo of the local Futuro.

On the inside there are many great photos of the area (it certainly looks like a beautiful area to visit) and commentary that presumably describes the area and its attractions and features. There are no additional photos of the Futuro inside the booklet and we do not know if it is mentioned in the text.