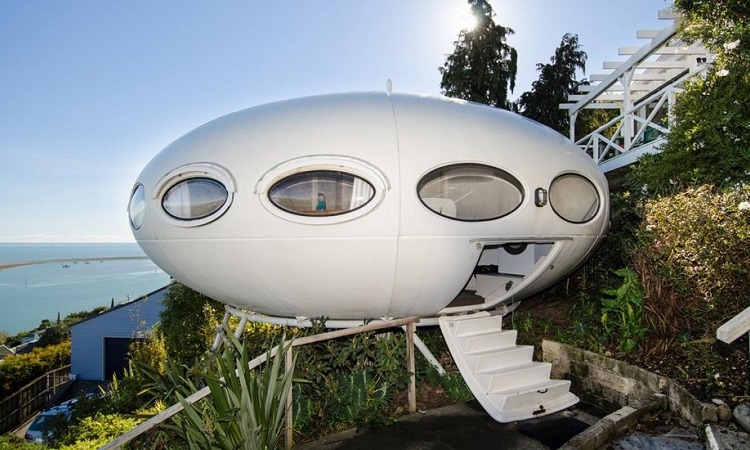 Google Earth satellite imagery dated 122214 clearly shows the Futuro is no longer on site so we are changing the location information for this unit to Richmond (Vicinity Only) for now until better information is available.

A 071714 Nelson Mail article reports that disassembly of the Nelson Futuro started on Monday 071414 and that the unit is expected to be fully disassembled and removed from the site by 071714. The Futuro is being moved to a storage site in Richmond prior to later relocation to Christchurch. The article was accompanied by a couple of photos which can be seen below. 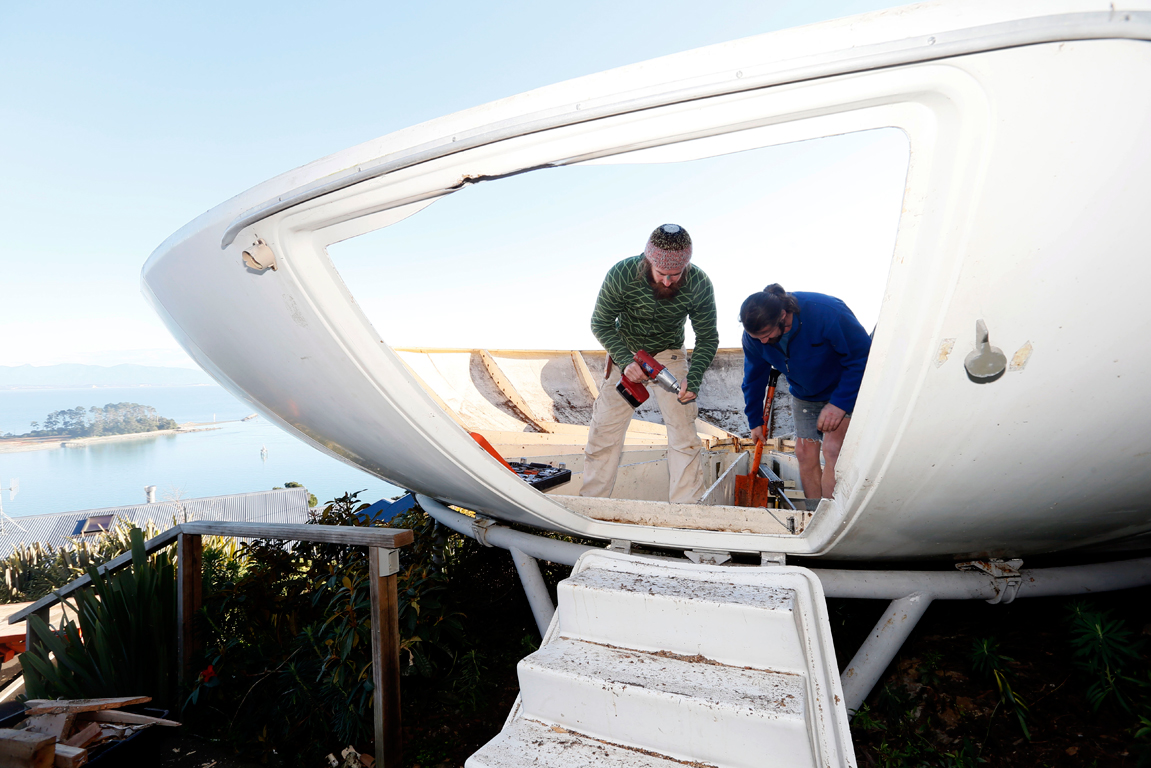 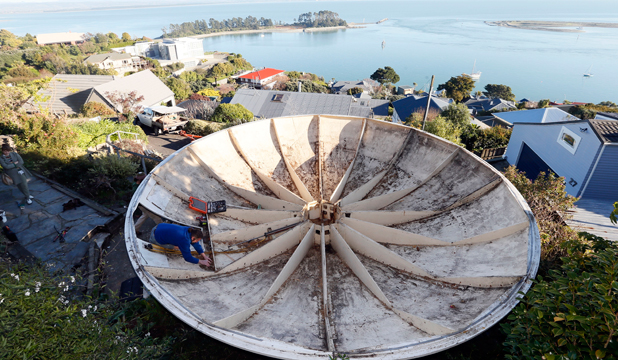 A 052614 Nelson Mail article titled "Sold Spaceship To Take Off On Journey South" confirms that the Nelson Futuro did indeed sell for $75,000.

The article reports agent and auctioneer Jeremy Matthews as saying:

"... the spaceship finally sold to a Christchurch purchaser for $75,000. The winner was among the 10 bidders in the race, and one of five phone bidders ... (there were) five bidders in the room and another five on the phone ... two people were bidding from Christchurch, two from Auckland and another bid while on the road between Christchurch and Dunedin ... bidding started at $49,000 and went up to $75,000 at times in $1000 leaps."

The article does not indicate who purchased the Futuro other than to say that it was someone associated with an "internationally famous New Zealander" who planned to relocate the unit to Christchurch where it would be used for personal accommodation.

The last paragraph of the article reads as follows:

"Matthews said the sale price was fairly typical of other good-quality Futuro homes, although one in Raglan which had been "left to sit" sold recently for $35,000 years after the owner had paid $85,000 for it."

Tim Hoban, who purchased the Raglan Futuro, contacted us today to set the record straight; this part of the Nelson Mail article is not true.

A comment on the blog Cult of Weird this morning indicates the Futuro sold for $75,000. We have not yet seen this on any news sites.

The 052114 auction did not result in a sale; in fact there was a distinct lack of bids. The Futuro alone will now be auctioned 052214. The website stuff.co.nz reports that auctioneer Jerry Matthews said that:

"... between 15 and 20 people were interested in the spaceship pod on its own, including someone who would "make it even more famous." He declined to say who but removal of the pod would free up the site to be sold separately."

Jay, who posted the comment referenced below on the blog Cult of Weird, contacted us a day or two ago about that comment; we clearly had blurred vision when we read it. So to correct; the comment about an asking price of $250K was not in relation to this Futuro but was in fact in relation to the Futuro being stored in Harewood at King's House Removals. Our excuse - AGE. And to those of you who are younger than us (which will, unfortunately, be "a lot") just know that you too will find your faculties declining as your age advances.

The property actually has a rateable value of $610,000 of which $600,000 is the land valuation but, as stuff.co.nz reports that valuation has not discouraged interest; the first open house saw near record numbers of people visiting the property with 20 or so visitors in the first half hour. We find ourselves wondering how many were genuinely interested in a possible bid and how many were grabbing a rare opportunity to see inside a well maintained Futuro. The stuff.co.nz article was accompanied by the photos below from that first open house. 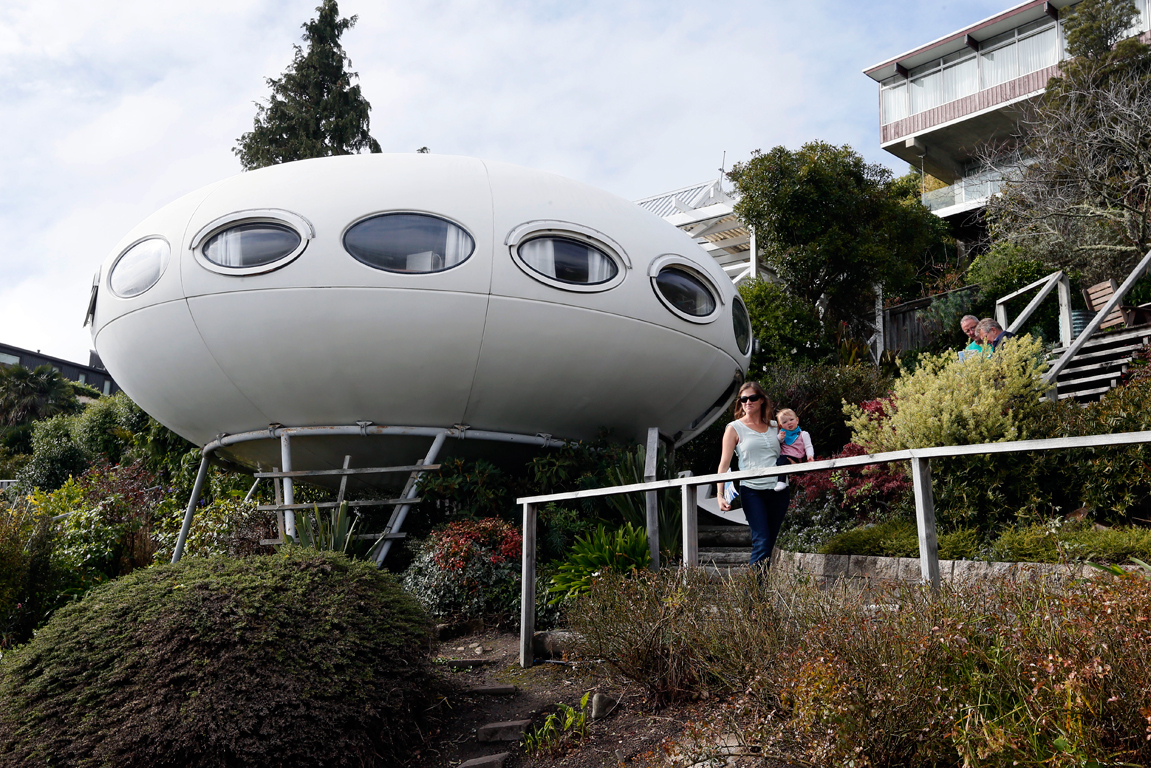 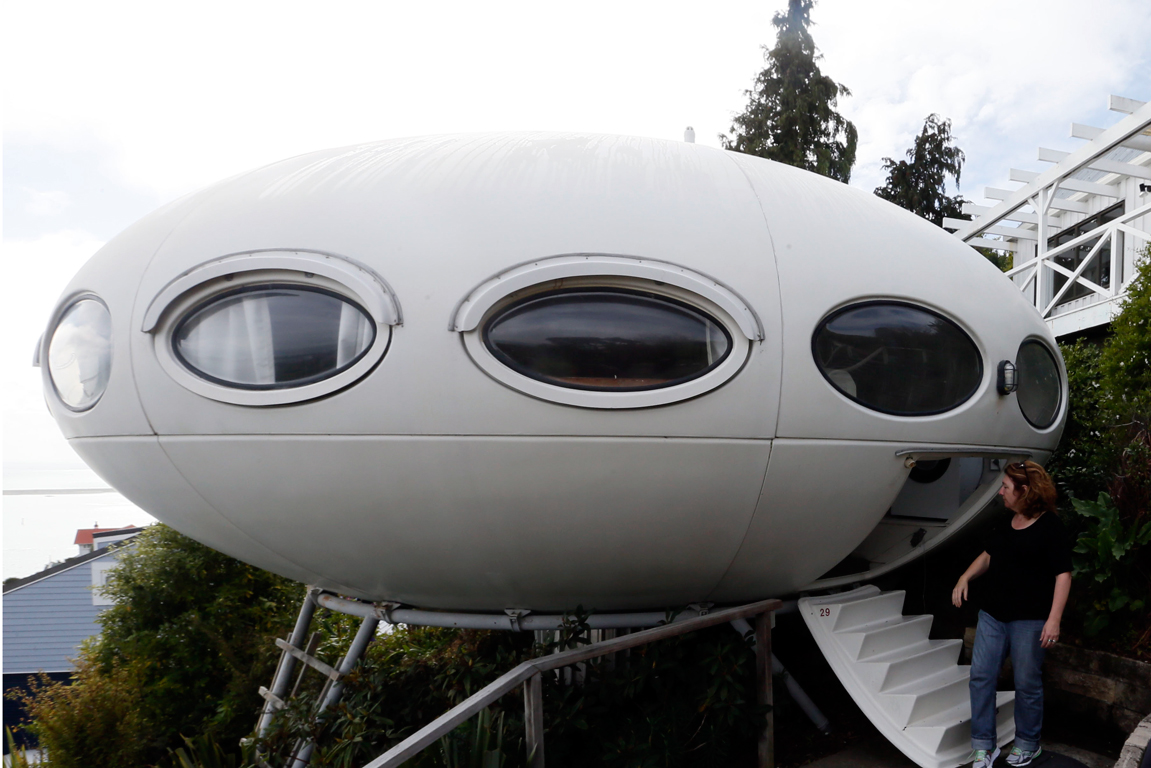 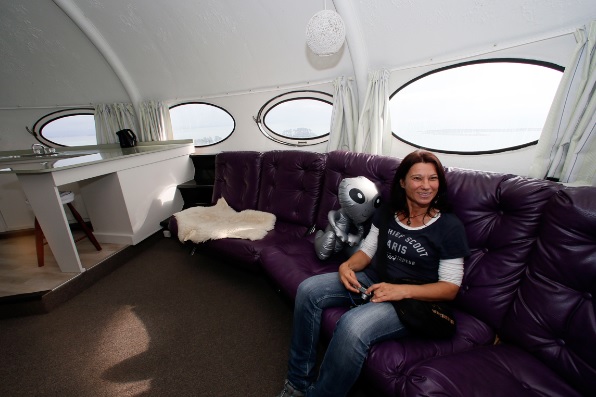 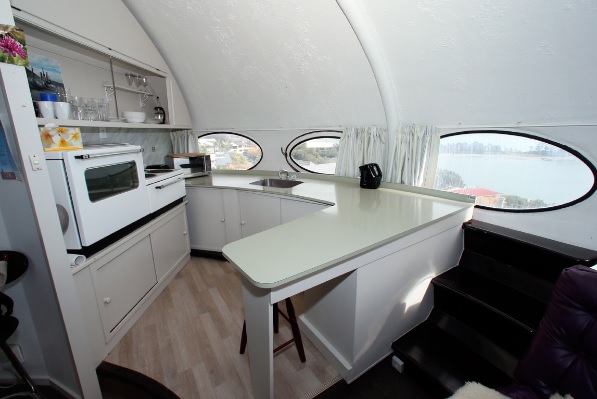 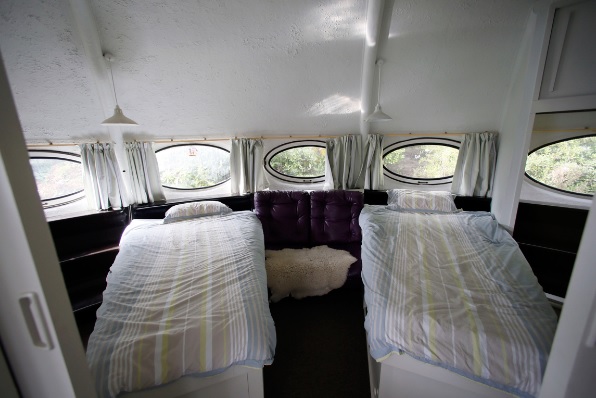 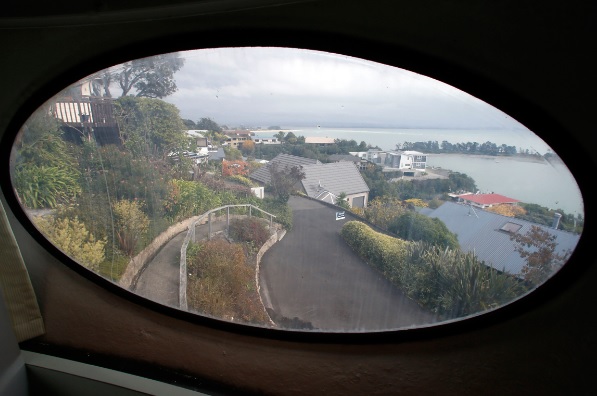 This Futuro along with the accompanying property and land will be sold at auction 052114. The auction listing can be found on the Bayleys Real Estate site (Dead Link - Internet Archive Wayback Machine archived version here); it is accompanied by the great set of photos displayed below. A comment on the blog Cult of Weird suggests the price being sought is around $250K.

We have to say that while we are mostly very content with our life and financial situation (we are by no means wealthy but we are reasonably comfortable) every now and again we see something that makes us think "if only ..." and this is one of those times. Obviously we are Futuro "nuts", these pages are evidence enough of that, so to find a Futuro and, not only that, but a Futuro in great condition that is on a plot of land with a house in such an idyllic location makes us really wish we had considerably more money than we do and that we were in a position to bid in this auction. 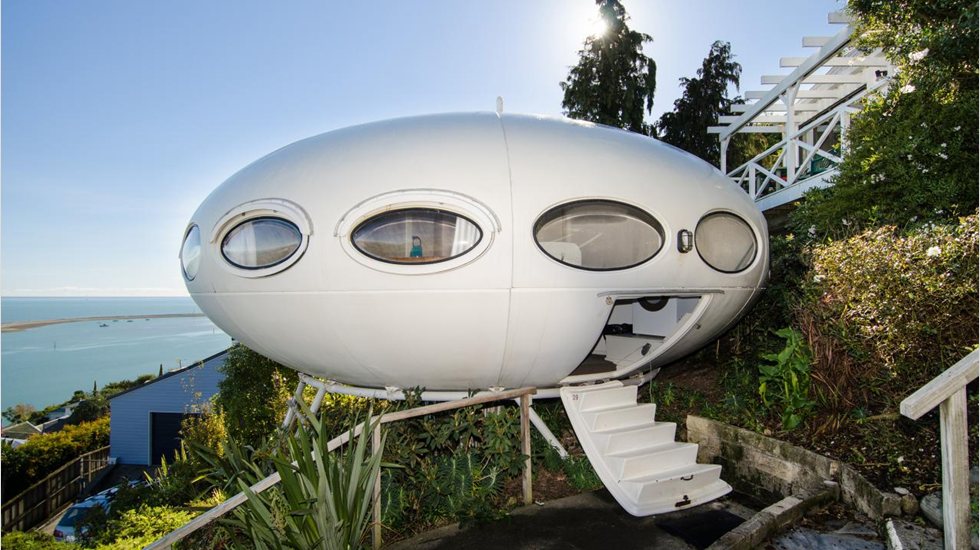 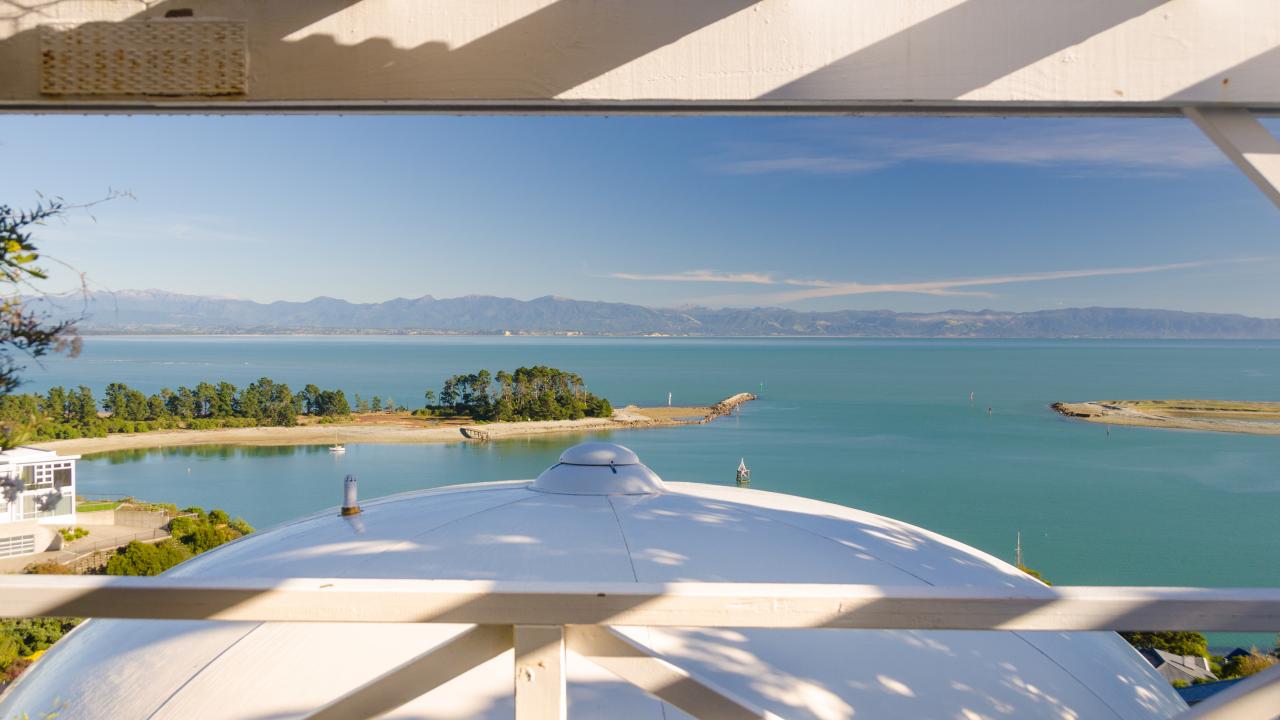 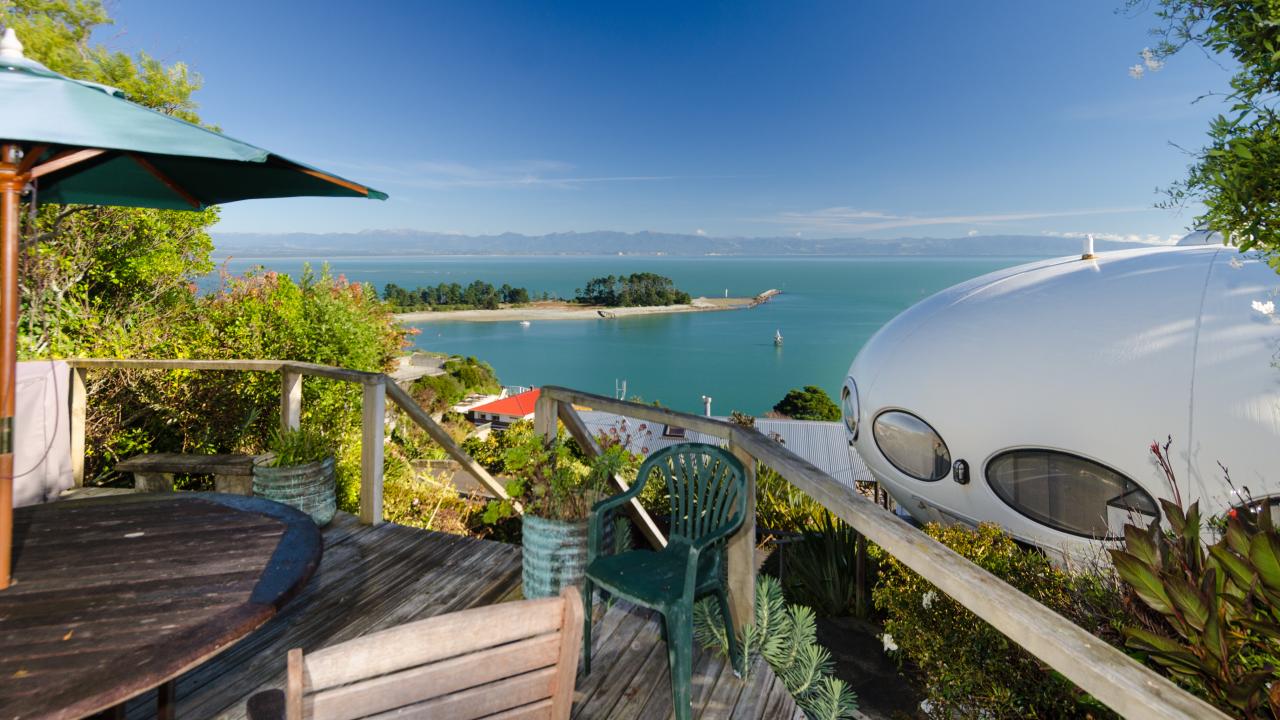 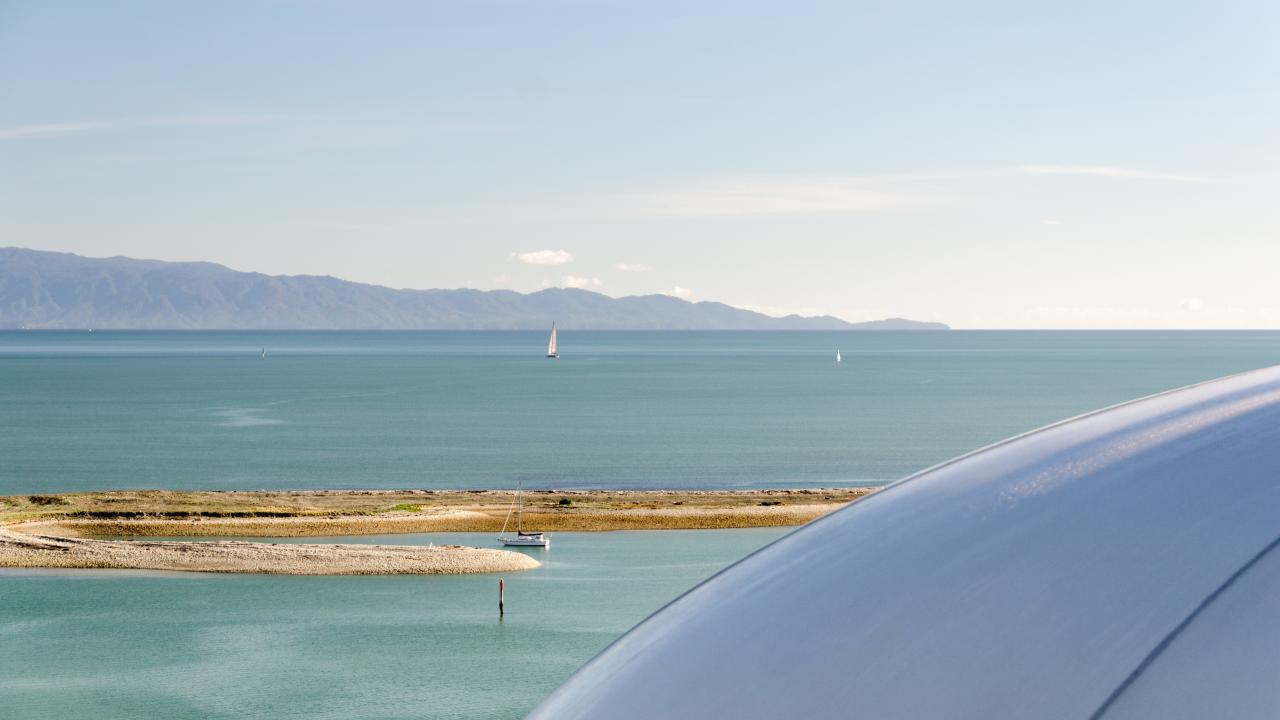 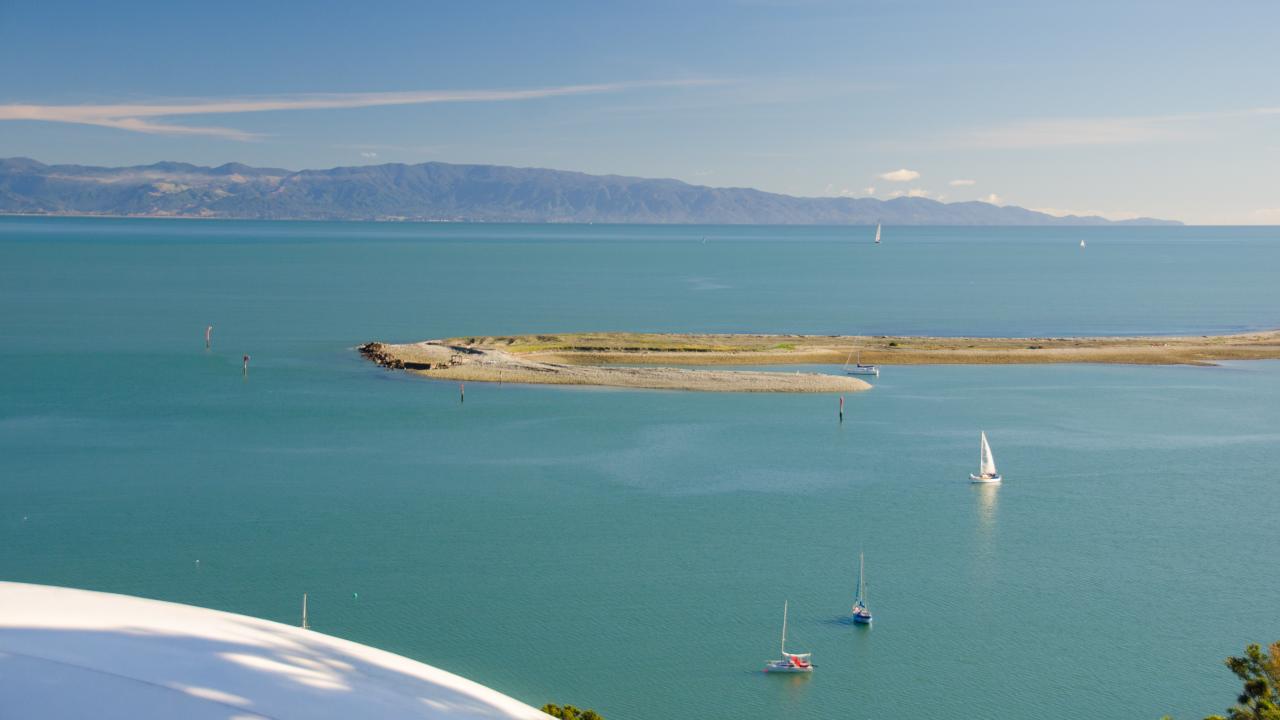 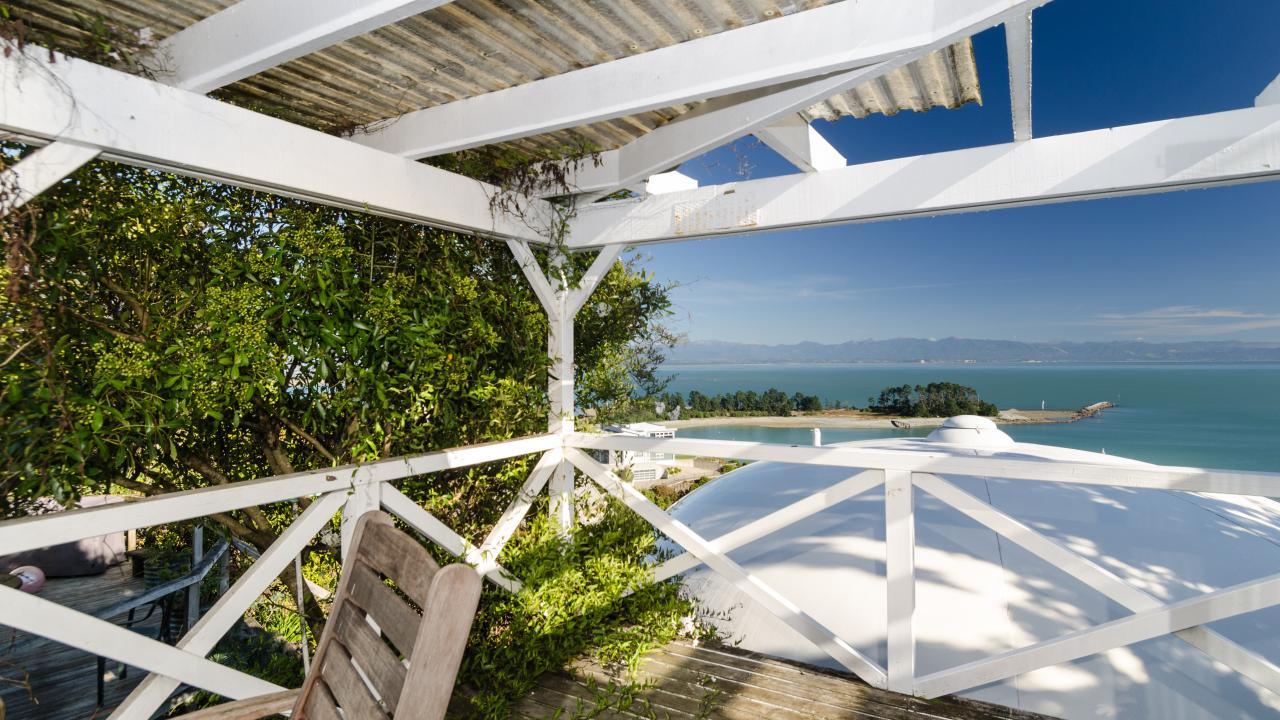 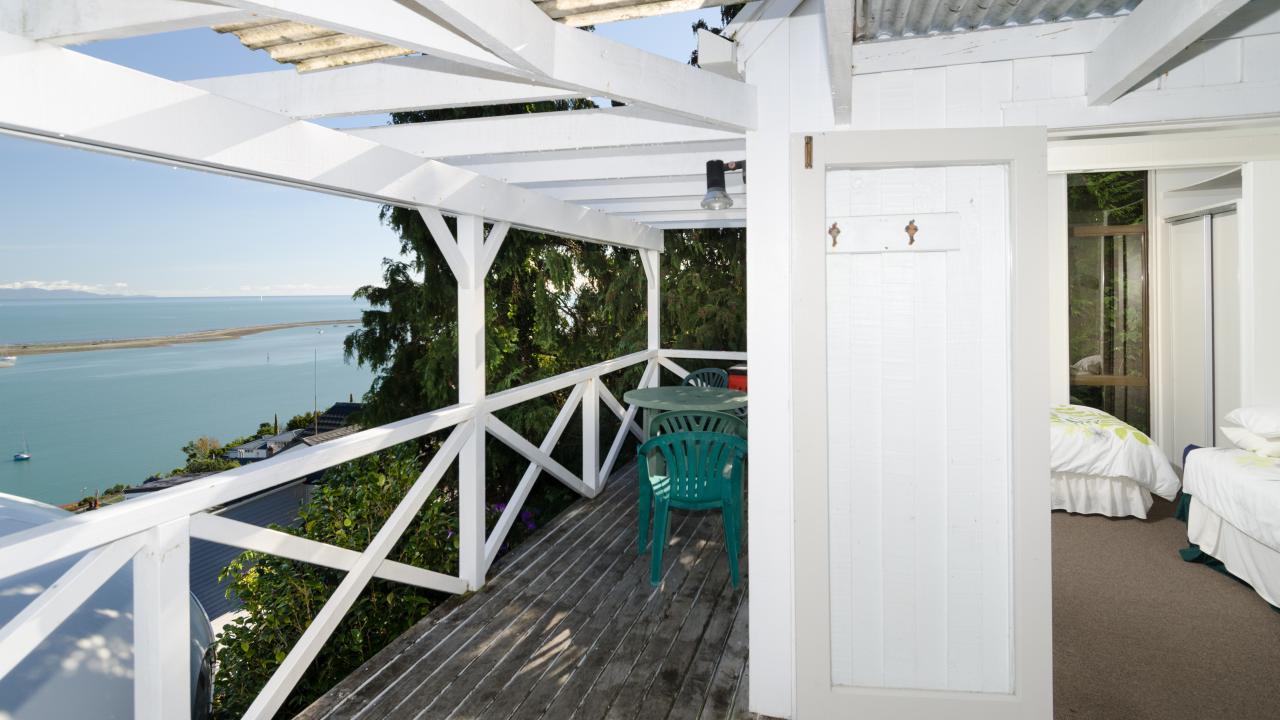 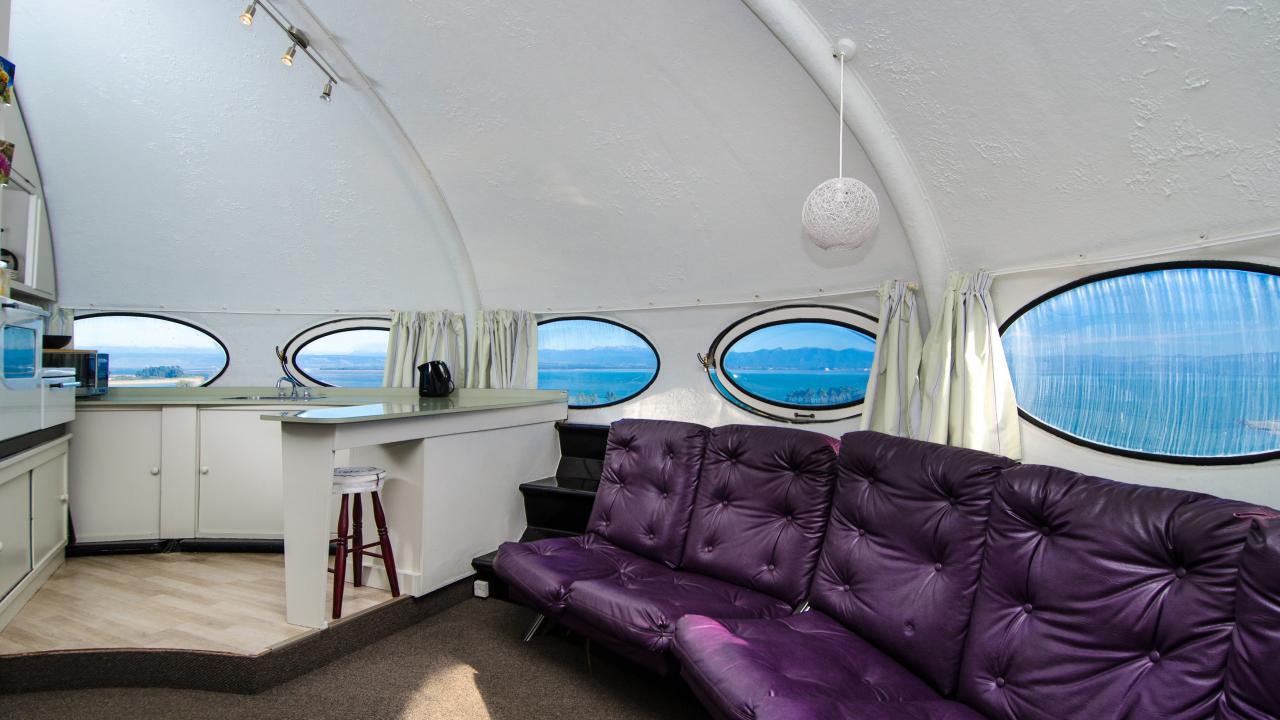 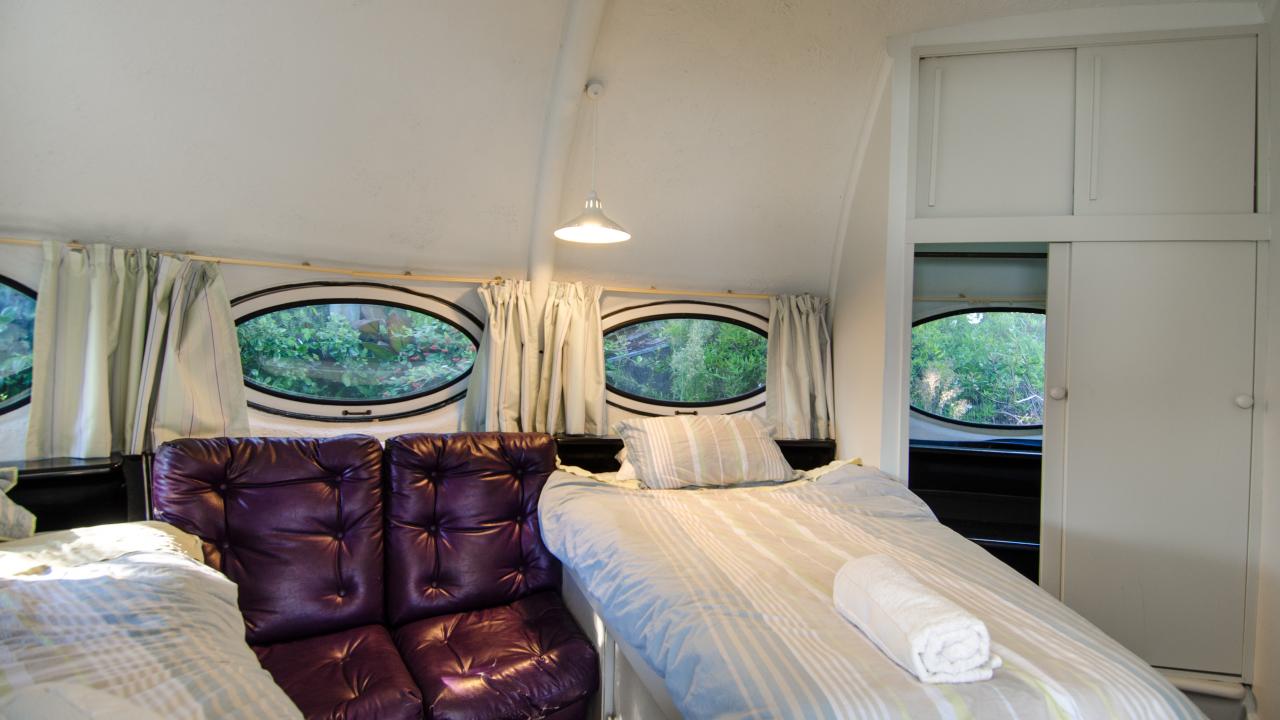 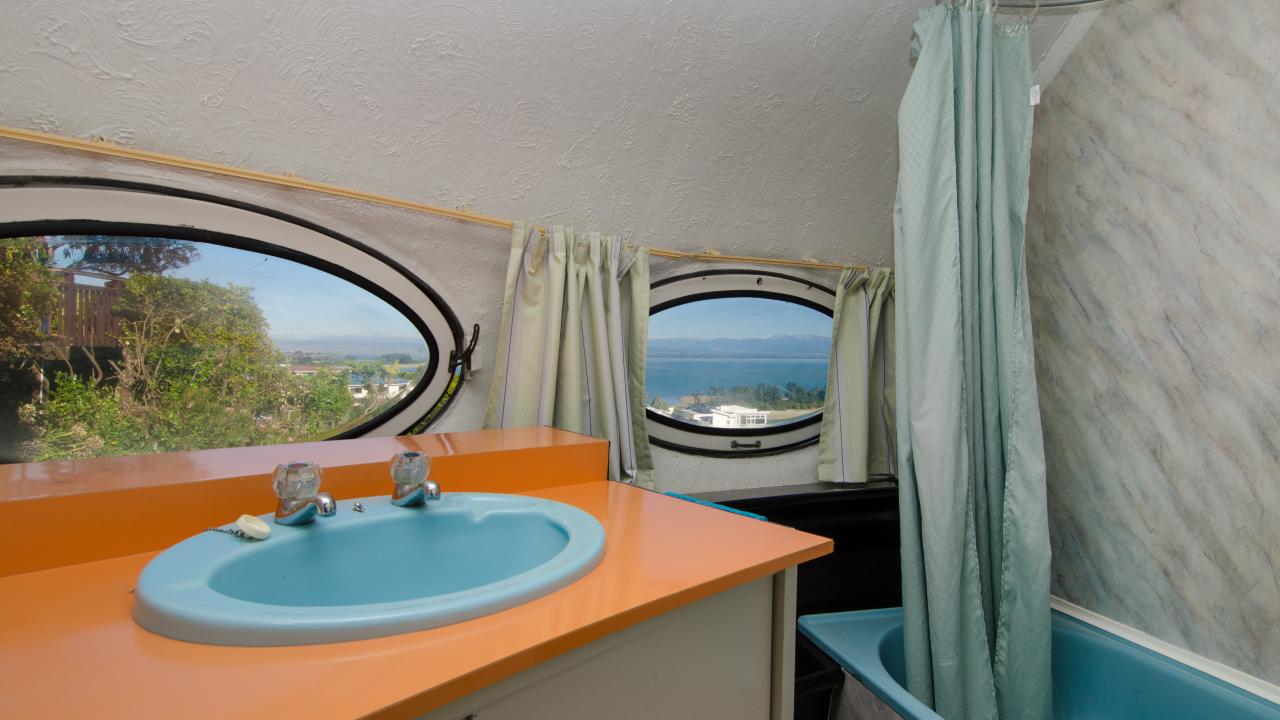 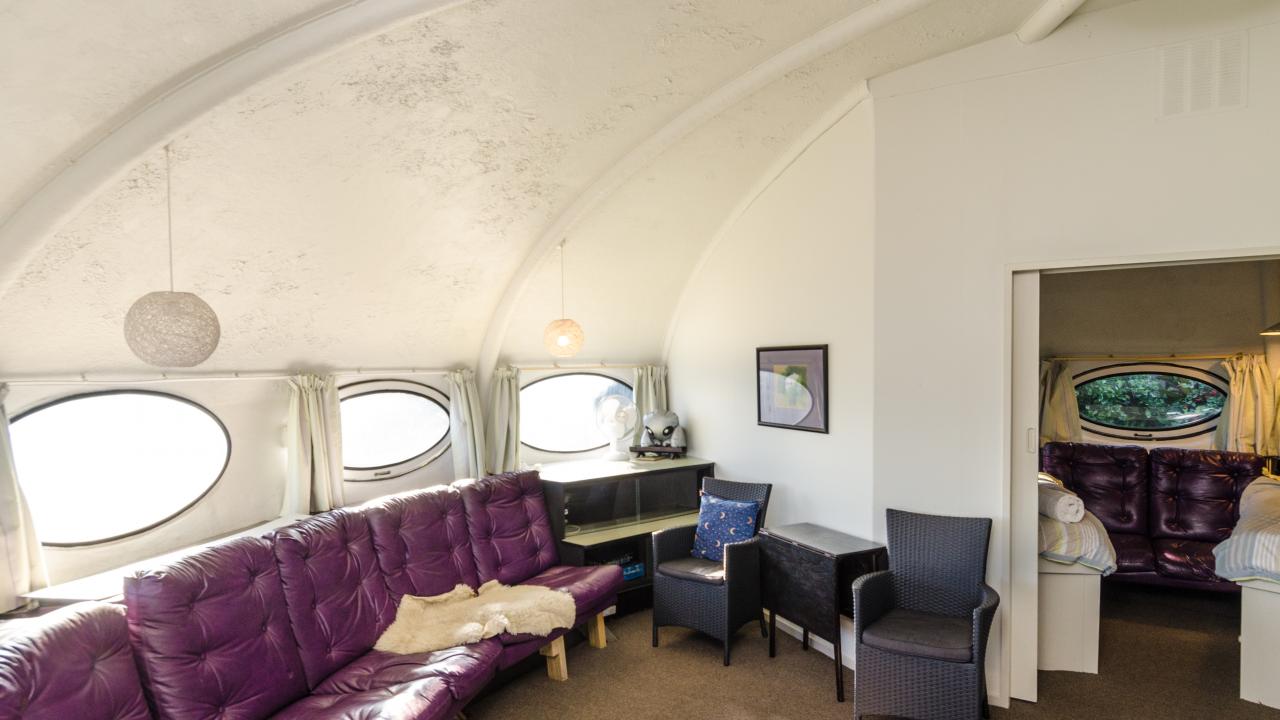 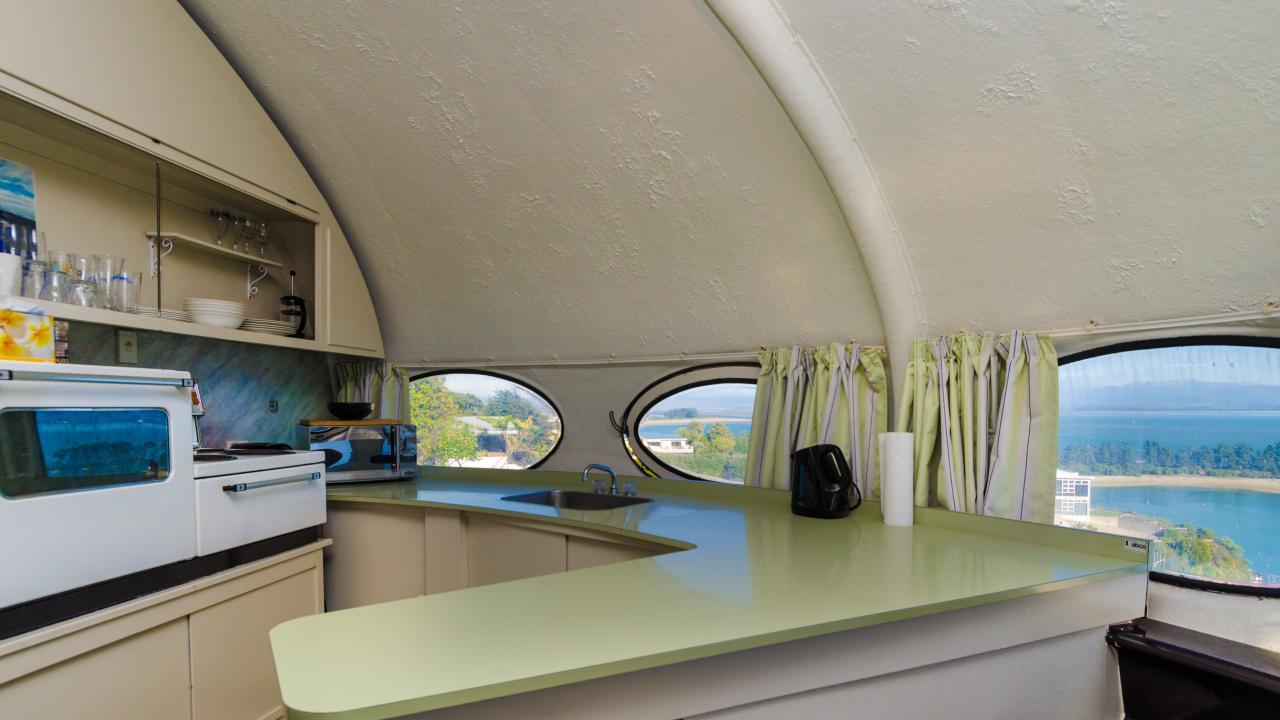 It seems that another Futuro has joined the ranks of those available to rent (along with Woodruff and Warrington). The Nelson Futuro is listed on bookabach.co.nz for rent at $175 NZD per night (towards the bottom of the first page of listings as of 122812). The listing was added October 2012 and appears to be still current. The detailed listing for the Futuro can be found here. The listing is accompanied by these photos. 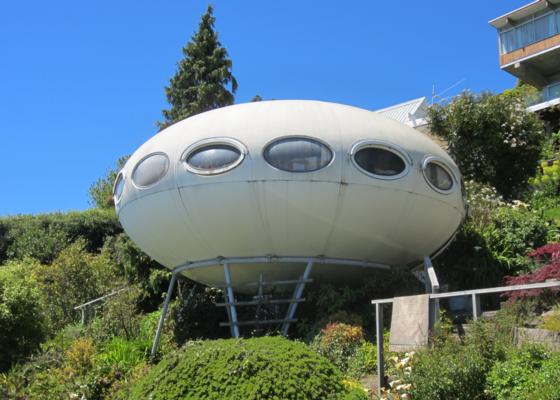 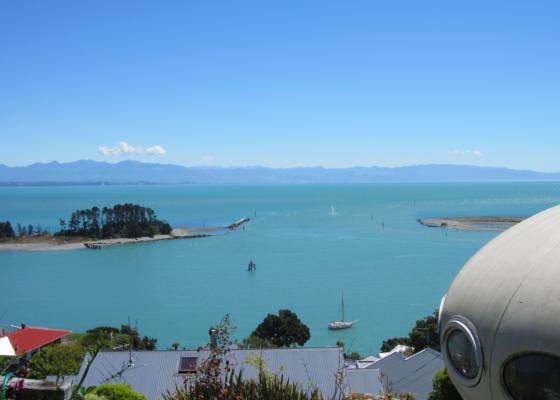 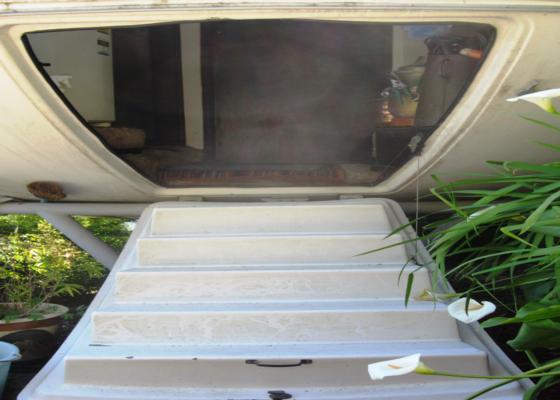 Though obviously not "new", there is no such thing, this is a "newly rediscovered" Futuro (at least as far as we know). We certainly have not seen it listed anywhere on the web. Our thanks go once again to Achim Breiling who seems to be turning into something of a "Futuro Sleuth". Taking an old picture of a Futuro in Nelson and examining the land features in the area he was able to track this down in Google Maps. It is a research technique we have used ourselves in the past but these days it seems all we can do is keep up with Achim's finds; that leaves no time to do any research ourselves!

The photo Achim was working from (below) was old and shows the Futuro at a time when their were far fewer properties around. However despite the difference then till now in the degree of "urbanization" examining the area from the "aerial perspective" clearly shows this is one and the same Futuro; in particular the two pieces of land jutting out into the ocean behind the Futuro are clearly identifiable.

We have absolutely no information about this Futuro. From the "aerial view" in Google Maps though the "object" was the right size it was difficult to be sure it was a Futuro. However the "Street View" (gotta love that) clearly shows a Futuro and, from what you can see, one that is well mainatined and in good condition. Google Earth indicates that the latest aerial imagery is dated 101110 so the Futuro was clearly on site at that time and there is nothing to suggest any subsequent move.

We are not aware of any other photos of this Futuro so if you know of any please let us know. 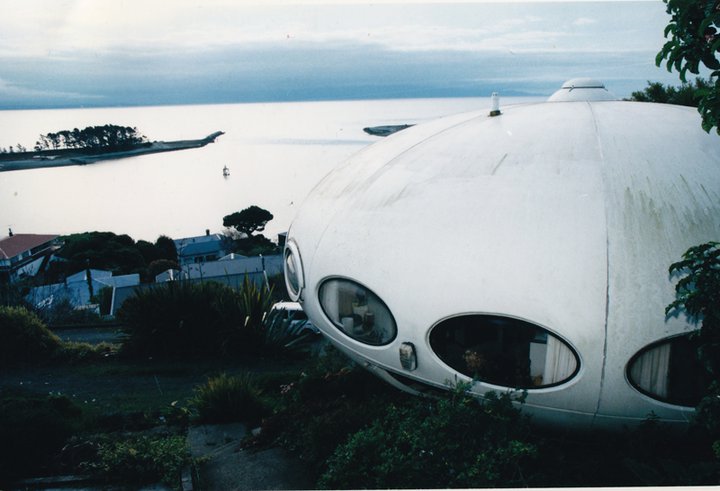