"Googie" = Futuro?
Is The "Googie" A Modified Futuro? So What's The True Story?
Home

Is The "Googie" A Modified Futuro?

The "Googie"; of which there are five known examples (two on Béchervaise Island, two on Macquarie Island located at Waterfall Bay and Brother's Point and one on Hop Island) is often reported as being a "modified Futuro" and indeed for a long time we did the same on these pages but at some point we began to doubt that and started to dig a little deeper into the design and history of the "Googie".

What did we find and is the "Googie" really a "modified Futuro"? The short answer is that we do not believe that it is. Why; read on!

Is A "Googie" The Right Size?

We know that the Futuro House is approximately 8 meters or 25 feet in diameter. Contrast that to a "Googie" which is only around 50% of that with a diameter more like 4+ meters or 13 feet. Check out the screenshots from Google earth below which show one of the two "Googies" on Béchervaise Island, the "Googie" at Waterfall Bay on Macquarie Island and the Futuro in Royse City, TX respectively. Google Earth's measuring tool is by no means an exact tool but it does provide a good approximation of distance and clearly the difference between the "Googies" and the Futuro is significant.

We all have different opinions; our opinion is this - a size difference of this magnitude does not suggest modification, that would be a different window layout, an alternative floor plan or something along those lines but what we have here is a difference such that there is no way the units could have been constructed using anything like the same basic molds and processes used for the Futuro. To us that strongly suggests that while it is possible the design and construction of the "Googie" involved some Futuro inspiration it was definitely not a "modified" Futuro. 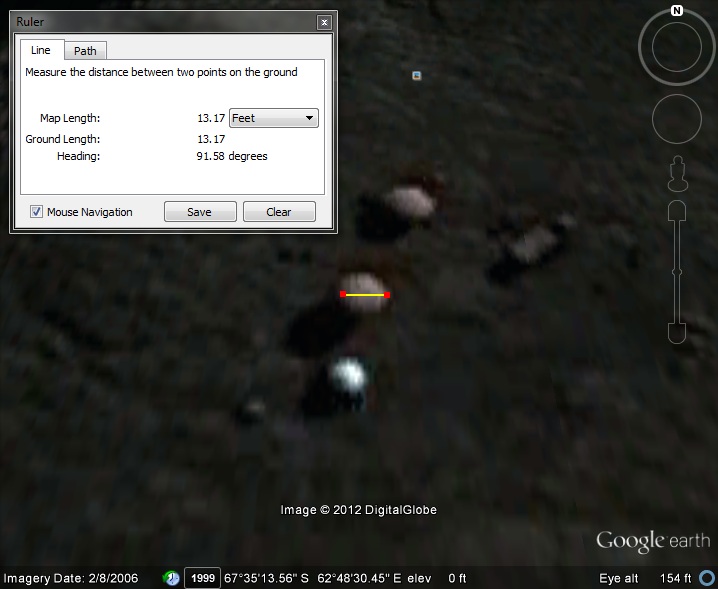 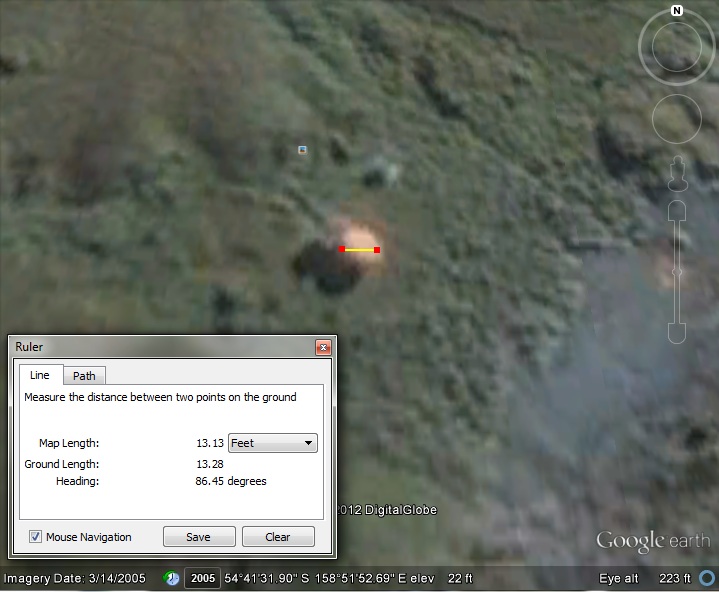 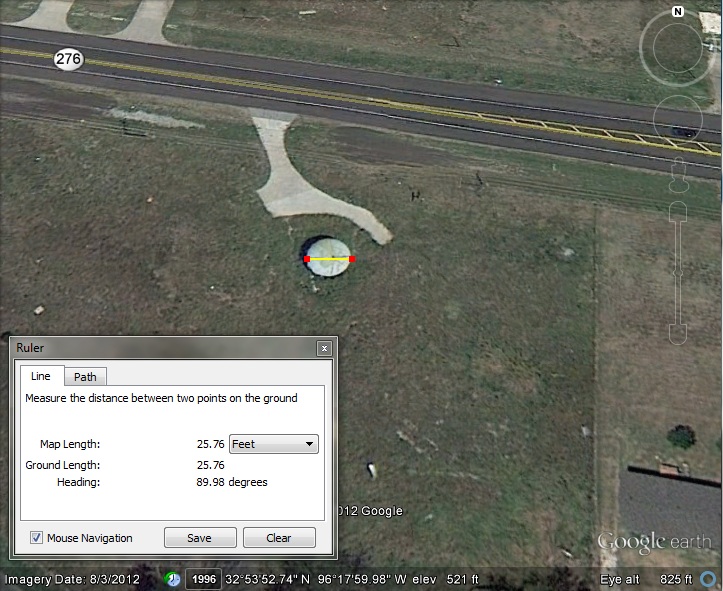 What About The Door?

The doorway installed in a Futuro is often described as resembling the hatch/door to an aircraft and that is quite an accurate analogy. While many larger aircraft have a door and separate steps others have a design exactly like the Futuro where the door and steps are integrated and hinged at the bottom; take a look at the first two photos below - first the Futuro (in this case one of lwsdm's excellent set of photos of Futuro 001 in Espoo) and second a photo from The Gadsden Times illustrating this type of aircraft doorway; the similarity is evident.

Contrast these with the third photo of the Waterfall Bay "Googie" (photo © Australian Antarctic Division, Commonwealth of Australia) which shows a more conventional door and completely separate steps (which are not even a part of the "Googie" let alone "modified"). The difference is clear and again in our mind far too significant to be the result of a "modification" and much more likely to be simply because they are from two different designs. 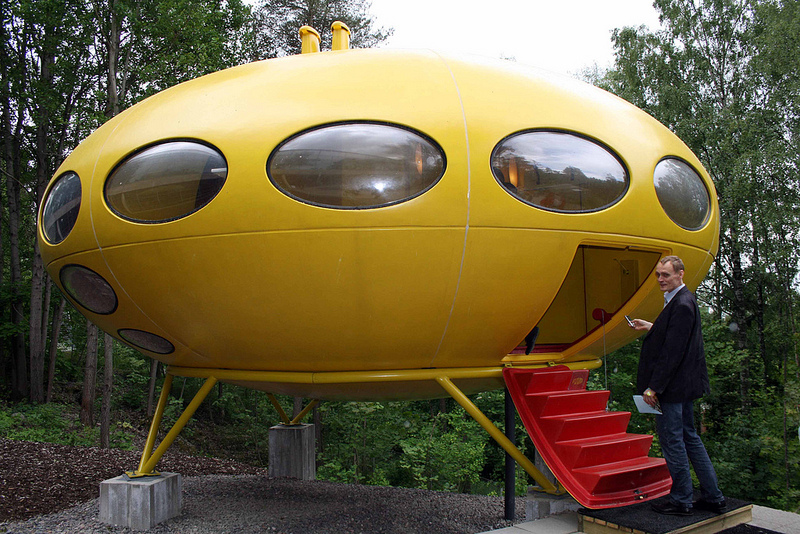 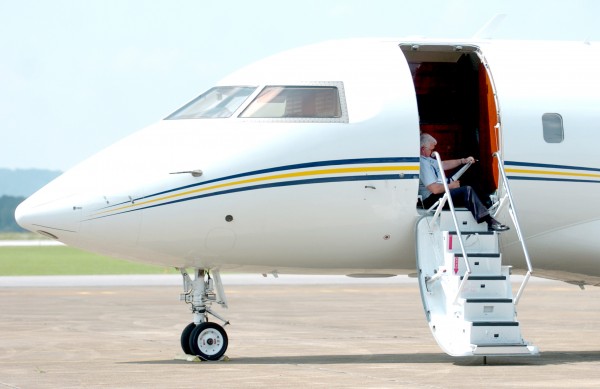 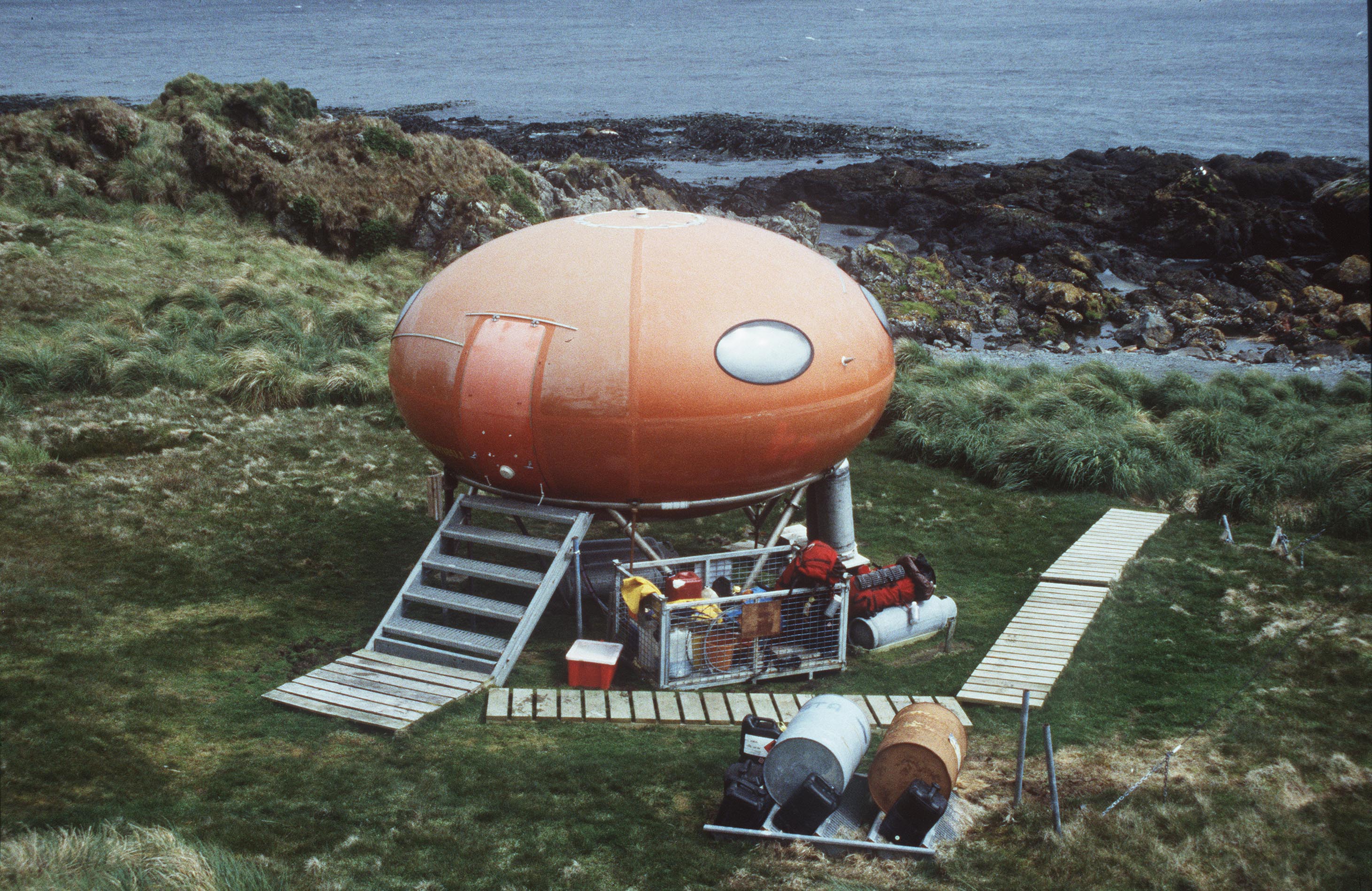 How About The "Eyeball Test"?

For all the science and technology available these days the "Eyeball Test" is still a pretty good tool; take hanging a picture on the wall - just looking at it can often identify even the slightest angle away from horizontal.

So; let's try it here - take a look at the two photos below; the one on the left is of the Waterfall Bay "Googie" (photo © Australian Antarctic Division, Commonwealth of Australia) and the one on the right is Futuro 001 in Espoo (photo by Christophe Brutel). To us they do not look remotely the same; not knowing they were a "Googie" and a Futuro there is no way we would consider one a modified version of the other; they look like completely different designs.

Yes there are similarities between the two, the shape of the windows, the construction from separate panels and such but they are sufficiently different that again our opinion is that while one could have been influenced by the other there is no way one could be considered a modified version of the other. 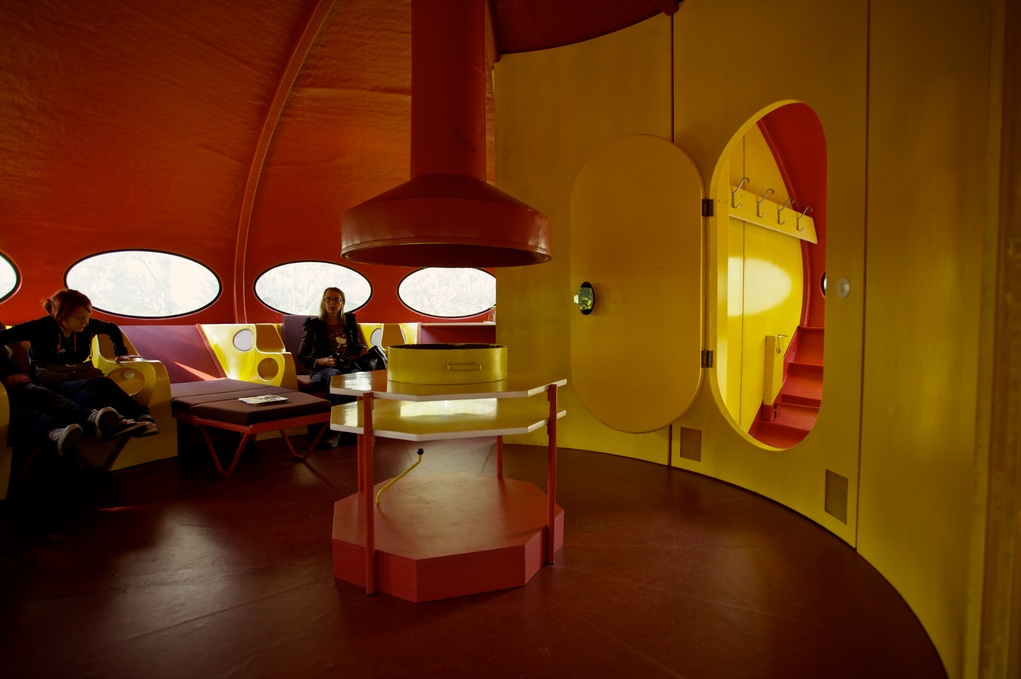 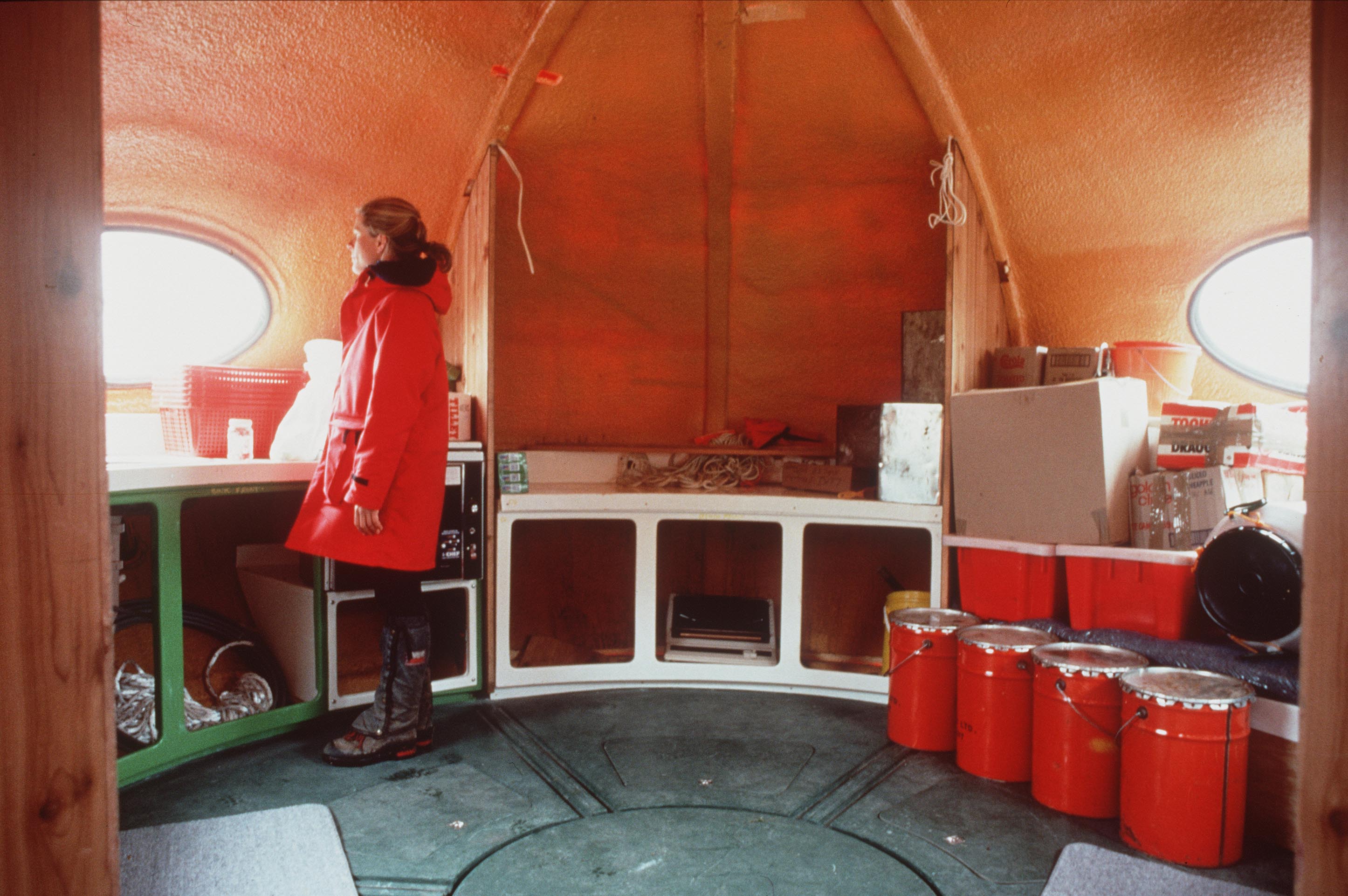 What About The Placement Of The Windows & The Seams Between Panels?

The two photos below illustrate a couple of significant differences between the "Googie" and the Futuro; the one on the left is another one of Futuro #001 in Espoo by lwsdm and the one on the right is of the "Googie" at Waterfall Bay (photo © Australian Antarctic Division, Commonwealth of Australia). Two things should be noted: Once again in our opinion these differences are so significant as to preclude the idea that a "Googie" is a modified Futuro; the former may have well have been inspired in some ways by the latter but that is all, they are two "different beasts". 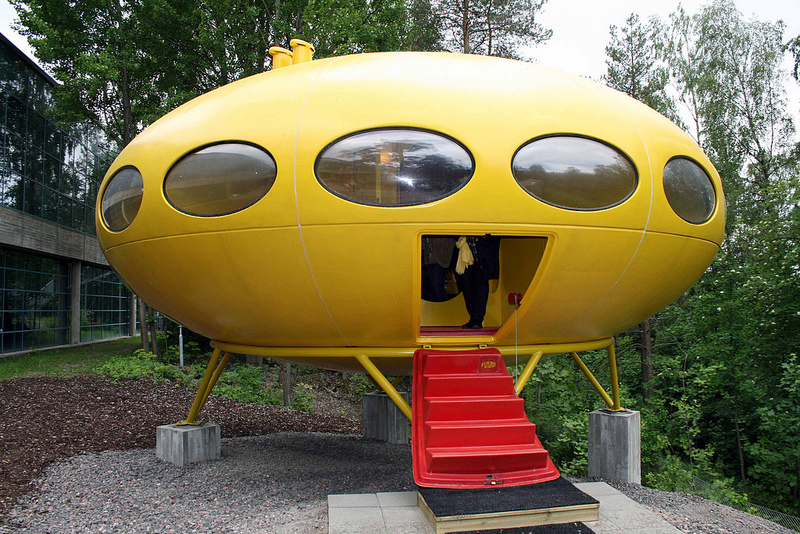 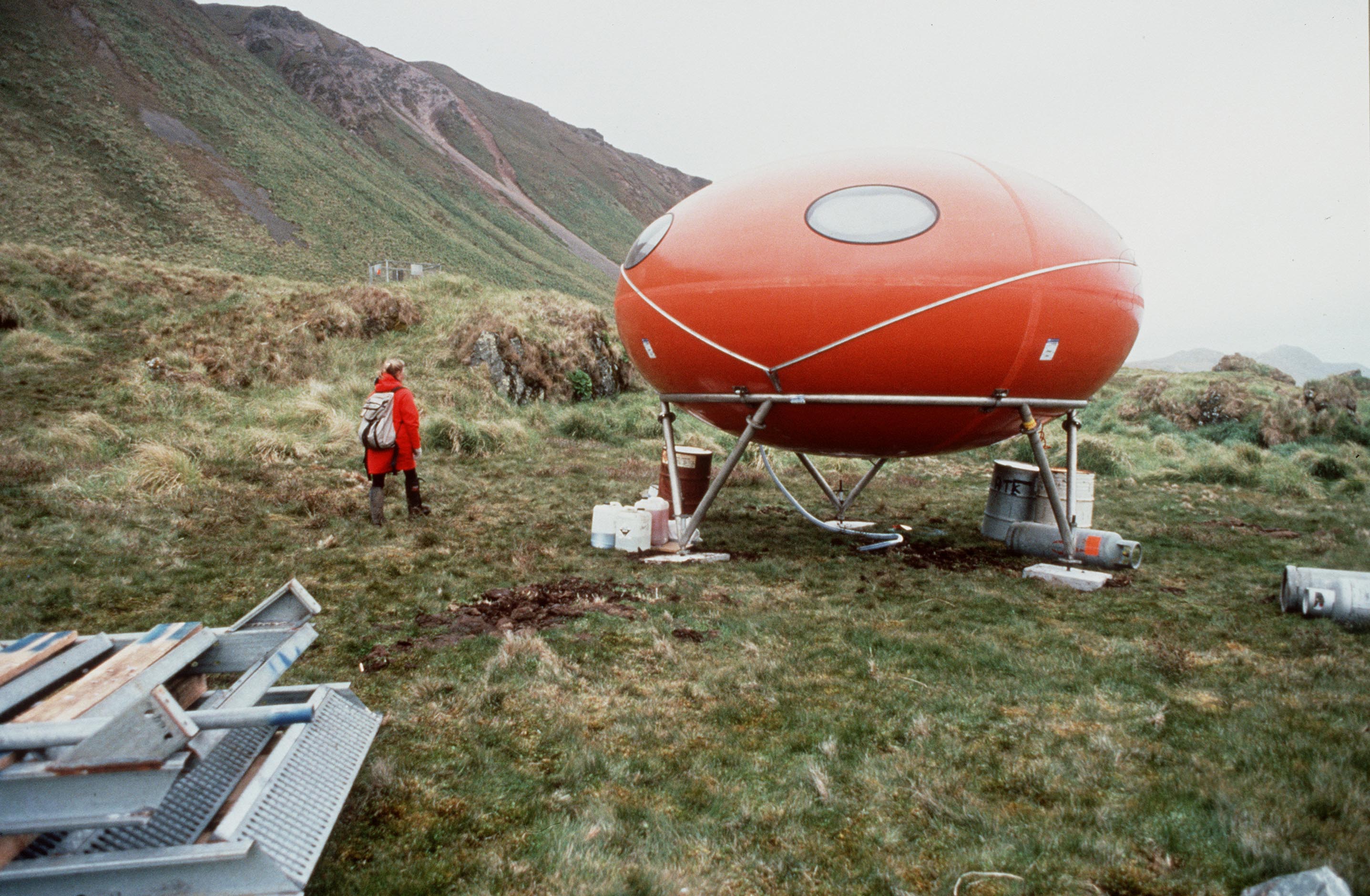 When Were They Manufactured?

So What Should We Conclude?

So What's The True Story?

So, if a "Googie" is not a modified Futuro what is it's story? There is not a whole lot of information on the web but since all the current "Googies" serve as Field Huts for the Australian Antarctic Division that seemed like a good place to start so we contacted them. To be honest we did not hold out a whole lot of hope of even getting a response, Government departments are not exactly known for being the most helpful entities, but in this case we were proven completely wrong; several different employees of the AAD (Jessica, Jonathan, Jan and Graeme - thank you all) provided us with information, references and photos.

The first clue was a note attached to a photograph in the AAD archives which read:

"Similar unit was designed by Division engineer Attila Varna in the 1970's and produced originally at his own expense, as he was unable to get division support. Known by some as a Smartie, they were eventually employed on a number of ANARE expeditions, notably Spit Bay at Heard Island"

This note suggests that while the "similarity" to the Futuro (not mentioned by name but clearly referenced as "Designed for house, early 1970's" previously in the note) was evident and known the "Googie" was in fact an independently designed unit. The design was the work of Attila Vrana, an AAD engineer. It is interesting to note that the design was in fact initially unsupported by the AAD and that Vrana actually developed it at his own expense.

During the course of our email conversations with the AAD wev were referred to several books and other documents. One of them was The Silence Calling: Australians in Antarctica 1947-97 by Tim Bowden which contains a section (pages 426-430) on an expedition to Spit Bay, Heard Island in 1992. That section also provides some historical background on the "Googie".

Original plans for this expedition, a scientific study of seal and penguin populations on the island, included the use of four "Apple" huts and a "Melon" hut (an extended "Apple") as accommodations for team members during a year long expedition. The plans even proceeded as far as purchasing and packing the equipment before a new assessment concluded that the planned accommodations were not adequate. At this point Attila Vrana became involved and the proposal was altered to include testing of a new field hut designed for extreme conditions; an "elliptical module supported above the ground by a tubular steel structure" - the "Googie".

Ultimately the proposal to test the new "Googie" expanded to include four "Googies" and they were transported to Heard Island on the ship Icebird.

The ship stopped briefly on 022291 at Atlas Cove on Heard Island before moving on to Spit Bay where the "Googies" were moved ashore in an assembled state by Squirrel helicopter. We have not researched it but a quick look at the photo above left (from page 427 of our copy of The Silence Calling: Australians in Antarctica 1947-97 - photo is annotated "A Squirrel Helicopter about to lift a portable Googie Hut off Icebird, Heard Island, 1992. (K Green)") tells us that here is another important difference between the "Googie" and the Futuro - weight - in our opinion there is no way that a light helicopter like the Squirrel could transport a Futuro (according to xd-motion.com the external load limit for the Squirrel was 3086 lbs - less than half the weight of a Futuro).

"They felt more secure than the Apples, and made working in the labs and living more comfortable. This was particularly true when you were trying to use the computers. At least they stayed dry!""

The "Googies" spent approximately a year on Heard Island before the expedition came to an end and the Icebird returned to Spit Bay. Over the course of several days starting 031092 virtually all trace of the "Googies" and the expedition were removed from the island. The Icebird returned the "Googies" to Australia following the Heard Island expedition and email correspondence with the AAD along with other references confirm that they were subsequently relocated to their current homes on Béchervaise Island, Hop Island and at Waterfall Bay and Brothers Point on Macquarie Island.

Clearly this is not the complete picture since there were only four "Googies" on Heard and there are five currently in use. In another book we were referred to by the AAD, "Subantarctic Wilderness: Macquarie Island" (Alex Terauds & Fiona Stewart, publ, Jacana Books and Allen & Unwin, 2008) we read on page 60 that two of the "Googies" that were removed from Heard Island were flown into Macquarie island to Waterfall Bay and Brother's Point in the summer of 1995/96. Though we do not know this for a fact given the extreme locations and the difficulty of transport we think it highly unlikely that there was a "interim" location. Most likely after leaving Heard they were returned to Australia, refurbished and repaired as necessary and then relocated to their current sites.

That accounts for two of the four "Googies" from Heard; the AAD confirmed that a third went to Hop Island. That leaves us to conclude that one of the two on Béchervaise Island came from Heard. The origin of the other is not known to us at this time. Perhaps there was a fifth "development" unit that never went to Heard or perhaps a fifth was constructed later; if and when we find out more we will of course update this page with that information.

The photos below show the four "Googies" on Heard and at their subsequent current locations (left to right, top to bottom); 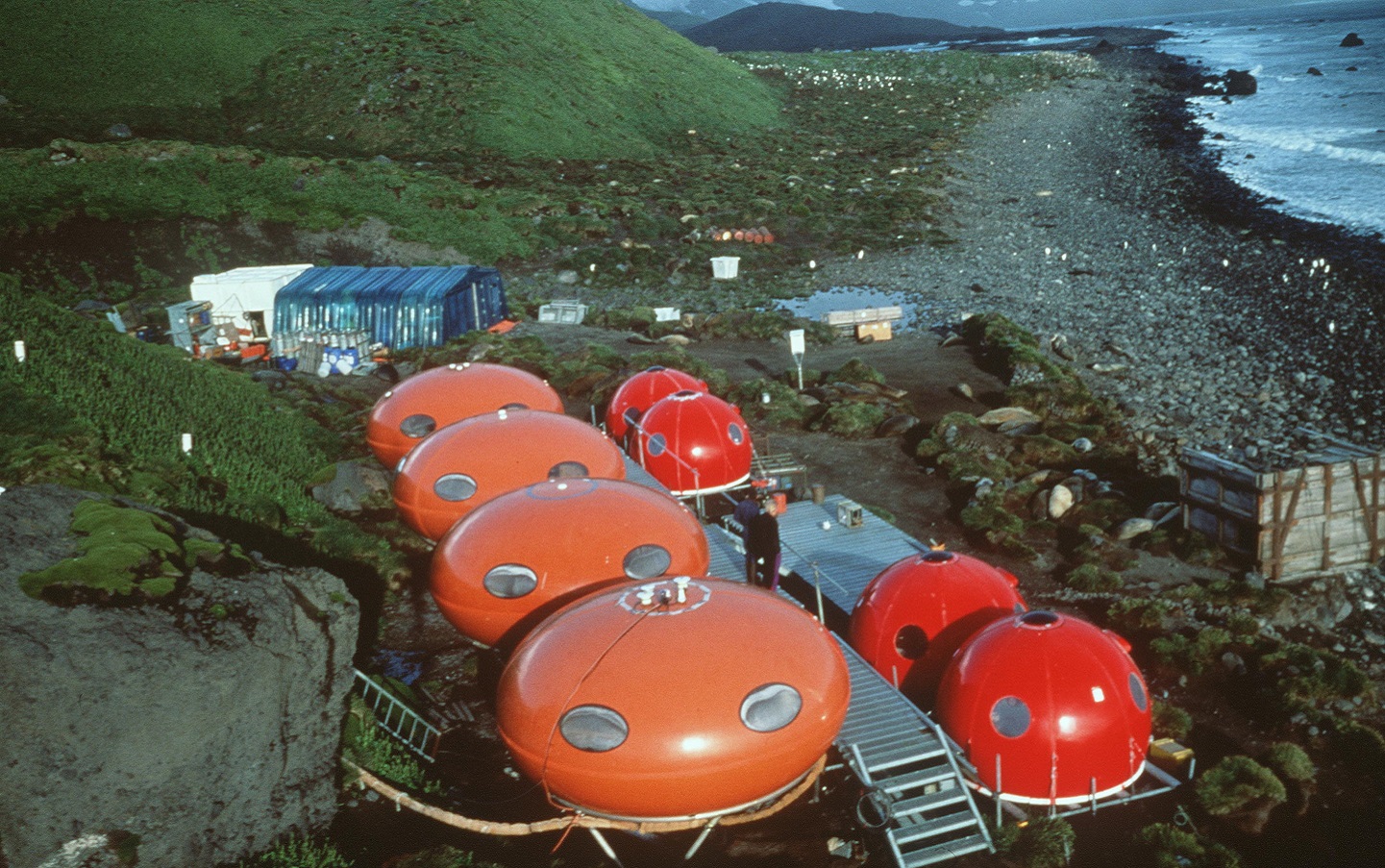 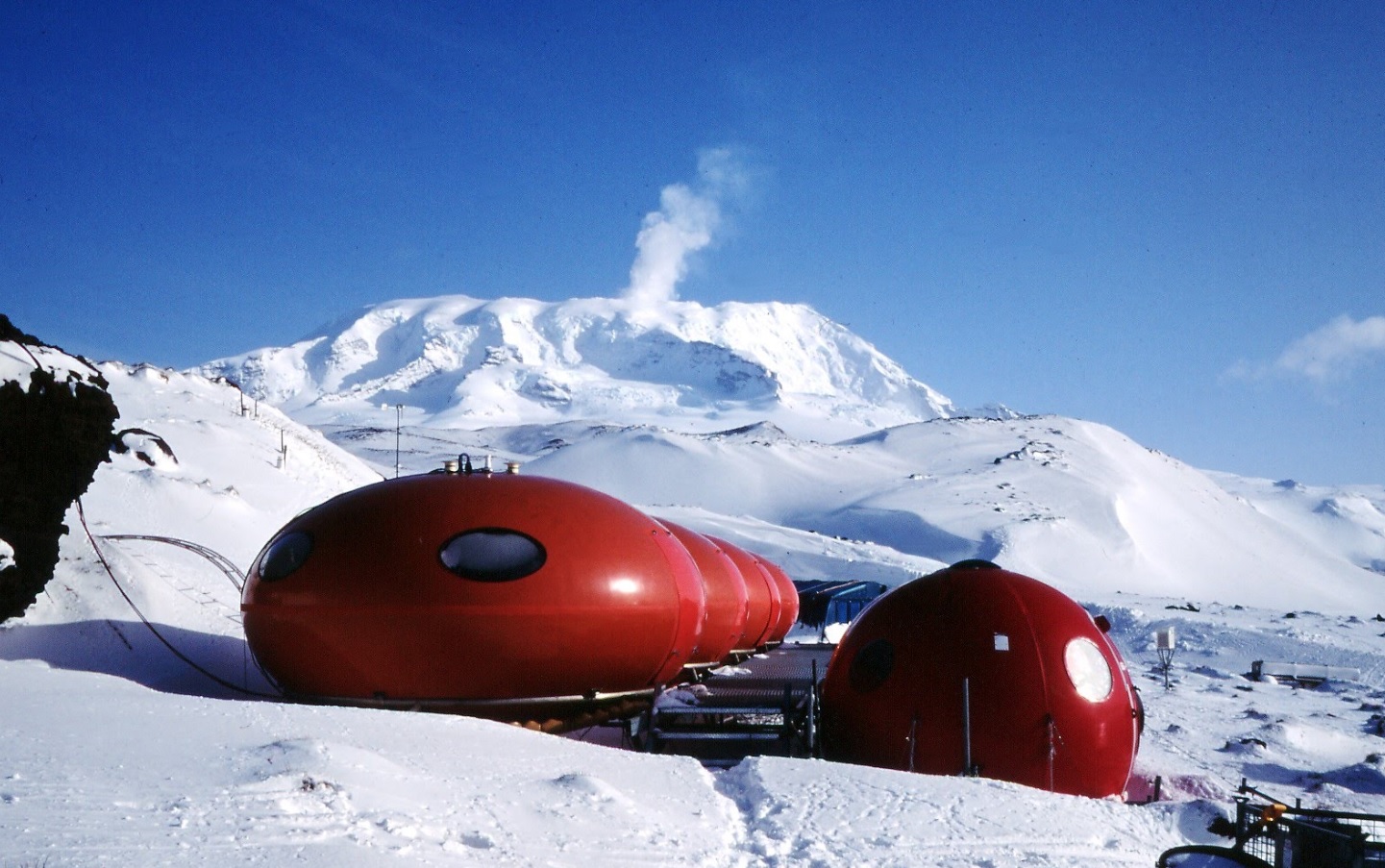 Photo by eccles26 from 1992 displayed here with permission. 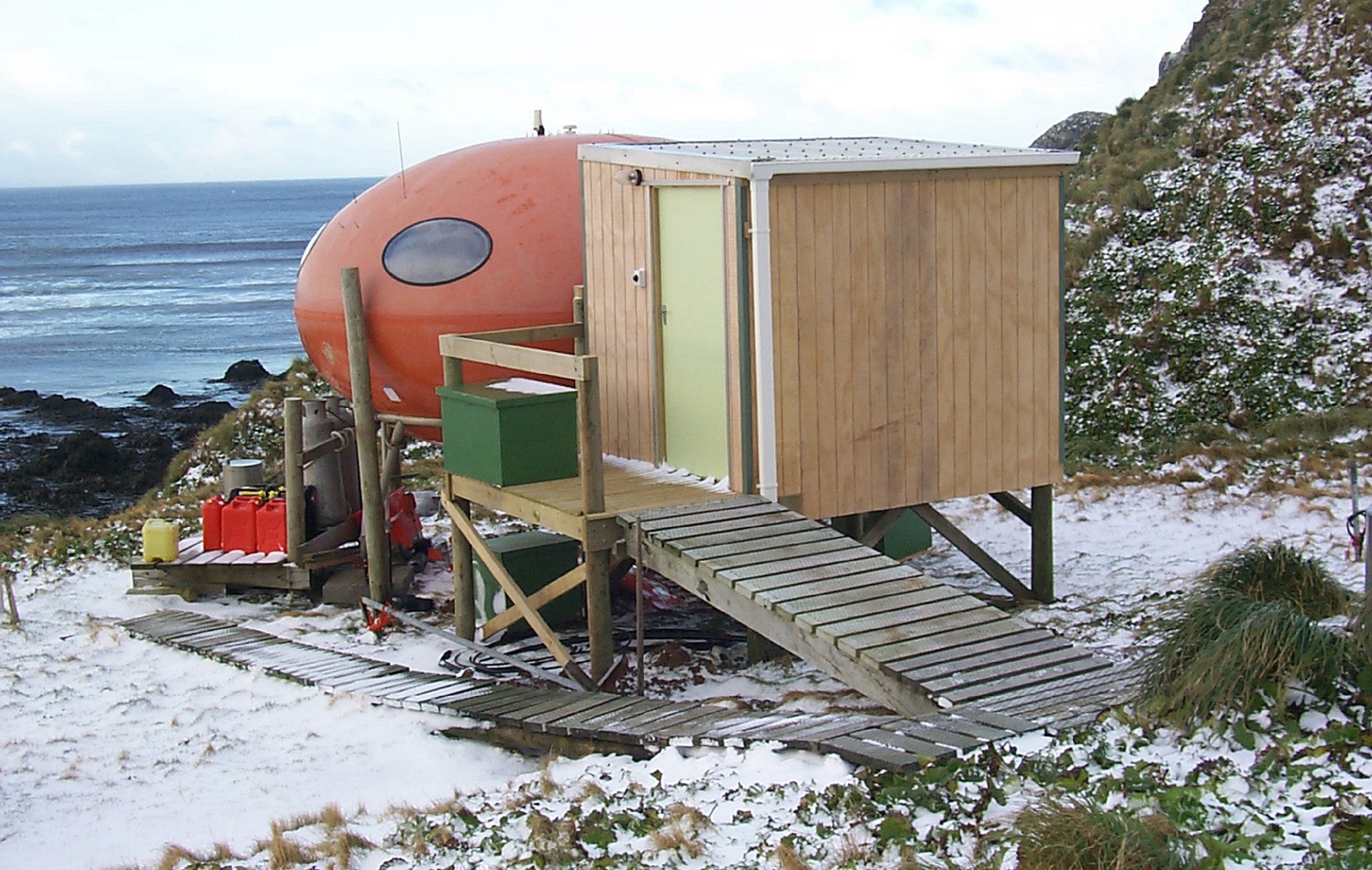 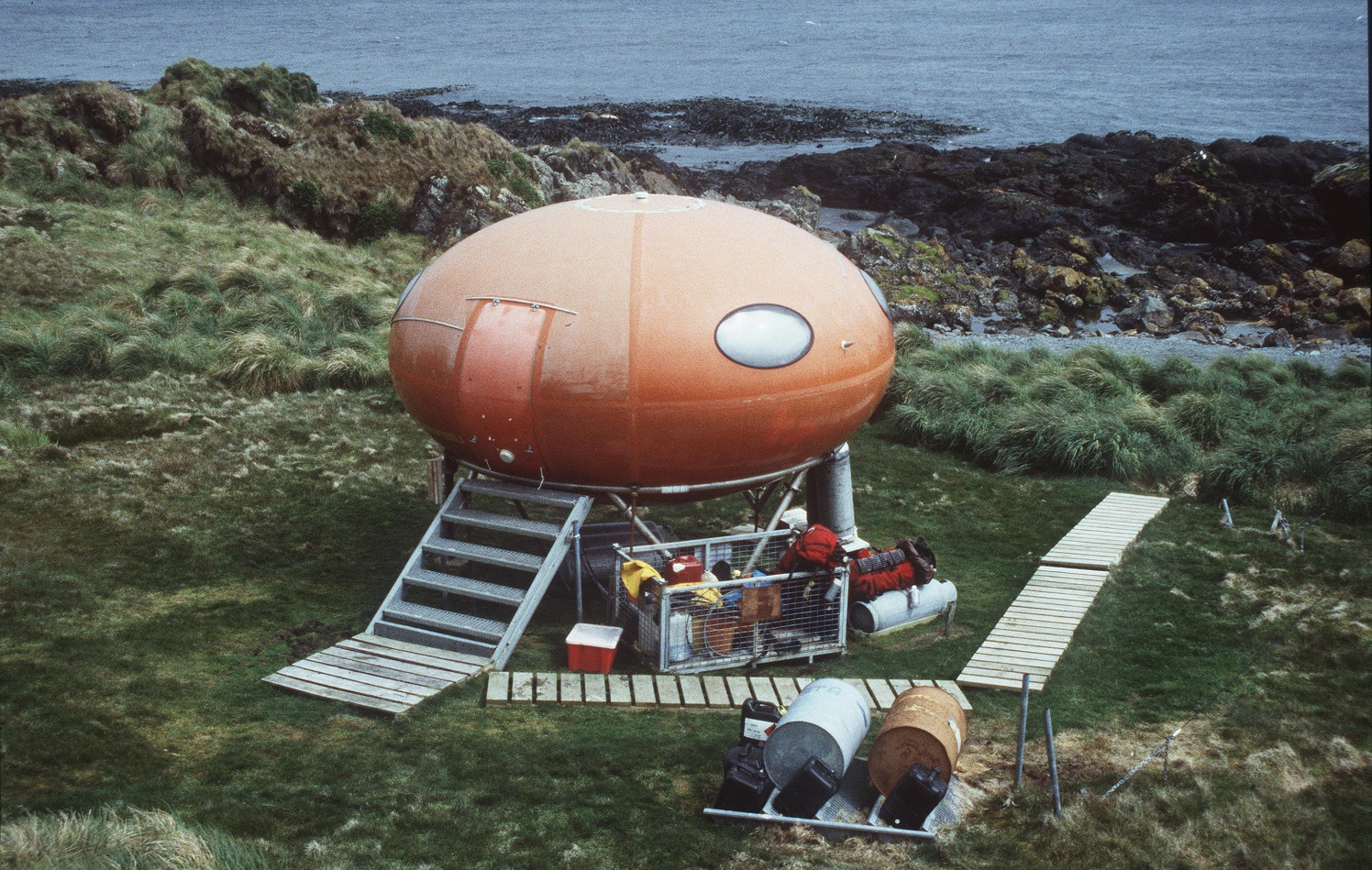 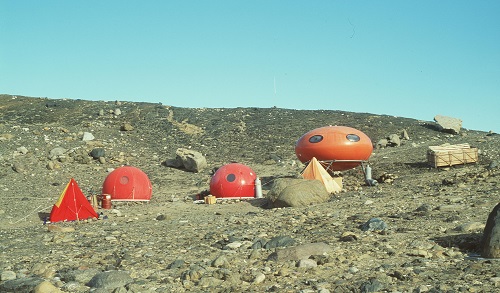 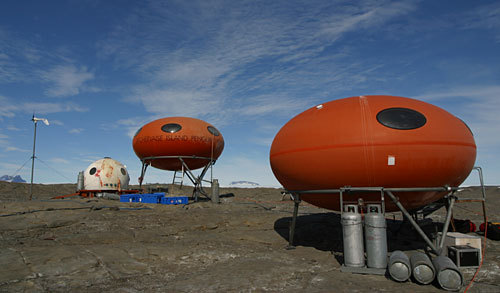 Photo by cosrologist from 122907 displayed here with permission.