According to the AAD (and they should know) there are currently 5 "Googies" in use; the two on Béchervaise Island, two on Macquarie Island (this one and the other at Brothers Point) and one on Hop Island near Davis. 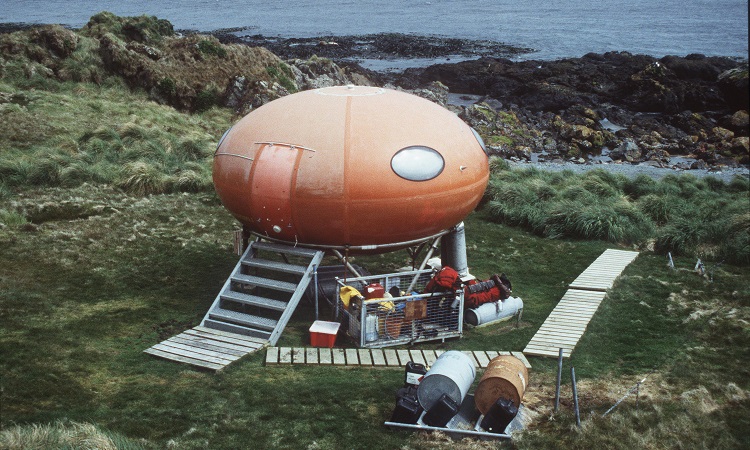 As far as the Waterfall Bay "Googie" is concerned we do not yet have a complete history and some of the references report conflicting dates but this "Googie" was among the four that were located at Spit Bay, Heard Island in the late 1980's and early 1990's and used as the base of operations for various research expeditions on the Island. 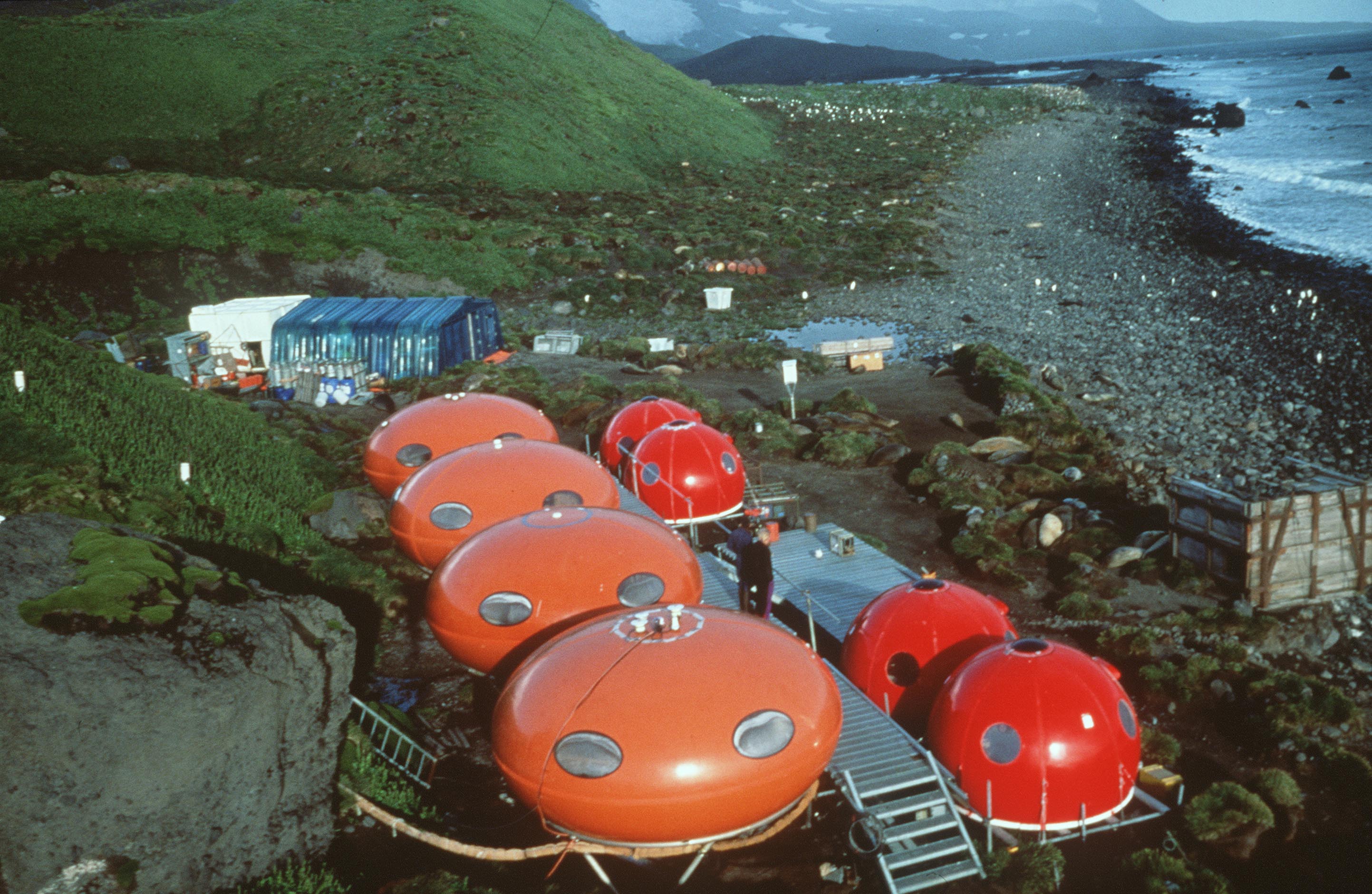 Following completion of various expeditions on Heard Island the "Googies" were returned to Australia and later relocated to new sites on Berchavaise Island, Hop Island and Macquarie Island. Of course in total between those locations there are actually five "Googies" and we have yet to establish the origin of the fifth.

This "Googie", variously referred to as being at Lusitania Bay or Waterfall Creek, was one of the ones from Spit Bay though there are conflicting reports as to the timing of the unit's arrival on Macquarie.

In an unpublished May 1995 AAD Report titled "The Field Huts of Macquarie Island" (AAD, © Commonwealth of Australia) Mike Woolridge tells us that the "Googie", or as it was sometimes referred to at the time, "New Lusi", was refitted in late 1993 after being removed from Heard Island and returned to Australia and that it was then flown into its current loaction and assembled between 21 and 23 December 1993. Interestingly Mike Woolridge also notes that the steps and other finishing touches were then added over the next few days. That would suggest that this photo was of the unit almost immediately after arriving on site because the steps are not present (you can actually see them on the ground bottom left of the photo).

On the other hand in the book "Subantarctic Wilderness: Macquarie Island " (Alex Terauds & Fiona Stewart, publ, Jacana Books and Allen & Unwin, 2008) we find conflicting dates. Here we read (Page 60) that two of the "Googies" that were removed from Heard Island were flown into Macquarie island to Brothers Point and Waterfall Bay in the summer of 1995/96.

We tend to think Mike Woolridge has it right, partly because of the detail and precise dates but also because the Google Earth historical satellite imagery dated 031405 clearly shows the "Googie" on site at that time and by my reckoning that would be late summer 1994/95.

Macquarie Island, or as it is often known, Macca, is an island in the Pacific Ocean of some 47 square miles lying South-South-West of New Zealand about half way to Antarctica.

The island is an Australian Territory and home to a permanent AAD base, the Macquarie Island Station and to two "Googies"; this one at Waterfall Bay and a second further north at Brothers Point. We are aficionados of Google Maps most of the time but in this case the map below (source: Wikipedia | Public Domain) shows the locations on the island to great effect (click the map for a larger image); Waterfall Bay is about two thirds of the way down the east coast of the island. You can also access a much better quality "pdf" map of Macquarie Island here.

The AAD website describes the Waterfall Bay hut as follows:

"Waterfall Bay hut is a 'Googie' style hut similar to that at Brothers Point and was put in place in 1993-94 as a replacement for the decrepit Lusitania Bay hut. It comfortably sleeps three people. Another three can fit on the floor, although this would be a crowd."

You can get a feel for what life is like on this remote island and a perspective on the "Googie" through the eyes of several intrepid adventurers who have blogged about their experiences on "Macca"; Claudia on Macca, Anthony Cowles on Macquarie Island and Macca Summer. Not all specifically refer to the "Googie" at Waterfall Bay; some talk of the one at Brothers Point but they do all give a perspective on the island and its "Googies".

If the blogs inspire you to want to visit the island and it's "Googies" it seems that Macquarie Island is indeed host to a small number of tourists through the course of the year. One company arranging such expeditions is Heritage Expeditions; others include Orion Expedition Cruises and Chimu Adventures. Though we doubt any of them could arrange for you to stay in one of the "Googies" those on Macquarie Island are probably the most hospitably located "Googies", the remaining ones are in Antarctica proper, so if you ever want to see one "in the wild" Macquarie Island might be the way to go.

The Google Earth satellite imagery showing this "Googie" is from back in 2005 but the AAD on this web page indicates the "Googie" is still in use (the page has a "last updated" date of 062911) and the blog Claudia on Macca in a post dated 091111 mentions the "Googie" - the latest is Claudia's date so that is the "confirmed" date for this "Googie".

The photos below are displayed here with the permission of the AAD. It should be noted that while the image attributions for the photos reference Lusitania Bay the AAD have confirmed that the Lusitania Bay and Waterfall Creek Locations are one and the same. 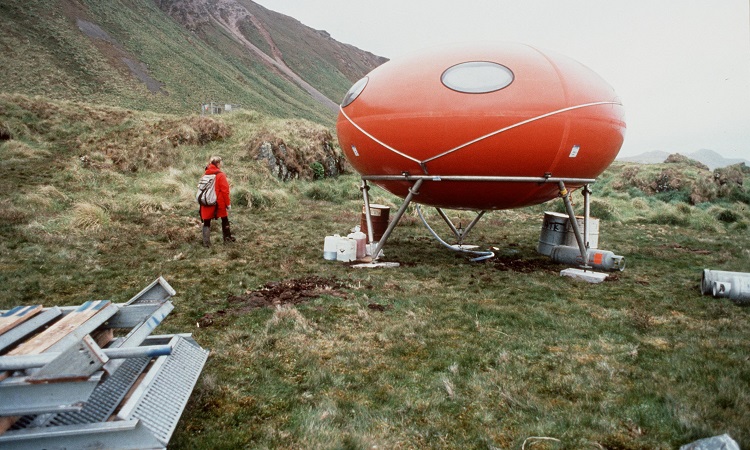 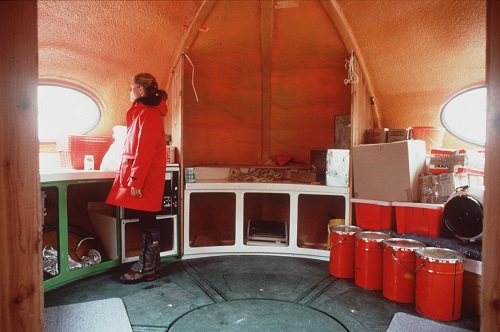