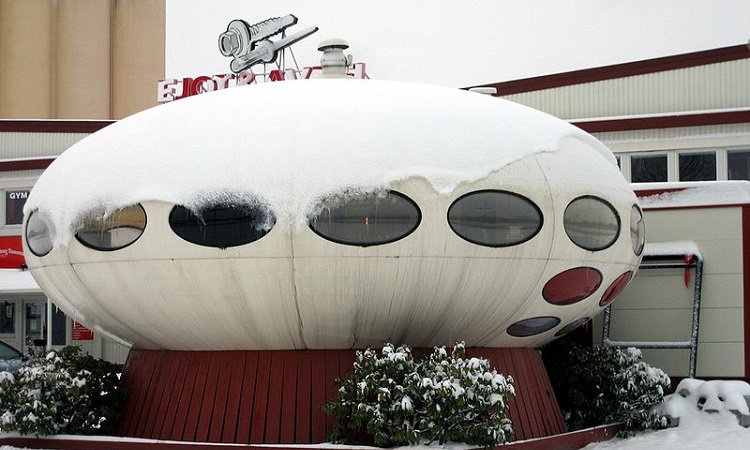 It has been a while since we saw a new photo of this Futuro, it tends to be one of the lesser photographed units, but we recently came across this shot by stanboulain that was posted to Instagram 052820. 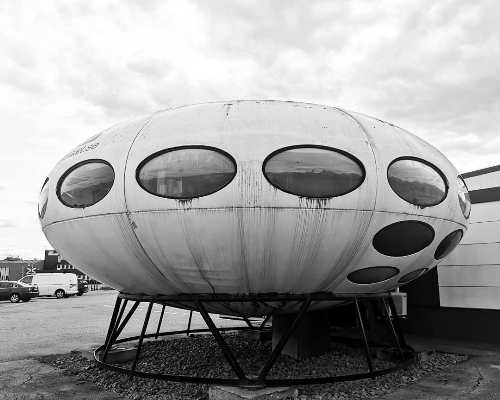 Yves Buysse (thanks Yves) recently sent us a link to an old 2011 article on this Futuro that appeared on the website na.se. While the article itself did not really include any new information it was accompanied by two interior photos, the first we have seen of this particular Futuro. The first photo carries no credit so we assume it should be credited to ne.se; the second is credited to Filip Erlind. 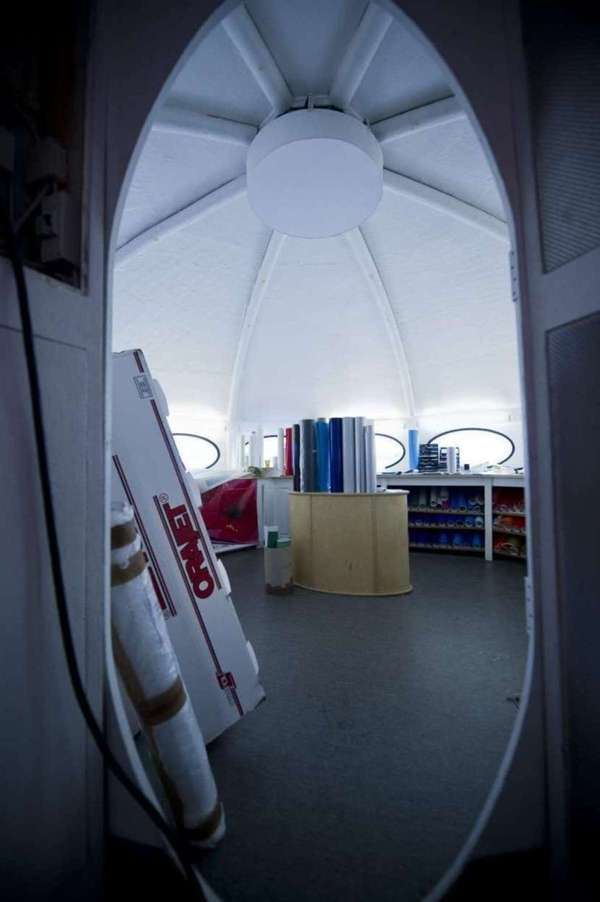 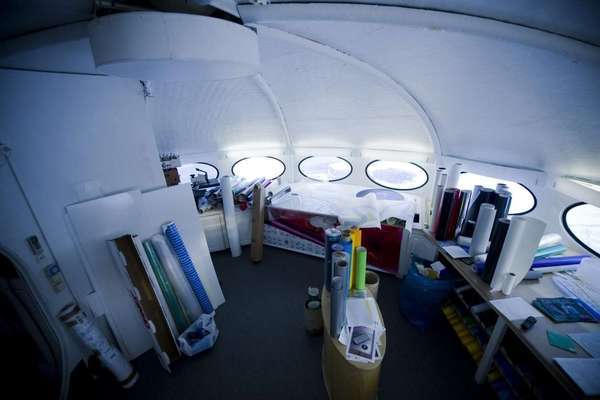 We recently came across this short video shot 080916 by John Kassman on Instagram.

The photo below was posted to Instagram by fleursblog. The photo is described as being from the book:

The book is described on the website bokus.com in this way (Google Translation of Swedish text):

"Barbie loves Sweden is a hitherto unwritten part of the Swedish pop culture history but also a delicious roadtrip image that celebrates Barbie and the timeless Sweden, 50s and 60s modernism. The authors take Barbie to the tracks of yesterday, the architecture that kept and places that have remained untouched. For camera angles showing Barbie in her Swedish 60s."

The location of the shot is not identified other than the "countryside"; that said it is almost certainly shot in Örebro based on the color of the Futuro, appearance of the main roof vent and the fact that other then the Swedish Air Force units there are no other known Futuro in Sweden.

All in all it makes for a rather unusual Futuro photo. 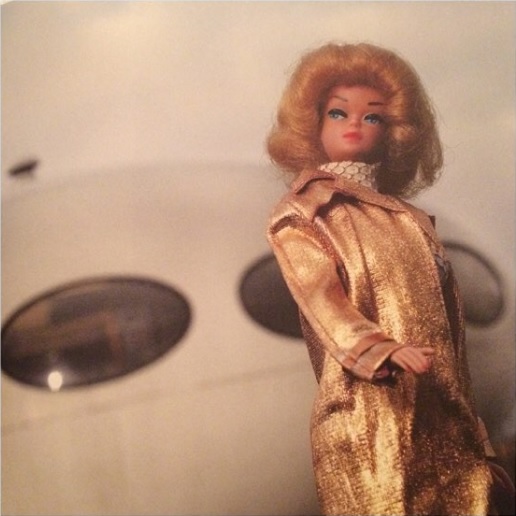 Came across this rather interesting photo of Orebro the other day on photo.sh by saabrobz (originally posted to Instagram).

The photo has an aged appearance but almost certainly this is the result of editing (very well done in our opinion and resulting in a photo we very much like). The logo and associated text on the Futuro is the current iteration (a check in Google Street View confirms this) and, as can be seen in this photo, that has not always been the case. 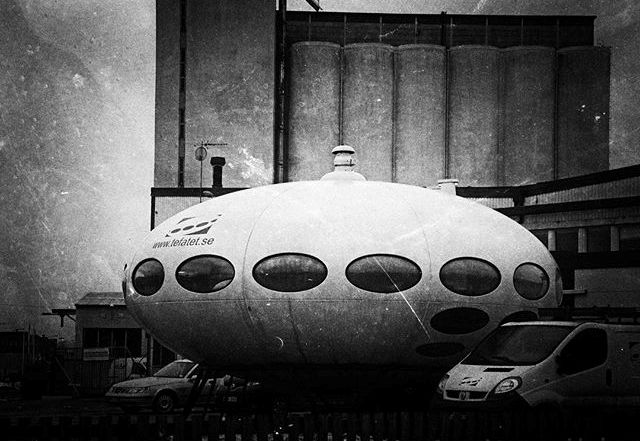 Achim Breiling recently sent us a link to an old version of the website of the company that owns and uses the Orebro Futuro House captured by the Wayback Machine (In Swedish | Google translation to English here); the company name was Skyltmålar'n.

The Futuro House and/or the company using it may have changed ownership at some point but the domain hosting the website is the same as the current one and, while it is difficult to translate any of the Scandinavian languages using Google Translate, it seems quite likely that this is the same company as the current one and that at some point they rebranded themselves as Tetafet; perhaps to take advantage of the marketing power of a Futuro House, certainly from a marketing perspective the Futuro House is very memorable and in some ways that is what marketing is all about, providing a trigger for a potential client to "remember" a brand.

The two most interesting things to be found on this "old" site are a photo of the Futuro showing it having clearly different markings and branding than it currently has and a short video clip with shows the Futuro House that was exhibited at the 1971 exhibition Internationale Kunststoffhaus Ausstellung der Welt in Lüdenscheid, Germany. There is also mention of the fact that the Orebro Futuro came from an exhibition in Stockholm but there is no indication of the date of that exhibition.

The video can be found using this link to the Wayback Machine or embedded on our Exhibitions page.

Located in Örebro, Sweden this Futuro is owned and used by Tefatet, a company in the signage business.

Interestingly the English translation of the Swedish word "tefatet" is "saucer". In addition if you look at the Tefatet Website you will see that the company logo is a representation of a Futuro (you can see the logo on the picture of the Futuro on their site or in the Google Maps "Street View" by zooming in on the Futuro). We can find no reports of how long the Futuro has been on site or owned by the company but if you take the logo and the name into account it seems likely that the Futuro was there right when the business was started.

The image below is a screen shot from Swedish Search Engine Hitta.se which provides a nice "Street View" perspective on this Futuro. Wikipedia describes Hitta.se as a search engine offering telephone directory, addresses and maps. You can access this location live in Hitta.se here. 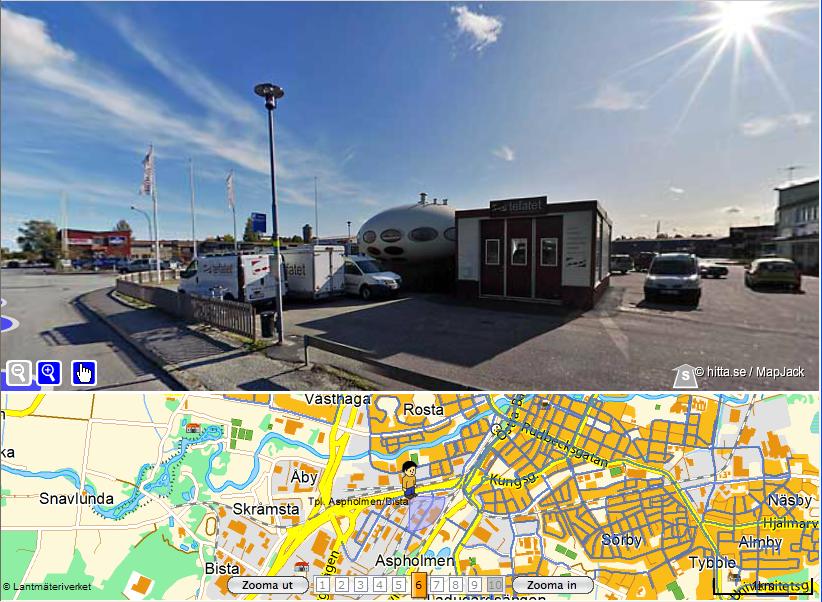 A couple of additional images can be found using the links below:

This photograph by prefab_and_more taken 061222.