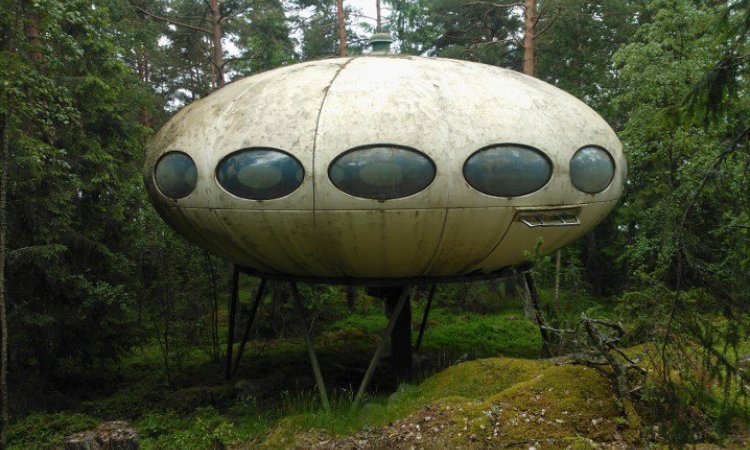 This is one of the least photographed Futuros so it is always fun to see new photos, particularly when they give a new perspective.

These two photos are by Eimi_S who posted them to her blog here recently. Looks like the photos were taken 050722 assuming Google Translate is doing a good job and of course that is not always the case with the Scandinavian languages. 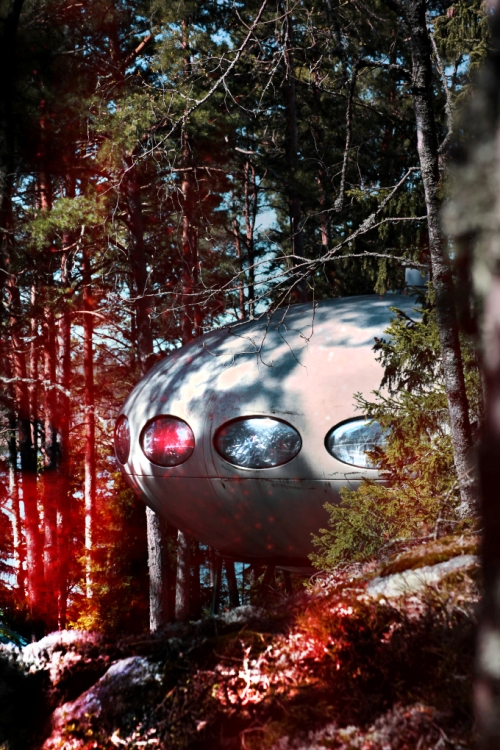 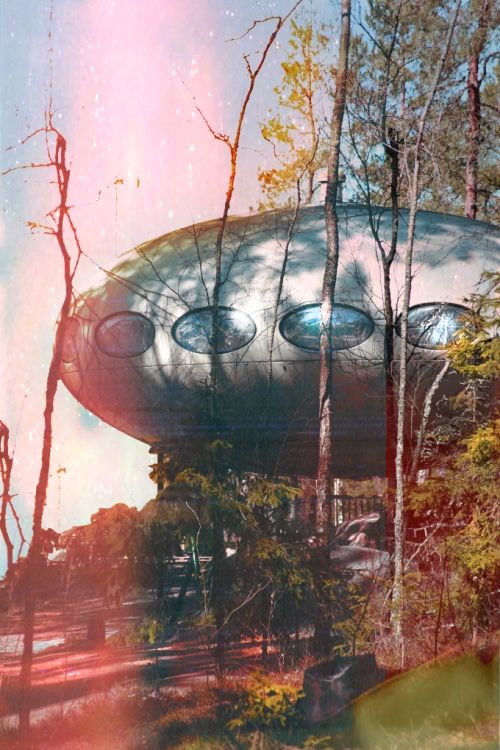 Our friend and fellow Futuro enthusiast Yves Buysse (@prefab_and_more) is always coming up with something new and here we have a photo of this Futuro in the 1970's during its time in Turku that we have not seen before. As always Yves thanks for sharing your finds! 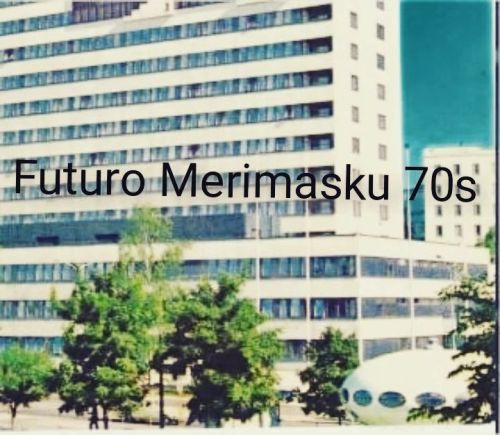 This Futuro is one of the lesser photographed units and also one of the most difficult to find. However Rita Maria (aka @spacerita on Instagram) is nothing if not determined in tracking down and photographing Futuros and, where many would have fallen by the wayside, Rita persevered and eventually found the unit and was able to photograph it.

Rita tells the story this way"

"The exact location was unknown but the area code was somewhat given. One beautiful June morning, I drove a few hours towards the marked location, only to realize that the Futuro wasn't anywhere nearby. The area was beautiful with its calm, coastal roads and the surrounding, wooden little summer cottages. The day was also beautiful in its early summer light, so I started walking and asking around. Nobody in the harbor of Merimasku had seen the missing Futuro, even though some had heard about it over the years.

After finally getting a lead (it's hidden on some tucked away property behind the old church), I drove hours on the unpaved roads (with no signal) looking for it. But after seeing the third "road ends" sign on a narrow dirt path, I finally decided to give up the search, empty-handed. In order to get back, I had to turn my car on someone's backyard, when a guy driving a tractor, Pekka, came to ask me whether I was lost and needed some help. I quickly explained the situation and the next thing I knew, I was in a local potato farm, tasting some fresh produce. Long day cut short, after a plenty of potatoes, new directions on many new dirt roads, I eventually found the missing Futuro."

Thanks for sharing your work Rita; looking forward to seeing what you get up to in the future. 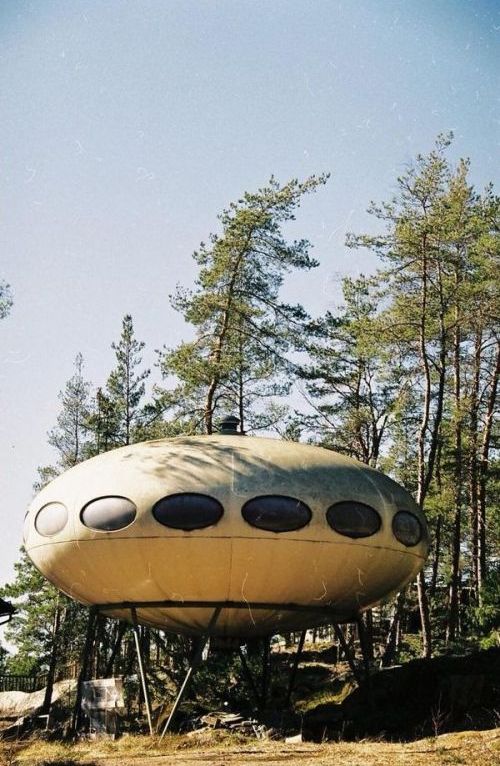 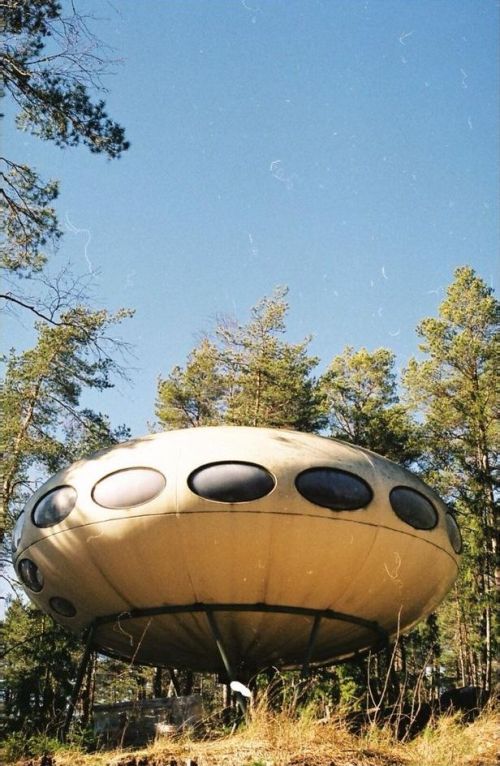 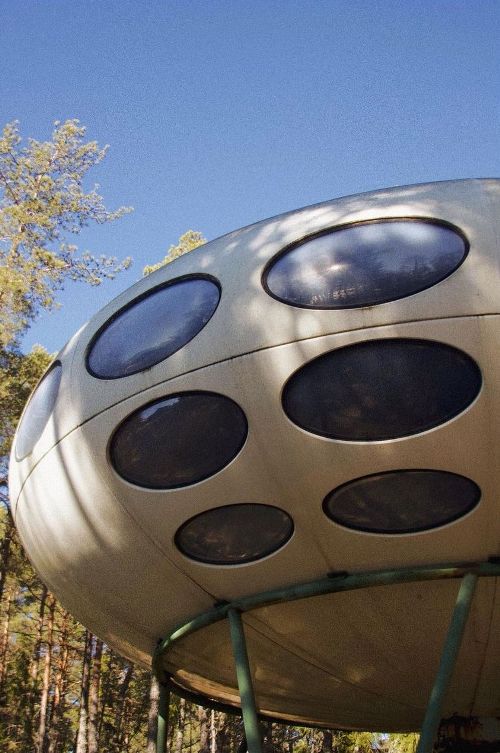 It is always great to see the Futuro receive recognition for its historical and architectural significance and an article published on the website rannikkoseutu.fi recently reported on one such example.

The article tells us that the Finnish Heritage Agency made a small grant (€5000) to cover some renovation costs for this Futuro. The article is behind a paywall so we were unable to access much more than the headline but we were able to get a little more information from Futuro historian Marko Home; as always thanks for your help Marko.

Marko tells us that the windows of the Merimasku Futuro leak and the owner is planning to replace them with replica windows made by Ekin Muovi or some other plastic manufacturing company. Though the grant of €5000 covers only part of the cost of this work it is nevertheless great to see that the agency believes the restoration and maintenance of a Futuro is worthy of even a small grant.

According to Google Translate the photos description reads as follows:

"Treasures from the archives: TYS collection operations center for the work in 1969-1970, designed by architect Matti Suuronen Futuro house, Which was Placed in the student houses in the foreground .. The Foundation's own premises was completed in the summer of 1970 and then the "UFO" was rented an office for the National Coalition for students. During the years 1969-1970 this Futuro House (by Matti Suuronen) worked as TYS's fundraising 'headquarters"."

This is appears to be the original (and a much higher res) version of a photo of that can also be found on page 38 of the book "Futuro: Tomorrow's House from Yesterday" edited by Marko Home and Mika Taanila. 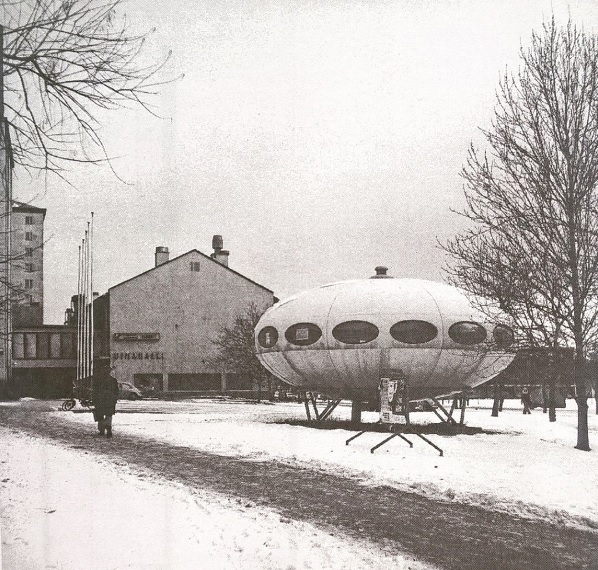 The video below is U.F.K., a short film by Jussi Vesanto and Juha-Pekka Mikkola, which features music by the Atomic Blast. A Futuro House is featured which first appears 3:43 minutes into the film.

Given the Finnish origin of the film and the appearance of the Futuro this is almost certainly a film shot at Merimasku. Though the steps do not appear to be blue as seen in other photos which might cast a little doubt on that assumption there is certainly no resemblance between the Futuro in the film and any other Futuro in Finland so we do believe this was shot at Merimasku.

The photo below is one of the few we have seen of this Futuro during its time in Turku and it is without a doubt the best. The photo was taken 051470 by C.J. Gardberg and it can be found on the website museot.finna.fi. It is displayed here under CC BY-ND 4.0 license. Our thanks to Yves who came across this and sent us a link. 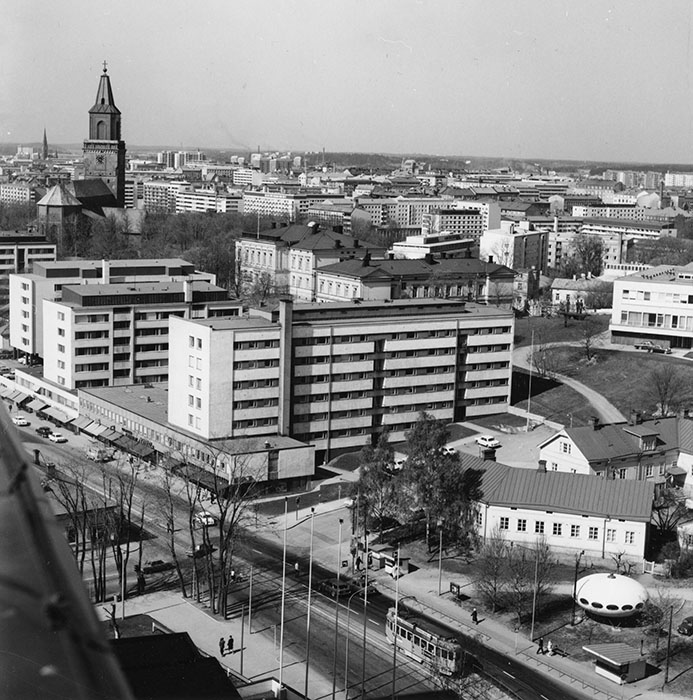 Many of the documented remaining Futuros are in a poor condition and, for us at least, it is always excellent news when we hear of plans being made to restore a Futuro.

On 101715 Marko Home, co-editor with Mike Taanila of the book Futuro: Tomorrow's House from Yesterday, visited the Merimasku Futuro with Sami Supply who was on the team that carried out the conservation of Futuro #000 (Rotterdam), supervised the conservation work on Futuro #001 (WeeGee) and is probable the world's leading Futuro conservator.

The owners of the Merimasku Futuro are planning to renovate the unit and Sami Supply, who will be assisting with the project, was visiting Merimasku for the first time.

Marko took the set of photos which can be seen below and kindly allowed them to be displayed here on the site; thanks Marko. Interesting details in the photos include a shot of the original heating/air conditioning unit (second to last photo) and the original #015 identification plate (bottom right).

Two of the interior shots also show the "humps" on top of the "steps" which Marko confirmed were lights; we had previously not been sure of the purpose of these humps though lights had seemed a reasonable theory. 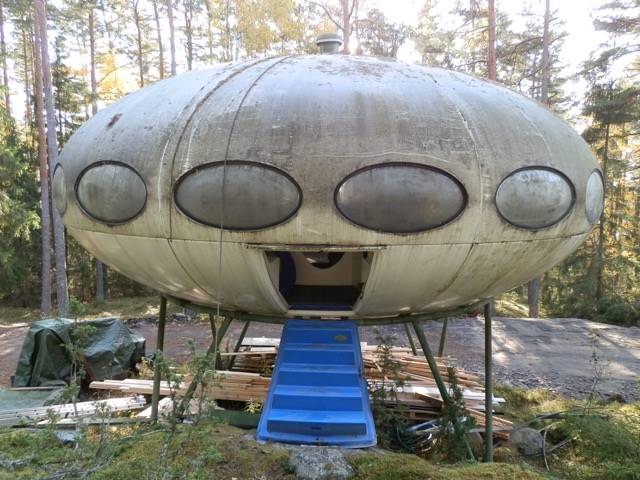 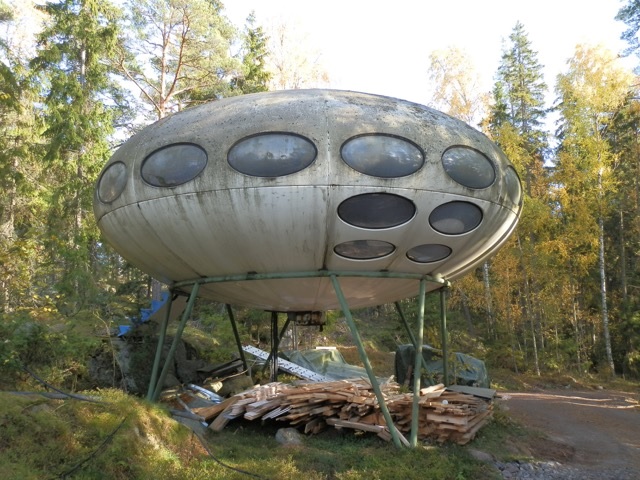 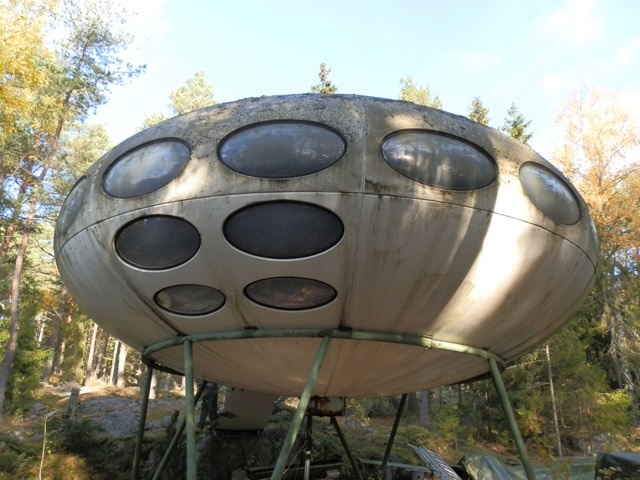 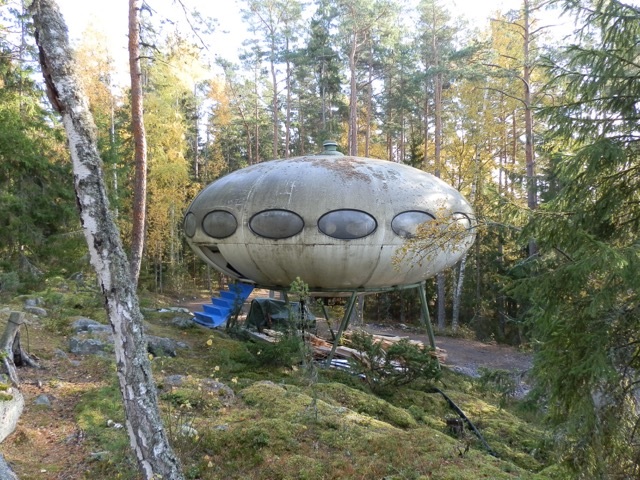 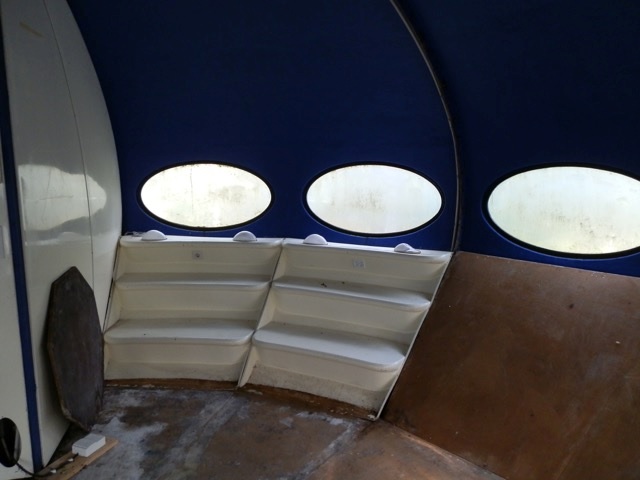 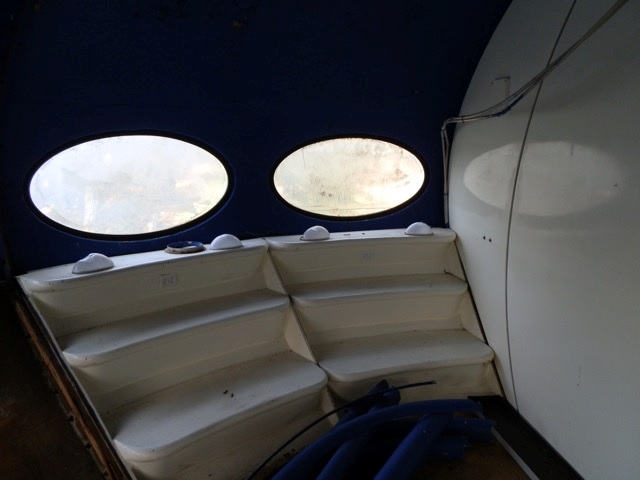 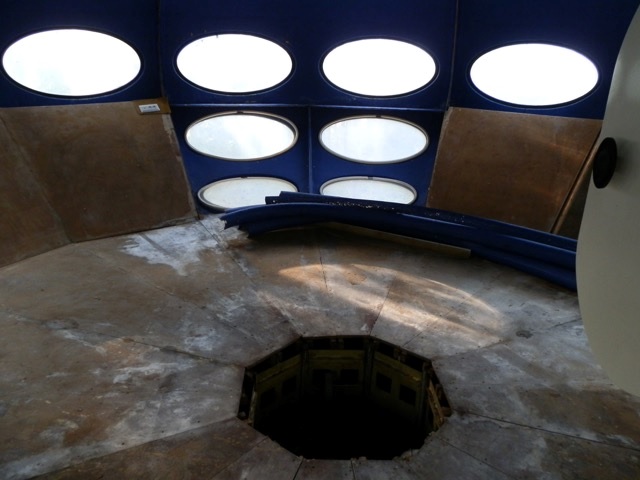 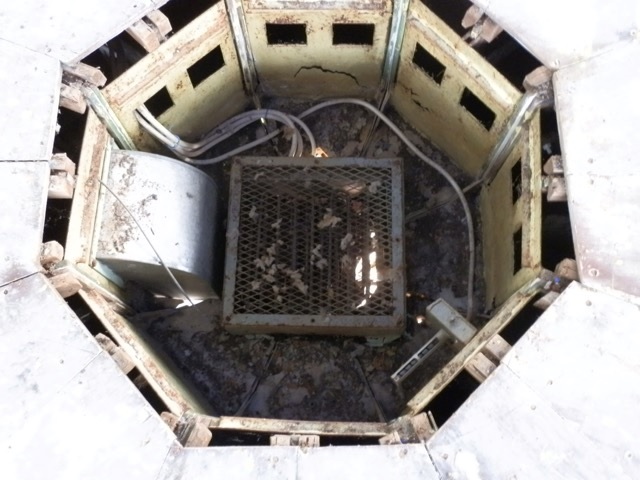 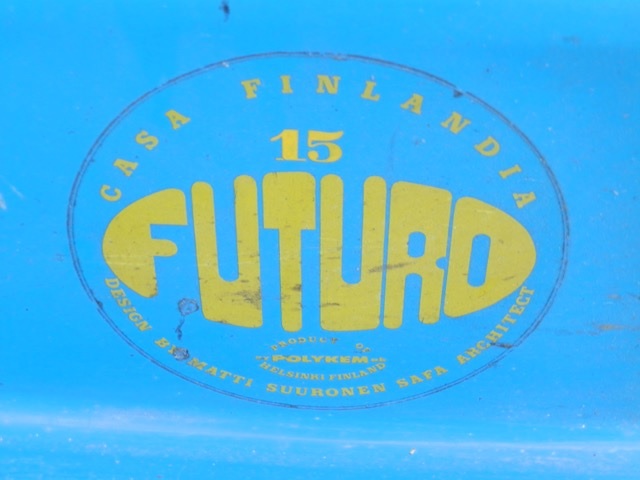 We have not come across many photos of this Futuro so it is great to be able to add a recent one. This photo was taken by Hannu Suominen in February 2014 (after some of the trees around the Futuro had been cleared). The condition of the Futuro appears to be very similar to that seen in earlier photos. Our thanks to Hannu for allowing us to display his photo here. 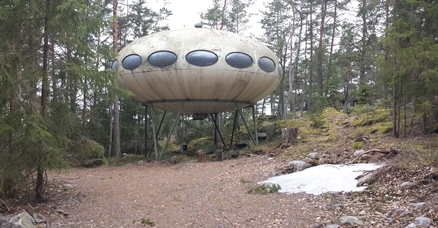 It is always interesting to us to see how some Futuros appear everywhere online, feature in countless photos and on a multitude of web pages while others are eerily absent from the web almost as if they are hiding. Of course it may be precisely that, a form of hiding; we imagine a Futuro draws a significant number of travelers trying to catch a glimpse and so perhaps for simple, and understandable, privacy reasons some owners try to keep information to a minimum. Whatever the reasons this Futuro is certainly an example of a Futuro where information is hard to come by.

In the book "Futuro: Tomorrow's House from Yesterday" edited by Marko Home and Mika Taanila we learn that this Futuro, #015, started out life at the Turku Student Union where served as office space during 1969 and 1970. The image below from page 38 of the book shows the Futuro during its time in Turku. The only other thing we learn about the Futuro in the book is that it is currently located in Merimasku. 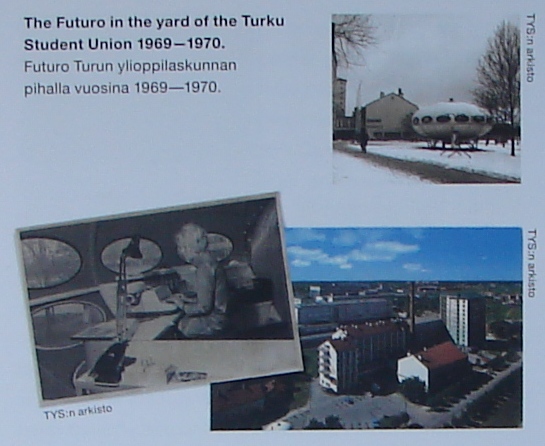 Anna-Maija Kuitunen's final thesis for the Metropolia University of Applied Sciences in Finland, an excellent reference document when it comes to Finnish Futuros, tells us a little more. Information in the thesis was the result of an interview with the Futuro's owner on 051710 so is about as reliable as it gets.

We learn that the Futuro had (at the time the thesis was written - 2010) been owned by its current owner for about 10 years. Prior to that and post its time in Turku the Futuro had had several owners; however we learn nothing about those owners or where the Futuro might have been located during that time though we do know it had been in Merimasku longer than 10 years since the Futuro was "thrown into the bargain" when the current owner purchased the property upon which it sits.

Kuitunen also writes that when the Futuro last changed hands it did so unfurnished but fitted with carpet. The current owner recounted in the interview that the Futuro is in generally good condition though some of the carpet had been removed due to mold. The owner did indicate an interest in restoring the Futuro sometime in the future but mentioned no immediate plans to do so.

In 2012 Finnish artist Henna-Riikka Halonen created her work Moderate Manipulations which features the Merimasku Futuro as a back drop. The video is a little too esoteric for "simple souls" like us but the footage of the Futuro is one of the very few glimpses of the Merimasku Futuro we have been able to uncover. You can view a partial preview of the video below or see it streamed online on the av-arkki.fi website here. We have been unable to find a full version of the video so if anyone is aware of anywhere it can be viewed complete please let us know.


These two images are by Henna-Riikka Halonen and can be found in her Portfolio (downloadable pdf file here).We have not checked the video footage to see if they are actual photos or stills from the video; one shows the exterior of the Futuro and the other the interior. The interior shot clearly verifies the information in Anna-Maija Kuitunen's thesis about the Futuro being unfurnished and having had part of the carpet removed. 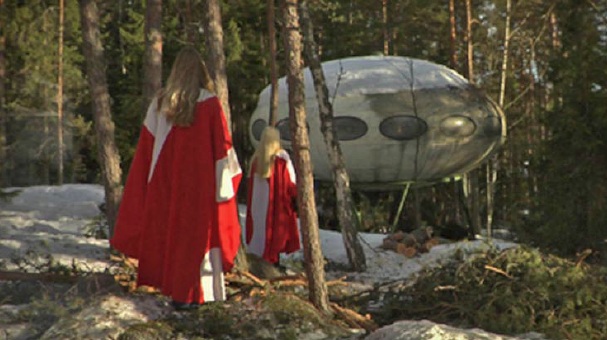 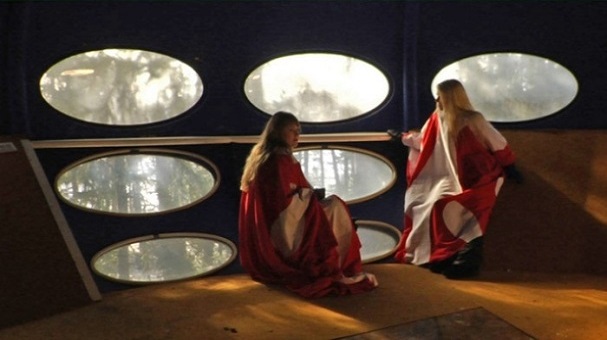 There are a couple of things to note from the video and the Henna-Riikka Halonen stills. We can clearly see verification of Anna-Maija Kuitunen's report that the Futuro is unfurnished and that part of the carpet has been removed. The costumes worn by the models are quite clearly inspired by the C. G. Hagström shots in and around a Futuro of models wearing Vuokko fashion - compare the two images below - the first is one of the C. G. Hagström shots from page 146 of the book "Futuro: Tomorrow's House from Yesterday" edited by Marko Home and Mika Taanila and the second is a capture from the video. 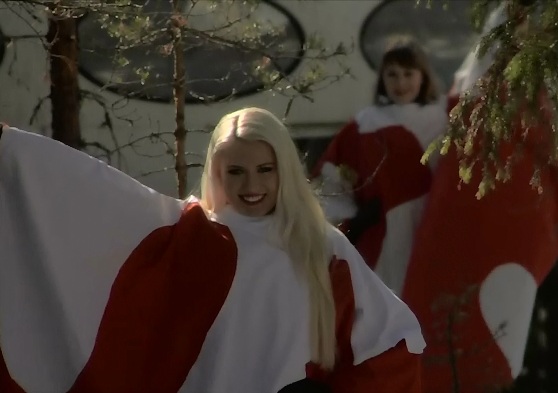 So, that's it, not a whole lot of information so if you have any photos or information that can add to this article please let us know. In particular it would be great to hear about anywhere the Futuro may have been located during the time between Turku and Merimasku.

This photograph by prefab_and_more taken 061122.