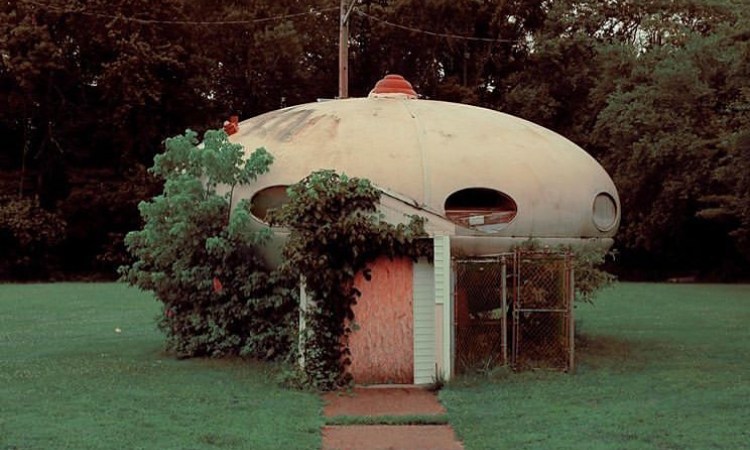 We have seen the odd photo of the interior of this Futuro over the years but we have never had as good a look as we do in this video footage sent to us recently by W. Barksdale Maynard. Seems like the interior of the unit is deteriorating over time as best we can tell from looking at what earlier photos we do have.

The somewhat eclectic but ever so awesome press photo shows this Futuro being delivered to the parking lot of the Village Mall in Willingboro Township, New Jersey on 121473.

This Futuro was one of, we believe, two that was used as "Space Banks" by City Federal Savings and Loan at various locations around New Jersey in the early 70's. As we know this unit has a non typical window configuration with only 8 windows; this was a "security feature" though frankly a thief would likely only need to break in through one window so we are not too sure how effective this was. The unit was relocated to Mill Creek Park, Willingboro having been moved there from the Village Mall in November 1975.

The mall was still under construction at the time the Futuro was installed and it was the first business to open (the day after it was delivered).

The rear of the photo carries handwritten text reading "The City Federal Savings and Loan Bank", the date 121473 and this text on a newspaper clipping attached to the photo:

"The City Federal Savings and Loan Bank, complete with space tellers (top photo) Susan Price and Chris Vitale, was immediately hooked up to utility lines and ready to do business tomorrow."

We do not know what publication or publications this photo appeared in or what other photos it appeared with (the notation "top photo" implies there were others); there is some additional text that may have provided this information but it is covered by the press clipping and unreadable.

The inclusion of the "space tellers" make this one of the more unusual and interesting Futuro photo we have come across. 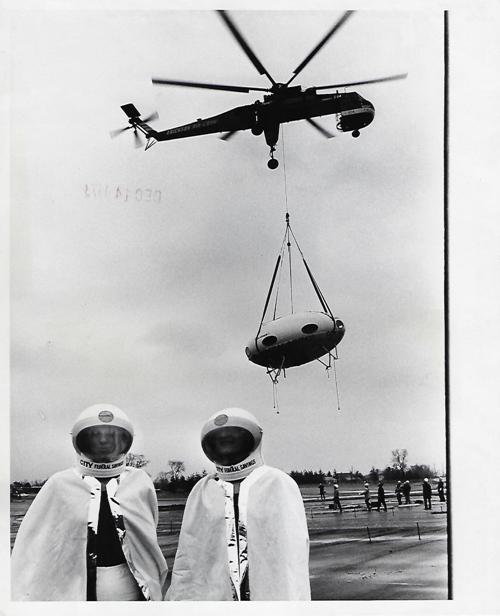 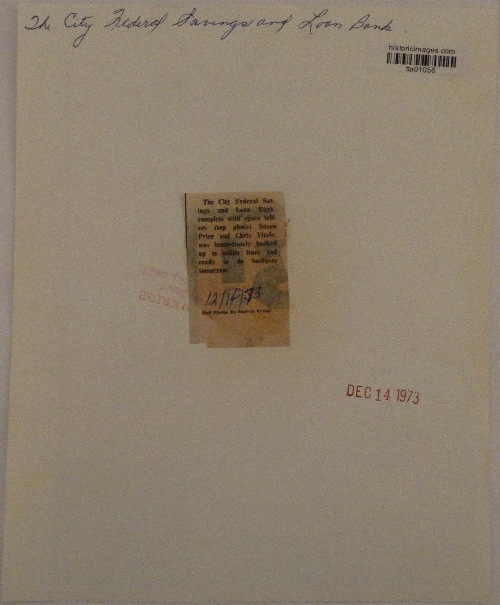 We love this photo that features this Futuro in the Futuro's "natural habitat" - snow. The photo is by BoroTV and the original photo can be found on Instagram here. 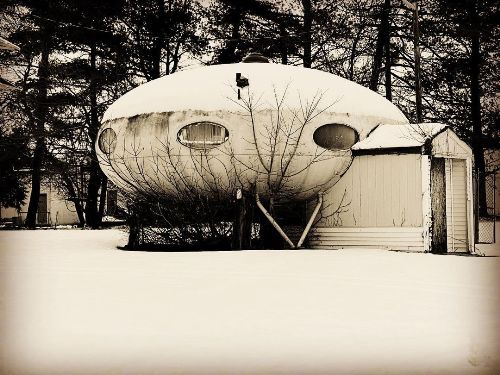 and it lists among its various programs the following:

"publishes the annual 10 Most Endangered Historic Places in NJ list, which draws attention to remarkable sites and to their many challenges. We believe that listing them will be a catalyst for change and that positive solutions can be found for their preservation."

The criteria for inclusion in the 10 Most Endangered Historic Places in NJ list are listed as being: It is always great to see a Futuro recognized for its architectural significance and for the need to preserve it and so we were happy to see that the 2020 list included both this Futuro and the other New Jersey Futuro in Greenwich. 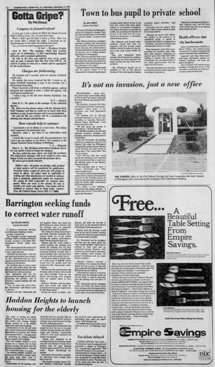 The 091576 issue of the Cherry Hill, NJ publication the Courier Post carried an article on this Futuro titled "It's not an invasion, just a new office".

The article, which is accompanied by a single photograph, reported on the official "dedication" of the structure as Willingboro Township's Parks Information Office. The structure had actually been moved (by flatbed truck) to Mill Creek Park in Willingboro many months prior in November 1975 but local authorities had not previously got around to scheduling the dedication.

An issue of the same publication almost thirty years later (see the see the 120416 update below) suggested that the move to Mill Creek Park was facilitated by a helicopter. Such confusion is not unusual where the history of Futuros is concerned and when we came across this article it seemed more likely that is was correct being written at the time.

The history of the "Space Banks" seen around New Jersey in the early 1970's has always intrigued us and as a result of reading this article we decided to put together a history of them, as best we could based on the available information, which was also added to the "Concept & Design" page today.

That work confirmed what we believe was the most likely history of this Futuro which saw it installed 033173 at the Lakewood Shopping Plaza in Lakewood Township, New Jersey and then later in the parking lot of the Village Mall in Willingboro Township, New Jersey on 121473. In November 1975 it was moved by flatbed to its current location.

We have always loved black and white photography and this is a great example we came across the other day; the photo is by gary.ell and the original can be found on Instagram here. 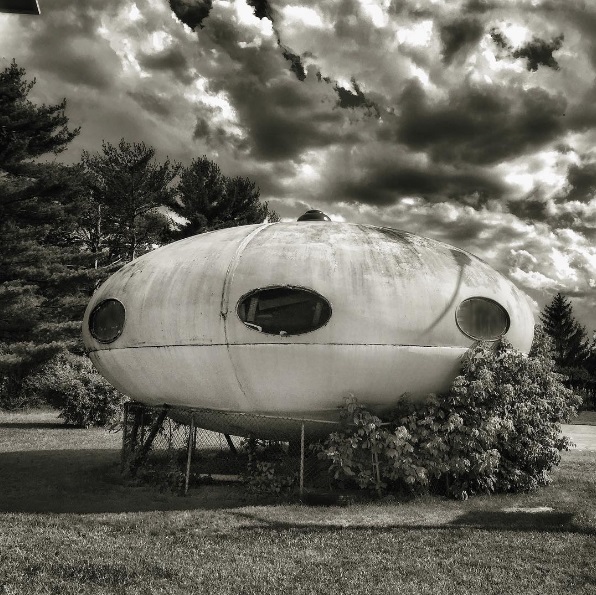 The 110504 issue of the Cherry Hill, NJ publication the Courier Post carried an article on this Futuro.

The article appeared on pages 1B and 3B under the headline "Spaceship never took off" and is accompanied by two photos. The article tells us that (at the time) the Futuro was owned by the town and used as an office by the Police Athletic League.

The article adds a little history reporting (and thus confirming) that this Futuro was once a banking office located in the parking lot of the Acme & Caldor shopping center on Route 130. It was flown into Mill Creek Park by helicopter sometime in the 1970's where it served as a security office for the park and then a tennis office prior to being taken over by the Police Athletic League. 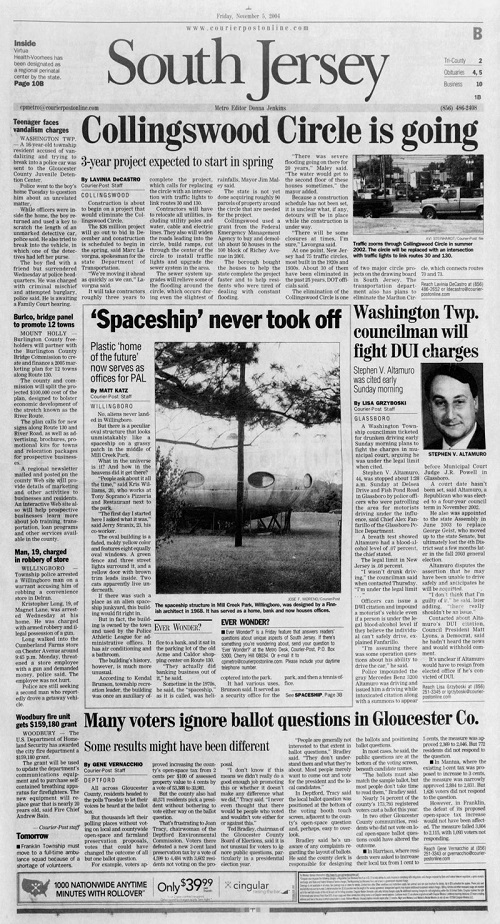 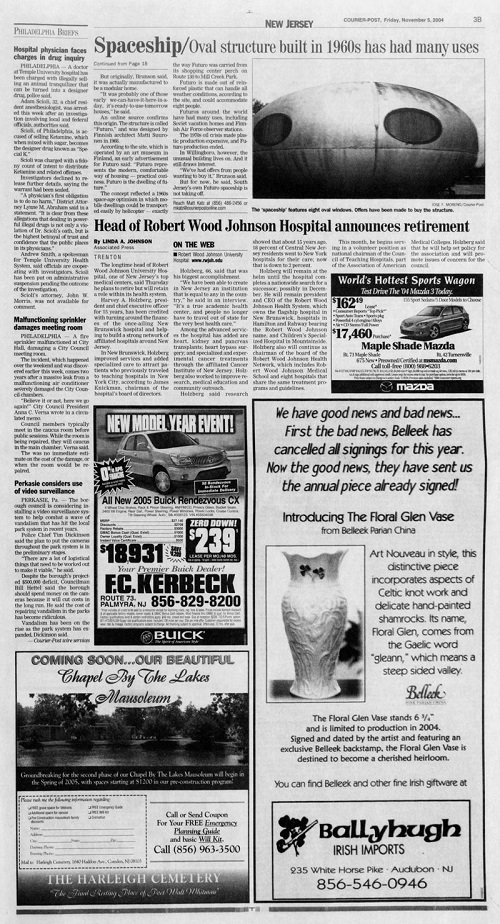 We need to correct ourselves; this is clearly not Willingboro as the Futuro in the photo has the standard number of windows and not the reduced number seen in the Willingboro Futuro. How observant we are! Now we have to figure out which Futuro this is.

This vintage 8" by 10" photo, added to our collection of "Things Futuro" this week, shows what is likely this Futuro being delivered by Sikorsky S-64 Skycrane to a mall in Woodbridge, New Jersey in 1972. The photo does not carry any identifying marks either front or back. 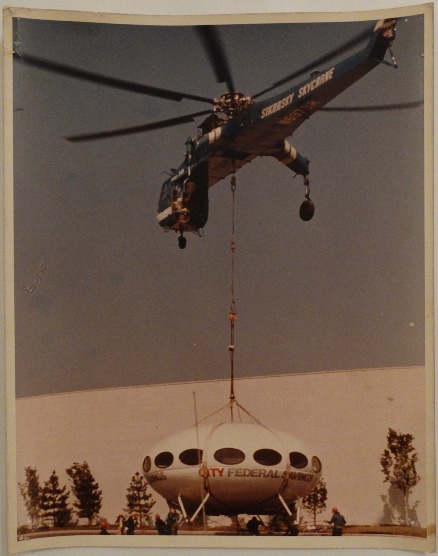 These photos were shot 110814 by Alasdair King; the photos are high res and they include two photos of the interior of the Futuro. Our thanks to Alasdair for sending us these photos. 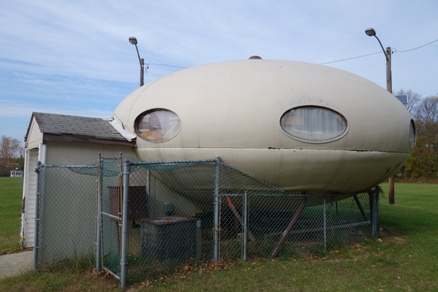 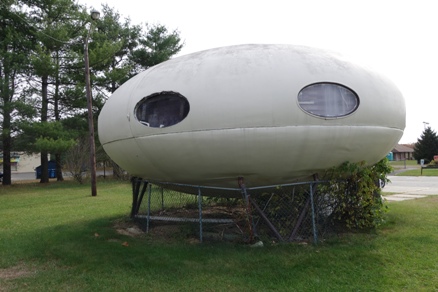 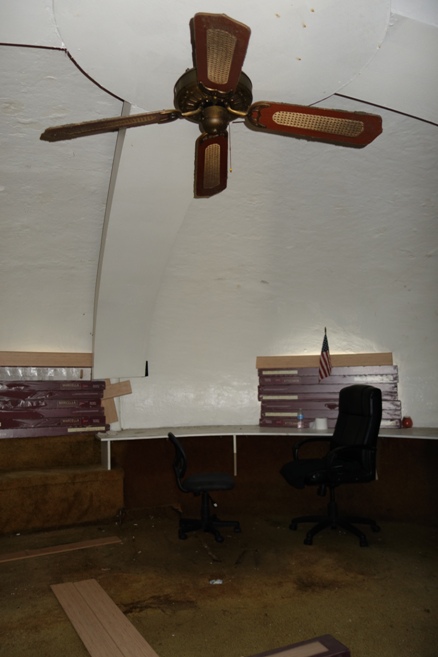 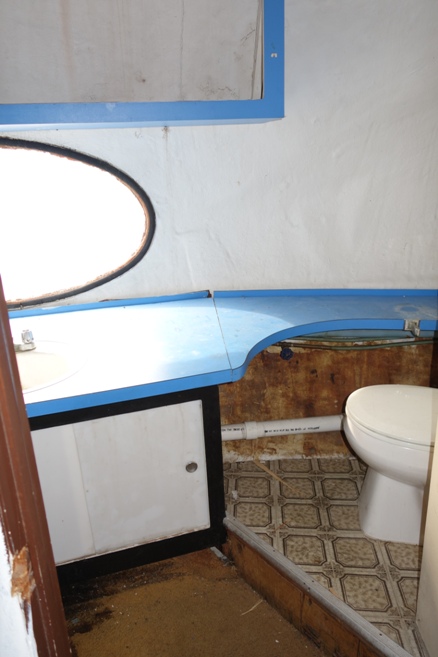 These two photos were taken 103014 by Pam Petrone and provide an updated look at this Futuro. Our thanks to Pam for sending us these photos. 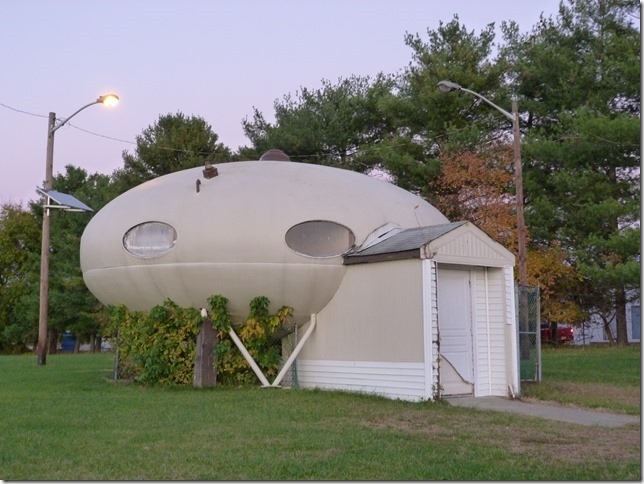 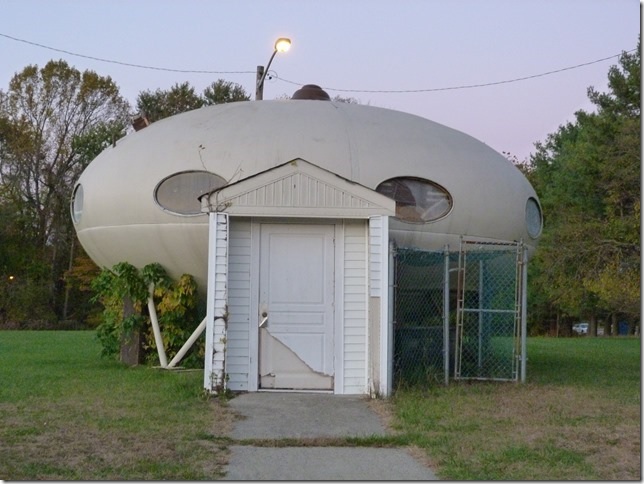 The first of the two videos below was shot by Dan Reed on 071913 - thanks for letting us know about the video Dan. The video clearly shows that the condition of the unit is deteriorating. Dan's video ends with the statement "Someone must save it." We echo that sentiment and wish we were better placed personally so that we could do something about it ourselves but unfortunately we do not have the resources.

The second video is by "The Unknown Cameraman" - the footage appears to be a composite of footage from Vernissage TV showing the Museum Boijmans Van Beuningen Futuro, the Greenwich Futuro and this Futuro in Willingboro. The Willingboro footage starts at 03:13. At one point in the commentary the video indicates the footage has been taken at various points in New Jersey - clearly the Vermissage TV footage was not shot in New Jersey. 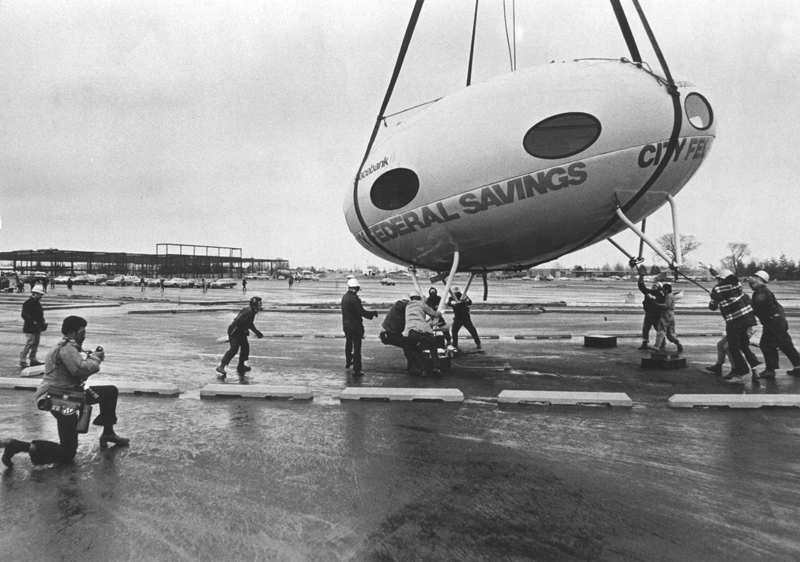 PC Rider photo blogs about his travels on AdventureRider.com. In a post dated 071711 PC Rider included the following photos of the Futuro which include a cool shot of the interior. Since there is snow on the ground the photos must have been taken sometime before the post. 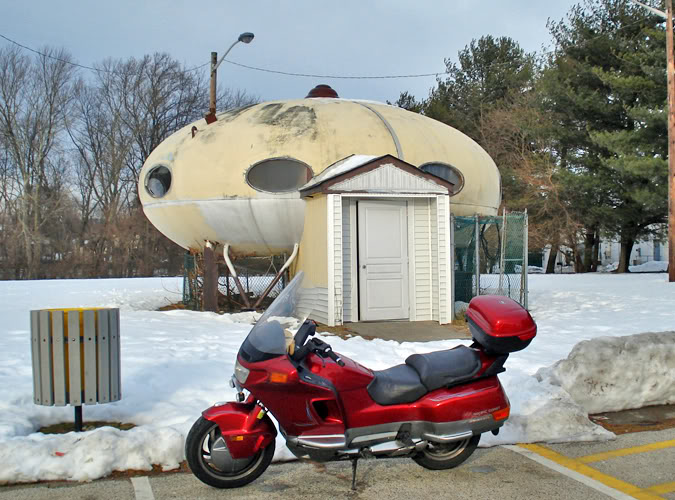 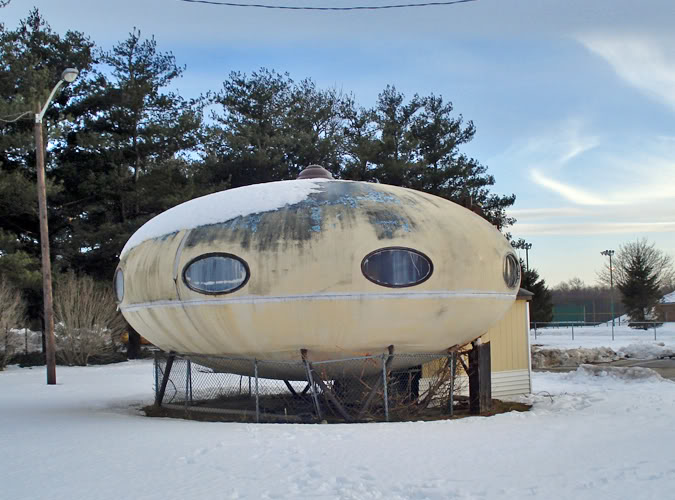 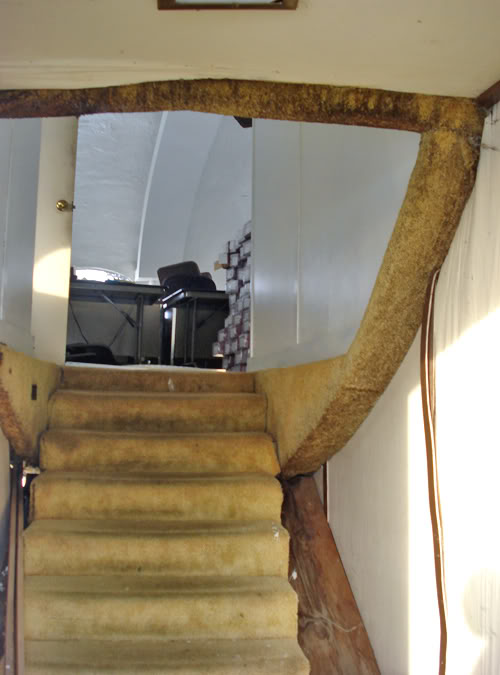 Adding updated information about this Futuro yesterday prompted us to revisit the fact that this example has less windows than is typical. Rereading some documents and old emails led us to the likely answer; a simple and obvious one that had just not registered with us on previous occaisions. Anna-Maija Kuitunen in her final thesis for the Metropolia University of Applied Sciences in Finland "Futuro no. 001 : Documentation and evaluation of preservation need" (available online here) wrote:

"There are many variations of the Futuro house depending on where and for what utility purpose they were made. For example, American markets demanded more spacious rooms with bigger windows which could be opened (Home & Taanila 2004,). In the United States they made an alteration to the steel legs which instead of the steel ring were connected directly to the body of the building. Those Futuros that served as banks could have less windows and those that served as Air Force-owned observation posts could have larger and reinforced windows."

So; it seems the puzzle might not be such a puzzle after all. We know this Futuro was originally used by a bank and so it seems likely that for that reason it was built with fewer windows. Though not stated as a reason in the document it seems not unreasonable to assume that the design change was aimed at enhancing security.

We now find ourselves wondering if the Covington Futuro also served duty as a "Spacebank" at one time. Though nothing we have found to date indicates such a past life it might explain why that unit is also constructed with fewer windows than normal.

An interesting article by Dennis McDonald was posted on phillyBurbs.com July 19th 2012. Based on that article it is now evident that this Futuro was in fact the one that spent time in Lakewood, Ocean County AND that it also spent time in the parking lot of the Village Mall in Willingboro (arriving on that site 121473).

In his article McDonald writes that according to an article in the Burlington County Times the "Spacebank" was open for business within 30 minutes of landing in Willingboro with "space-suited guides on duty".

After several years operating as a bank the Futuro was abandoned and then donated to Willingboro township. In the 35 years since the building has been used as office space by township park guards, the recreation department and the local Police Athletic League.

This Futuro is interesting in that it is different from many others having fewer windows (though there are others that do look similar; Covington for example appears very similar). For a while we wondered if this was even a Futuro and not some very similar creation but based on all of the research we have done everything points to it being a Futuro (including it being the correct size) and so until we find something to the contrary a Futuro it is.

It appears that this example has moved several times; we cannot find an actual date when it arrived at it's current location but historical imagery in Google Earth places it on site as far back as 1995.

Danielle Burrows indicates in a blog post (Dead link - see pdf here) that this Futuro was in the past (early 70's) used as a branch of the City Federal Savings Bank elsewhere in Willingboro. We are wondering if in fact it is the one that was used as a bank branch in Lakewood, New Jersey in the early 70's. Film Director Mika Taanila directed a music video (see below) in 1998 for Ektroverde's track "Inauguration of a Spacebank" and the video features footage shot in 1972 by Samuel Samson of a Futuro being flown in to what does indeed appear to be a Mall parking lot. That Futuro does feature the same smaller number of windows than normal and it is also clearly identifiable as being for the City Federal Savings Bank.

The second video below, narrrated by a local, shows the Futuro as it was 071312.

A selection of additional photographs of this Futuro can be found as follows:

This photograph by speakthesecret_easin taken 062122.