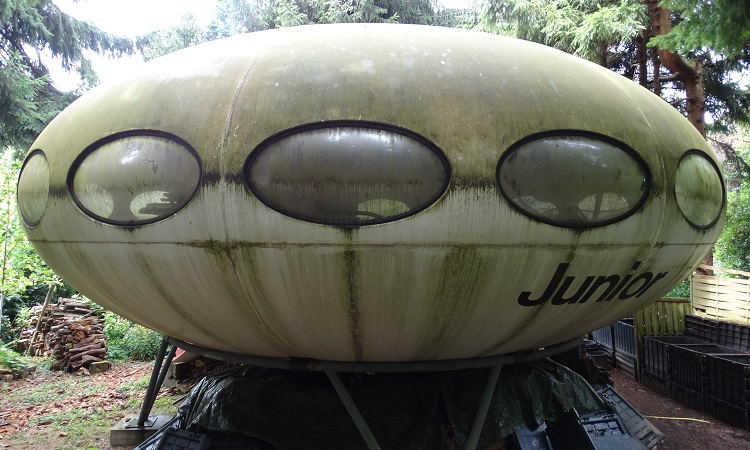 Lotta Karlemann visited this Futuro in June 2020 and was lucky enough to be able to get a look inside. Lotta shared the photos below with us (many thanks Lotta) which include the first we have ever seen of the interior of this Futuro. 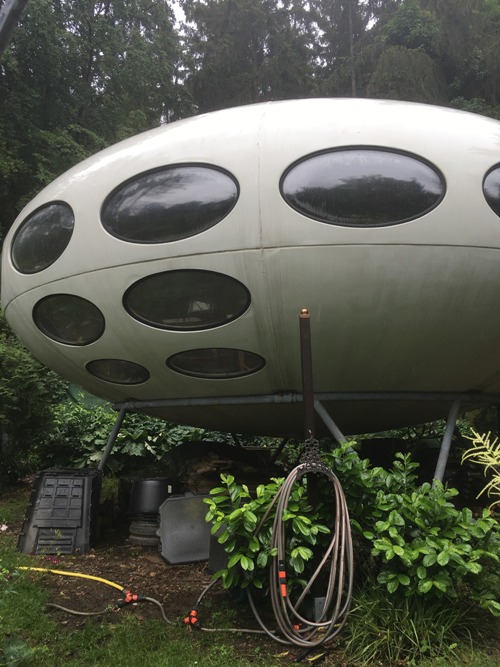 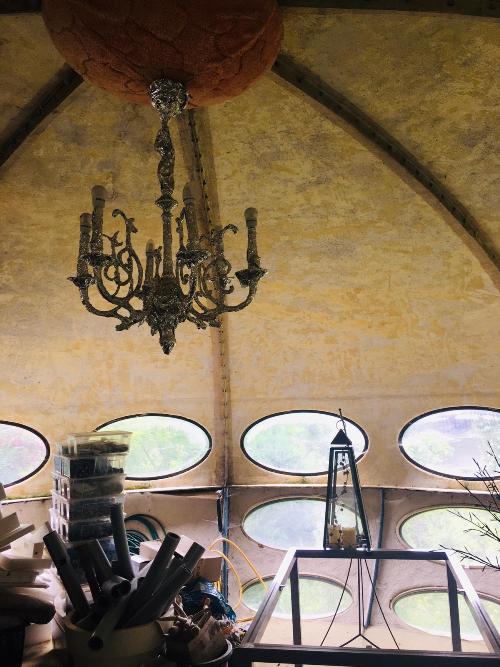 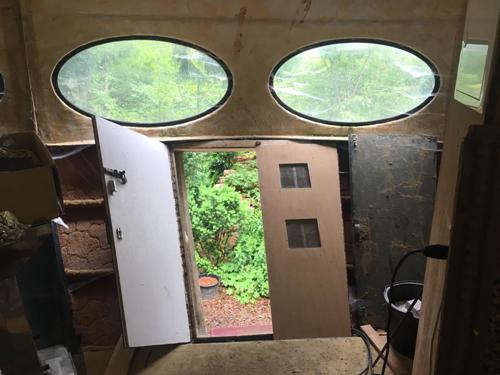 It is always great to see a recent photo of a Futuro. Here we have a look at this unit as it was 123019; the photo was sent to us by Werner Klämke (thanks Werner!)

We received emails from several folks following the 082617 update below that related to the link between Junior and this Futuro. In particular our thanks go to Achim Breiling and Yves Buysse for the information they sent.

It seems Junior still operates and has a couple of websites. The website JUNIOR SystemBau GmbH looks like a rather old website but it does list the company as operating in Goslar. Then there is JUNIOR SystemBau GmbH Karlsruhe; however this website shows the company as being located in Ettlingen. There is no mention of a Futuro on either website but, interestingly, it appears that there is a tie in to Alco, a trademark linked to the Futuro displayed at the IKA Exhibition outside the German town of Lüdenscheid in 1971 (see this photo) and also used by Junior according to the websites.

This Futuro and the Futuro displayed at the IKA are almost certainly not the same unit as there is a difference in the entrance steps; the IKA Futuro has a "slot" cut into the fifth step down (see this photo) that is not present in the entrance steps of this Futuro (see this photo) but there does appear to be some link between this Futuro, Junior, Alco and the IKA. Exactly what that link is remains to be seen.

We received an email from Axel the other day in which he recounted memories of a Futuro located in his home town of Goslar until sometime in the 1980's.

Axel was able to pinpoint the exact location as being 51°54'50"N 10°26'57"E but unfortunately Google Earth has satellite imagery for that location only as far back as the end of 2004.

What was most interesting though was that Axel recalled that the Futuro was located on the property of a company that manufactured aluminum windows and that the company was called Junior. We had always wondered about the prior history of this Futuro and the marking Junior.

Since there is no overlap between the time Axel recalls a Futuro in Goslar and the likely arrival time of this Futuro in Niedernhausen and given the reference to Junior it seems very likely that this is the Futuro Axel recalls that was once located in Goslar.

In July 2016 we were fortunate enough to be able to take a vacation to Europe. The primary destinations were England and Switzerland but we were also able to squeeze in a quick road trip through Germany to visit this Futuro along with those in Taunusstein and Haigerloch as well as the half Futuro in Frankfurt.

The photos below were taken 072616; the condition of the Futuro appears to be largely unchanged from that seen in previous photographs. 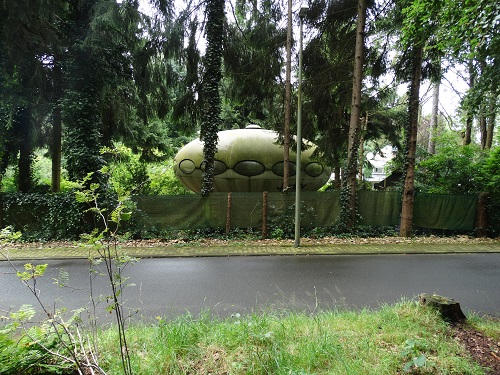 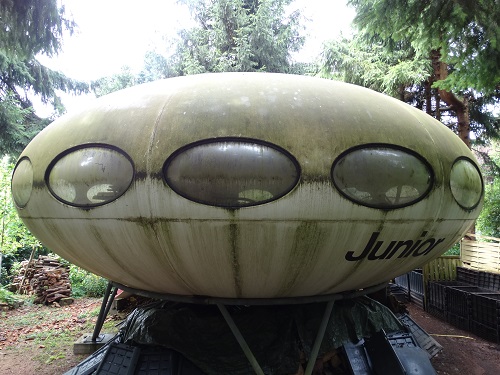 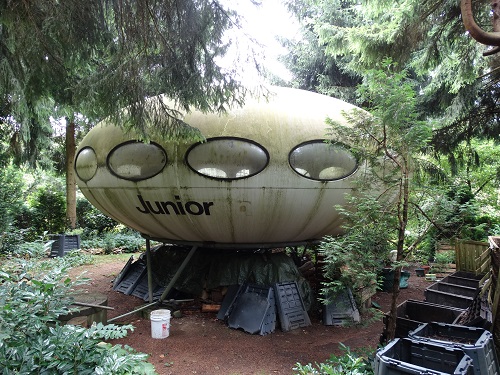 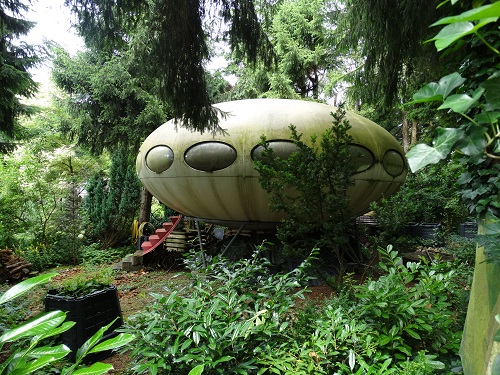 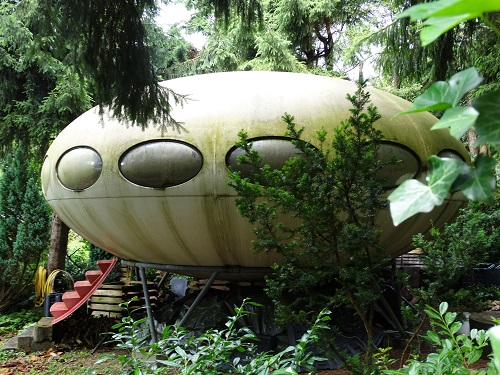 Yves Buysse aka futurohouse has shared many photos and other items on these pages and it looks to us like he recently took a "Futuro Roadtrip" visiting this Futuro and those in Taunusstein and Haigerloch on 031316.

This photo shows this Futuro as it appeared on 031316. The exterior of the Futuro appears to be taking on more and more of a green appearance over time that presumably results from the large number of trees surrounding the unit. Yves, hope you do not mind me sharing your work again. 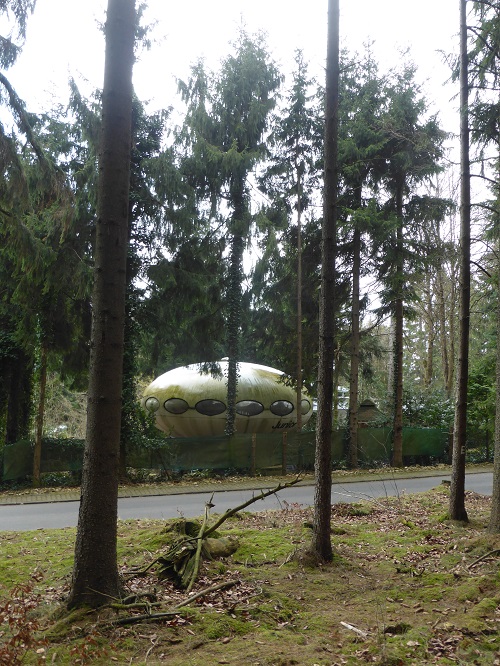 It seems that the idea that this Futuro was one of the three that were located in Belgium in 1971 may be incorrect after all (see the 082314 update below). This conclusion was based on the fact that the Futuro had no lower windows. This photo, shot 021515 by futurohouse (futurohouse's original photo can be found on Flickr here), clearly shows that this Futuro does in fact have lower windows. For more information on this see the Ploemeur Futuro page where this is discussed in detail. 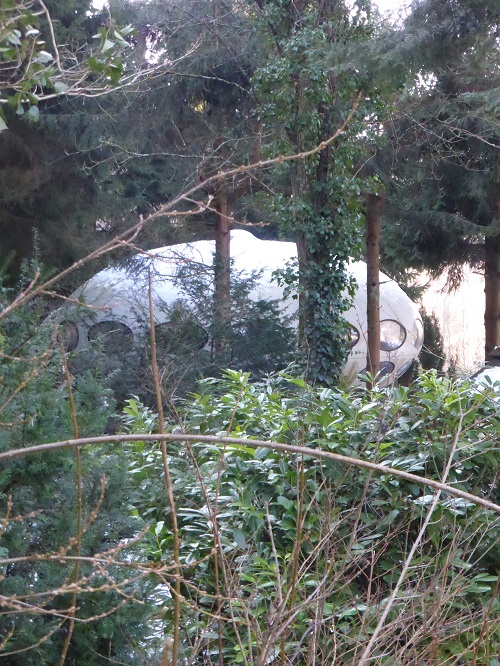 Based on analysis of several photographs by Yves Buysse it seems that this Futuro is possibly one of three that were located at 50°47'18.64"N 4°25'14.94"E in Belgium in 1971 (see this photo). For more information on this see the Ploemeur Futuro page where this is discussed in detail.

In a 230812 article (German - English version by Google Translate here) by Susanne Stoppelbein for the Wiesbadener Kurier we find just a little more information on this Futuro. The article is not actually about the Futuro, it is about a lady by the name of Ilona Goreschian and her love of gardening. However the article does add a little to the information available on the Futuro.

The article reports that architect Jan Goreschian and his wife Ilona purchased the property at Herrenweg 27 "21 years ago"; since the article was written in 2012 that placed the purchase in 1991. The Futuro, described as being once a "hut", now serves Ilona as her garden shed. Of all the exciting plans for the Futuro in its heyday I doubt Matti Suuronen ever considered such a use. He might twitch a little at the fact that the article even mispells his name when reporting that the Futuro was designed by "Matti Suurosen".

Our thanks to Achim Breiling for unearthing this article.

We found out today that Achim Breiling who has provided us with a great deal of information on several Futuro's goes by "futurohunter" on Flickr and that is certainly a very appropriate moniker. Following close on the heels of his tracking down the Matsalu Futuro in Estonia Achim is this time discovering another "new" Futuro a little closer to his home in Germany.

The photos below are all from Achim and were taken 072812 on a day trip where he was able to actually visit three (actually two and a half) Futuros, this one, the one in Taunusstein and the "half" Futuro in Frankfurt am Main. 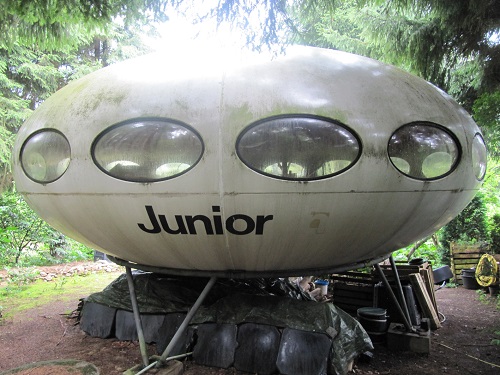 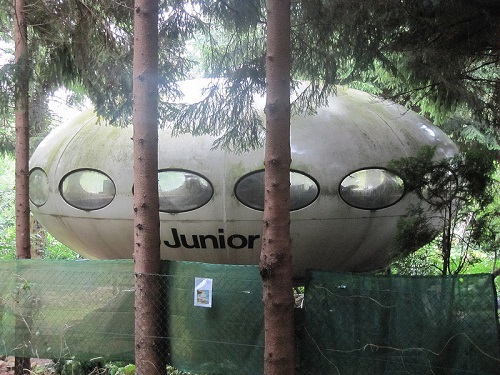 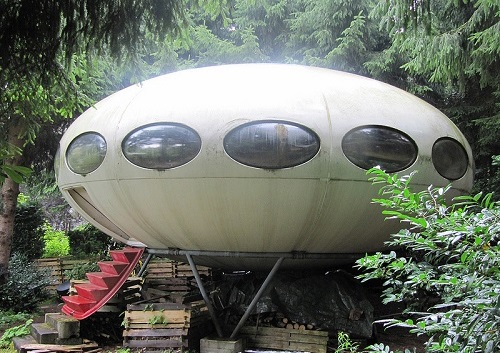 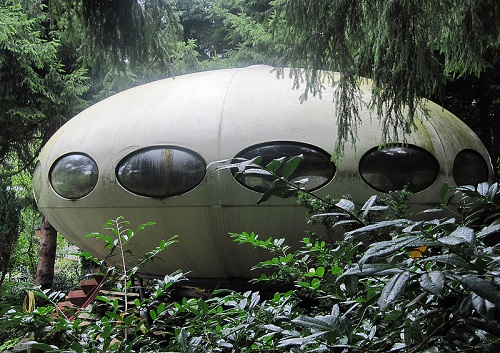 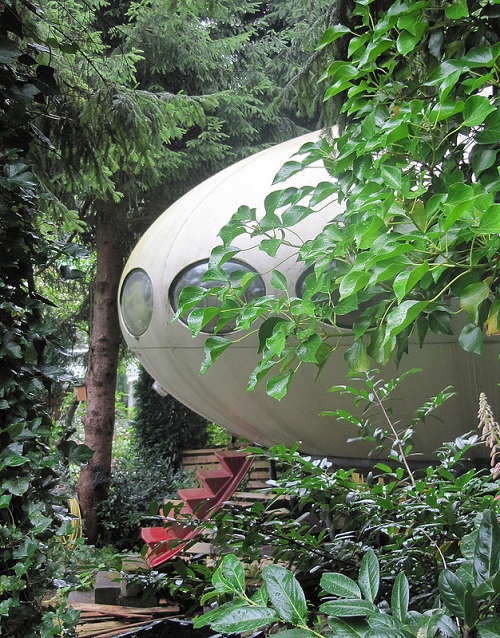 The tale of Achim's detective work goes something like this: All we can say is - awesome work Achim!

Achim says the Futuro appears to be in the middle of nowhere, hidden in the woods and that it appears to be still in use, perhaps as some kind of garden shed. Looking on Google Maps the Futuro is actually about 80 - 100 feet south of a home and it appears to be on the land belonging to the home and so such a use is not unreasonable (though it would not be our chosen purpose for such a treasure).

The Futuro seems exhibit a couple of differences from the norm. It does not appear to have the lower windows that most European Futuros have (Compare to Taunusstein). Though it is not possible to see all around the Futuro the lower windows are certainly not present on the segments opposite the door which is where they commonly are. In addition there is a set of lockable doors installed that allow the Futuro to be secured even when the steps are down. It is not possible to determine if this was a modification at the time of manufacture or something that was fitted by the owners at a later date. These doors are clearly visible in the photos.

At this time that is everything we know about this Futuro so please, if you have any information you could share it would be much appreciated.

One other interesting fact not specific to this Futuro came out of Achim's Futuro outing. Including this newly discovered Futuro there are actually three (or two and a half) Futuro's in a relatively small geographic area around Taunusstein in Germany. One is on the grounds of Expotechnik Holding GmbH & Co. KG in Taunusstein, the second (the half) was donated by Expotechnik to a youth center in Frankfurt am Main and the third is this one. There is no actual evidence for it but given that Expotechnik was involved in "exhibitions" and the fact that their website includes imagery of what appears to be Futuro's not fully assembled it is possible that Expotechnik was a manufacturer or distributer of Futuros (and that maybe there are more in the area waiting to be found; though there is no evidence for that it is sometimes interesting to hypothesize.

The video below is the extract from "Weltmarktfuehrer - Die Geschichte des Tan Siekmann" mentioned above.