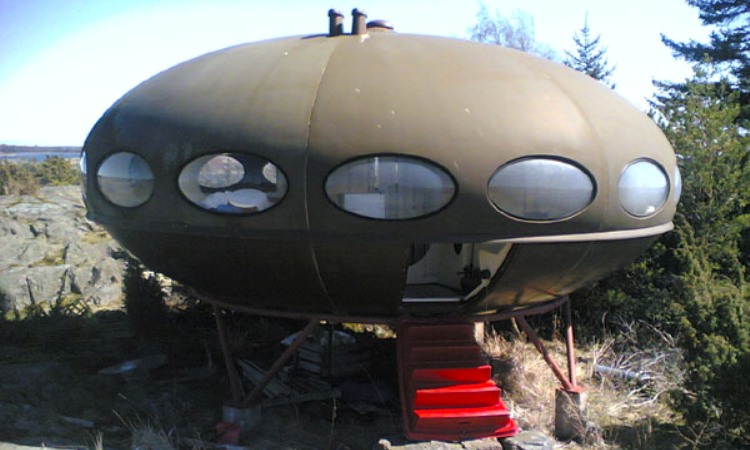 This is one of the least photographed (and least accessible) Futuros so it is always a "red letter day" when we get to see a new photo; in this case a rather interesting photo posted to Facebook recently by Finn Flyer Marina Ab which shows the Futuro surrounded by some wooden scaffolding.

We are told the photo was taken in September of this year and though we have no way of knowing what the scaffolding is there for it seems most likely that the exterior finish of the unit is getting or about to get some attention. 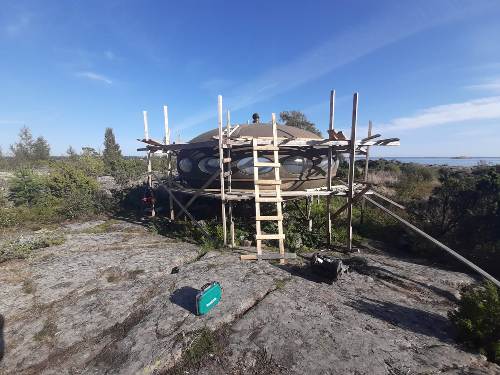 This is one of the least photographed Futuros and the photo below is the first one we have seen in a long time. It was posted to Instagram by lvikman on 082617. The photo is also the first one we recall taken from the water. 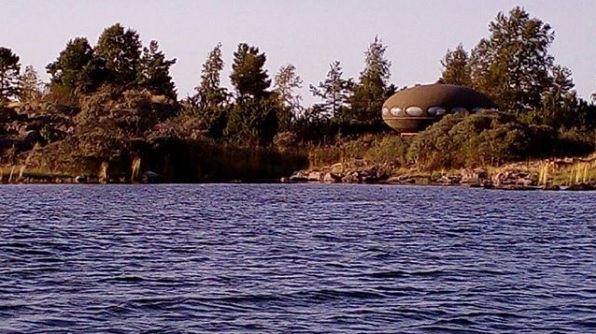 We have now determined that we need glasses! We spent literally hours looking at Google Maps and Google Earth for this Futuro. Yesterday Achim Breiling emailed and told us he had found it. Lo and behold it is on an island that we must have looked at a dozen or more times; in fact we looked at every island in that area multiple times but we never noticed it. Admittedly the resolution is not great but even so we have no idea how we missed it. Anyway our thanks to Achim for finding this one.

The Futuro is located on a small island called Storbroskär around 5 miles or so almost due West of Mariehamn at 60°05'19.31"N 19°47'49.08"E. The images below are taken from Google Earth and, despite the somewhat low resolution, in our opinion clearly show the Futuro at this location; the size is correct as is the color, the shadows cast also appear as they should do and the landscape around the unit matches (as best you can determine from the imagery) photos and videos of the Futuro's location. One other interesting thing to note; in the book "Futuro: Tomorrow's House from Yesterday" edited by Marko Home and Mika Taanila we are told that this Futuro was "painted brown to blend in with its surroundings" and the satellite imagery shows that was actually very effective (and perhaps that is our excuse for not spotting this when we looked at it many times).

The three captures from Google earth below show: 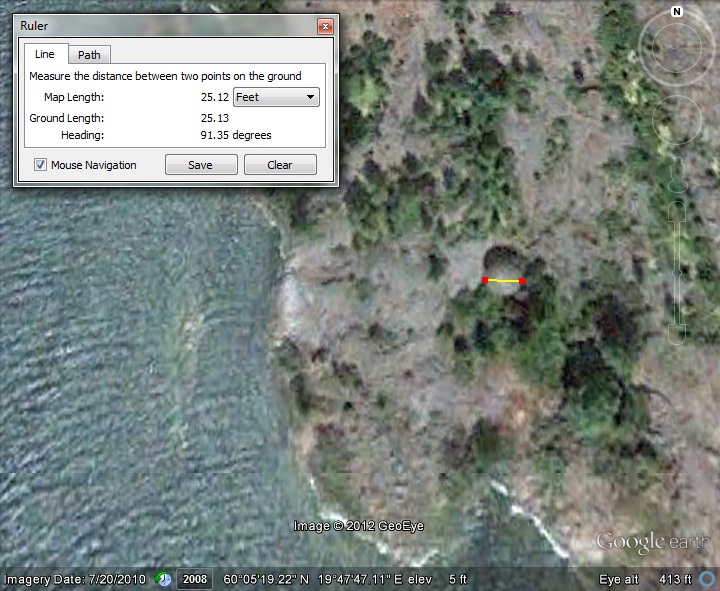 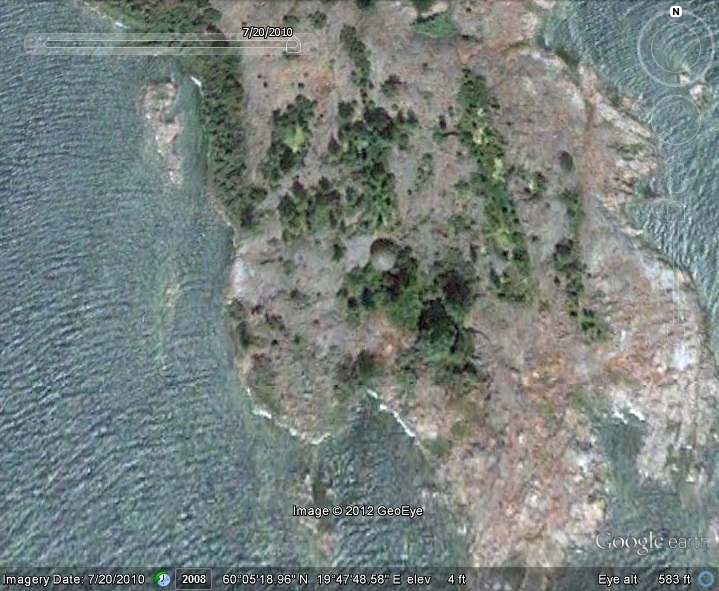 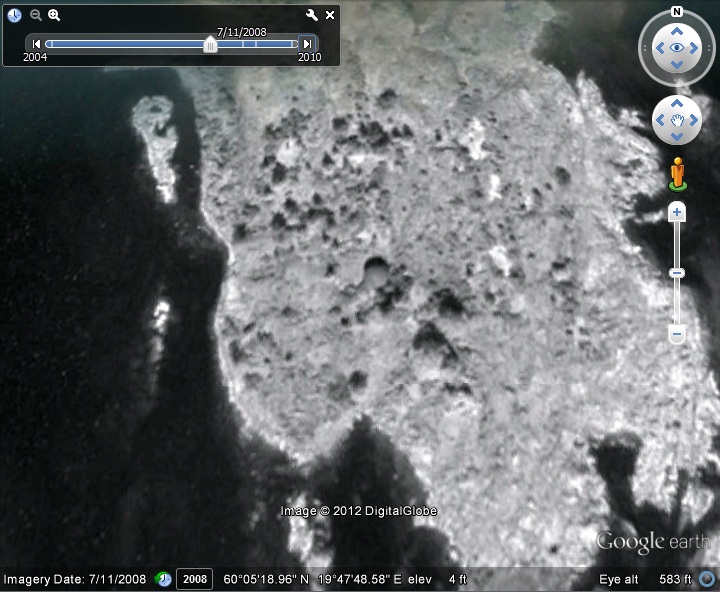 Below are several photos from a photoblog to be found at fotodagboken.nu (Dead link - pdf here). Though we are sure the translation is very inaccurate (Google does not do well with any of the Scandinavian languages) the brief comment that accompanies the photos translates to "I, Victor, Patrick and Saga were off with our boat to Patrick and Titti island Storbroskär and watched the saucer house." Even if the low res Google Earth imagery did not convince you we are sure that comment completely confirms Storbroskär as the correct location for the Futuro; not only is the name of the island mentioned but the comment also refers to "Patrick and Titti" who we know to be the owners of the Futuro.

We have not been able to find any contact information on the site; the url includes "carlsson" so maybe the gallery belongs to the Carlsson family? In any case if you know how we could get in touch with the owners of these photographs please let us know so we can check if it is OK to continue to display them here. 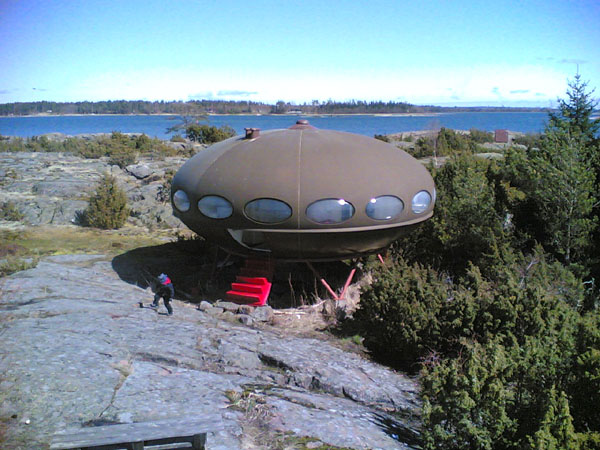 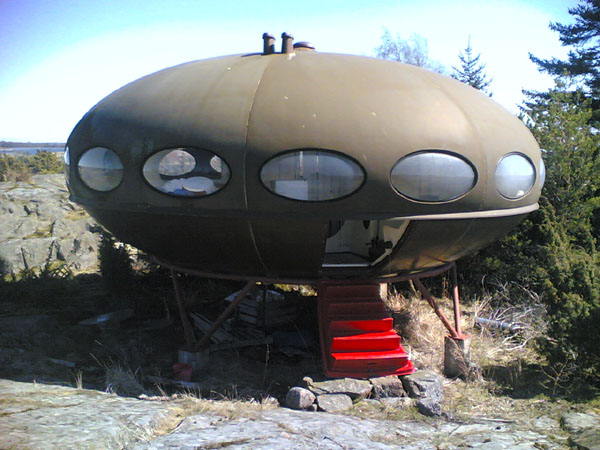 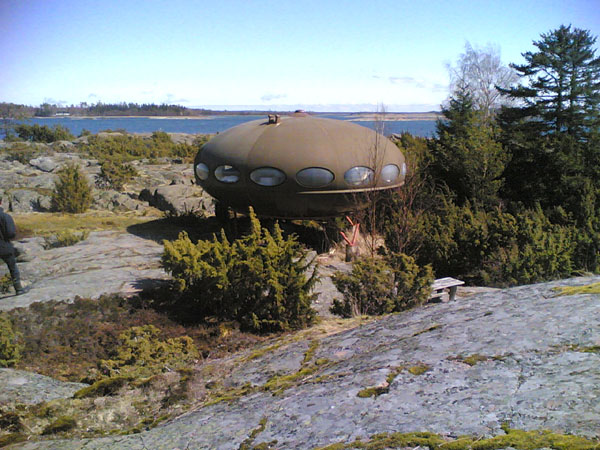 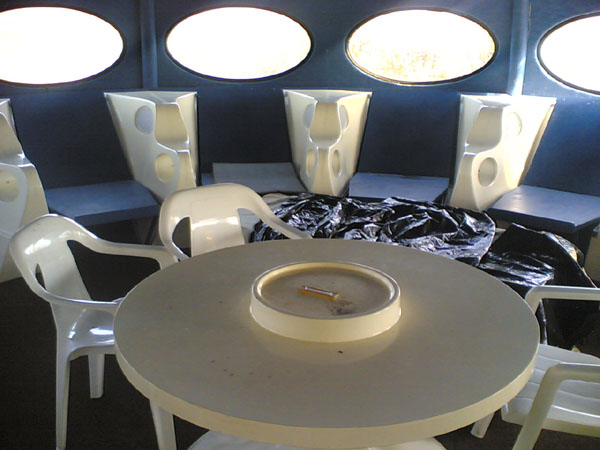 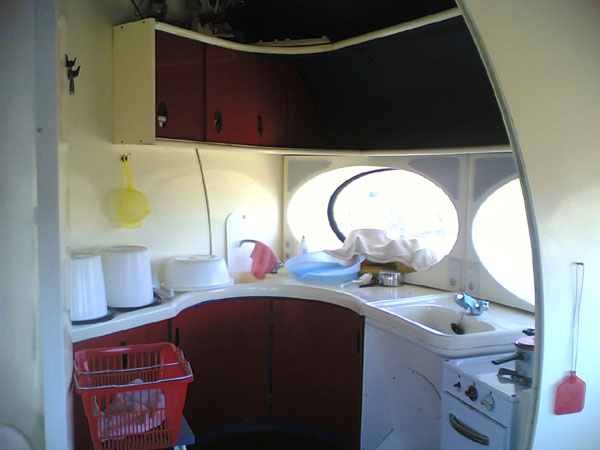 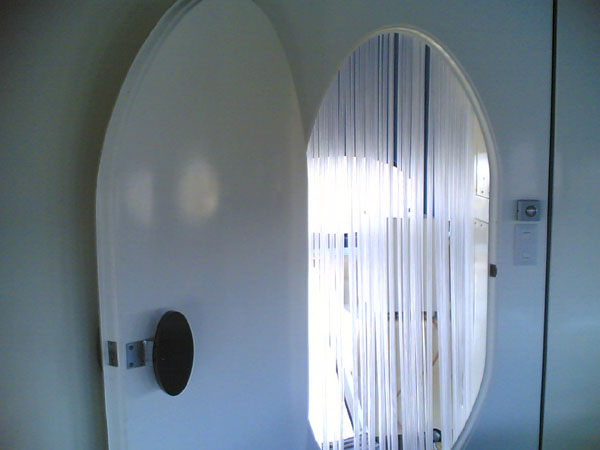 From the Marko Home/Mika Taanila edited 2003 book Futuro: Tomorrow's House from Yesterday" and the included DVD we learn something of the Futuro House that sits in the Aland Islands.

We are told that the Futuro, painted brown to blend in with its surroundings, is still the property of its original owner and that the Futuro is still used as a base for weekend fishing trips. The book was published in 2003 so we can confirm the Futuro as still on site at that time.

An 111603 article on the website Swedish YLE (Swedish | Google Translate To English here) similarly confirms the Futuro on site in 2003. In this article we learn that the Futuro is now owned by Titti Sundblom and Patrik Westergård and that it was originally purchased by Titti's late father, Dan Sundblom. We also learn that the Futuro does not have power running to it and so it is used less often that it once was.

We are able to place the Futuro on site much later than 2003 by referring to Anna-Maija Kuitunen's final thesis for the Metropolia University of Applied Sciences in Finland. We learn that in an interview on 040610 the owner indicated that the Futuro had been on site since 1971 and that it remains in good condition with various repairs having been undertaken over the years to maintain its condition.

The latest date we have been able to confirm the Aland Futuro as still being on site is 062211 and that is provided by an article published on the website HBL.FI (Swedish | Google Translate To English here) that was initially published 061607 but was updated subsequently updated on 062211.

In this article we learn a little of Dan Sundblom's original reasons for purchasing the Futuro. His daughter and current owner Titti relates how for her father it was "about finding a house that you did not have to maintain because he was not a very practical person".

The Finnish band Fuerteventura (Dead link - pdf here) produced a music video that featured the Futuro for their track "Saucer", the second single from their debut album "Take Me To Your Leader". In the video the band is chased by an alien and they take refuge in a flying saucer - the Aland Futuro. You can check out the video below.

The Aland Islands Futuro has also made an appearance in print. Britt-Marie Trensmar, in her book "Rötter och arv : tolv åländska hem" (ISBN10: 9515226619), discusses and illustrates homes and their interiors across the Aland Islands and the Futuro House is included.

We have not yet been able to establish the exact location of this Futuro. The Google Map above is centered on Mariehamn, Aland Islands. The various sources referenced above give clues as to the location (near Mariehamn, near Jomala, southwest of Mariehamn to name but a few) but to date pouring over Google Earth has not revealed its whereabouts. We will of course continue to search but should you know where it is located please let us know.

The two images below are screen captures from the video short "Hideaway In Archipelago" which was filmed in July 1997 by Mika Taanila. This video is one of the "DVD Extras" you get with the DVD of Mika Taanila's 1998 film "Futuro: A New Stance for Tomorrow" that is included with the Marko Home/Mika Taanila edited 2003 book Futuro: Tomorrow's House from Yesterday. 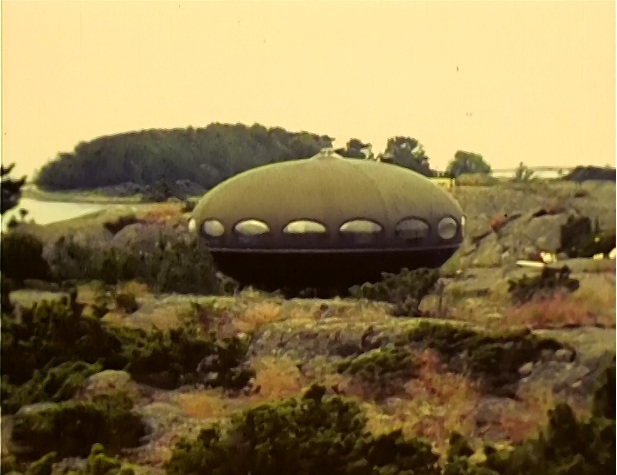 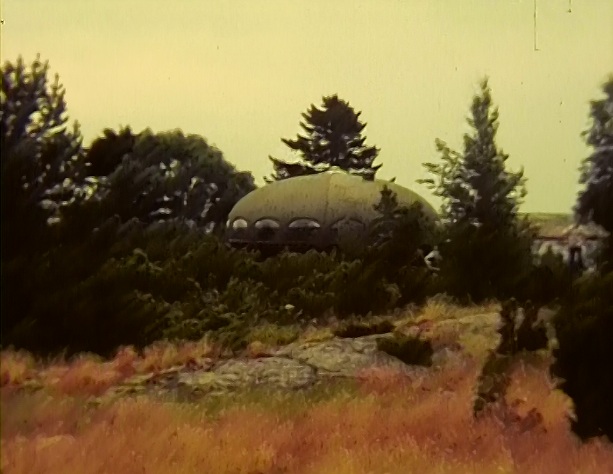 These next two images are captured from this video on Youtube. The video is actually just a series of photographs played in sequence none of which are attributed. When researching the Aland Futuro we subsequently saw these same images in an article on the website Swedish YLE. We are unsure of the origin of the images so if you know or if you are the owner please let us know so we can provide correct attribution here. 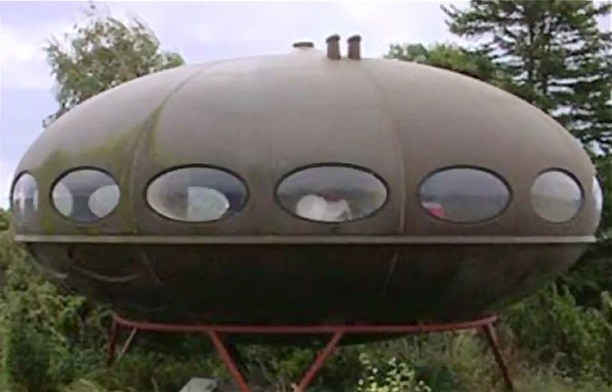 Finally, as mentioned earlier, this video features the Finnish band Fuerteventura (Dead link - pdf here) and their track "Saucer" which was the second single from their debut album "Take Me To Your Leader". In the video the band is chased by an alien and they take refuge in a flying saucer - the Aland Islands Futuro.

This screenshot from a video by prefab_and_more posted 061122.

The original video can be seen on Instagram here.